Shortly after midnight eastern tonight, Travis Outlaw let the twitterverse in on his inner-most feelings. 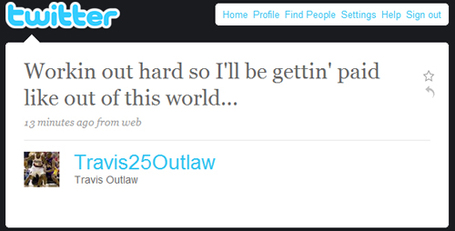 Outlaw's grandiose tweet recalls one of Jason Quick's Greatest Hits, which, amazingly, was written nearly a full year ago.  In that piece, Outlaw talked honestly about his desires to start and get more shots. He was ready for his career to take a step up.  The honesty was refreshing then and it's refreshing, although a little bit foreboding, now.

As we know, the 2008-2009 season didn't exactly play out like Outlaw expected.  Rather than starting, Outlaw settled into a productive bench role, establishing himself as a reliable late-game scorer with an array of stunt jumpers that should only be attempted by trained professionals.

Entering camp this season in the last year of his contract, Outlaw figures to continue filling that scoring-off-the-bench role, a role that is now less valuable with the additions of a healthy Martell Webster, free agent Andre Miller and Outlaw-clone rookie Dante Cunningham.

It's difficult to see, in the ultra-competitive environment that is the Blazers' rotation, exactly how Outlaw will find a yellow brick road to gettin' paid.  Indeed, as we discussed this past weekend, he seems to be a likely candidate to see less, not more, minutes this season.  I wouldn't be surprised at all if he saw less shots as well. For Outlaw, Minutes + Shots = Dollars.  This equation is heading the wrong direction for Trout. You might say he's swimming upstream (my bad, indulge me).

Earlier this summer, Greg Oden made a similar "Contract Year" declaration, which was particularly grating and ill-advised given his performance relative to expectations up to this point and the absolute certainty that the Blazers will pick up his team option for 2010-2011 even if he were to play 0 games this season.

But with Travis's tweet, and the stark(ville) honesty that goes with it, we're looking at a totally different dynamic: this is less about Oden's faux-bravado and faux-self motivation and more about a player looking to make the most of a career at the crossroads.  Because if Outlaw is, in fact, looking for big money next summer, Portland is not a likely final destination.

But here is the relatively frightening question that Team Outlaw should be asking: will there even be any big offers next summer? What, truly, will be the market for Travis Outlaw?  He will be entering the market along with a loaded free agent class, sporting a resume that boasts extremely limited starting experience and some noticeable holes in his game.  And it's not like his former Blazers benchmates who hit the free agent and trade markets this summer -- Sergio Rodriguez, Channing Frye, Ike Diogu , Shavlik Randolph, etc. --  set the world on fire.

Without question, Outlaw is a significantly better player than all of those guys mentioned above.  But GMs next summer will likely find themselves asking the same questions of Outlaw that they asked about this year's ex-Blazers. "How much has he benefitted from playing next to a solid core of talented players?"  "Will his succcess translate to our system?"  "Can he develop outside the defined role that he's played up to this point?"

Those have proven to be very difficult questions for Sergio, Channing, Ike and Shav to answer.  And they are tough questions for Outlaw too.  As of this writing, it's unclear to me who, exactly, will be lining up to fill Outlaw's bathtub with 100 dollar bills.

Given both the grim economic situation and his equally grim playing time situation, it's probably best that Outlaw keeps his hopes grounded on this planet for now.  Or, he could always request a trade. If Mars Money turns out to be his number one priority, and I wouldn't blame him for that at all, getting traded as soon as possible would seem to be his best bet.