In light of Ben’s post where Hollinger is quoted,

Nobody talks about the Blazers as serious contenders in the West, but we should. Portland had the best scoring margin in basketball after the All-Star break last season, and as I keep repeating, scoring margin predicts future success better than winning percentage.

I’d like to take a look at what that statement signifies.

The only research I’ve ever done which is basketball related, is the direct correlation of scoring margin (Point Differential) to win %. That relationship could not possibly be more of a direct one to one relationship.
e.g.

14 years of NBA data (all teams included) show that a team with a point difference of "0" (i.e. scoring margin) crosses the line at approximately 40.95 wins. Frankly,  I personally don’t see how you could get any closer to a direct correlation unless this data resulted in exactly 41 wins (a .500 season),to which it almost did.

Here’s a chart of those 14 years. Number of wins at the top and point differential at the left.

If I have evaluated the data correctly the largest deviation from this straight line at any win% level (listed as number of games won in this chart) is +2.9 points to the high side and –2.6 to the low side. This is an extremely significant number, in 14 years not one team has deviated more than 3 points from this median. If you didn’t know a teams scoring margin, by choosing the median if given the number of wins you could tell within 3 points what their scoring margin was. 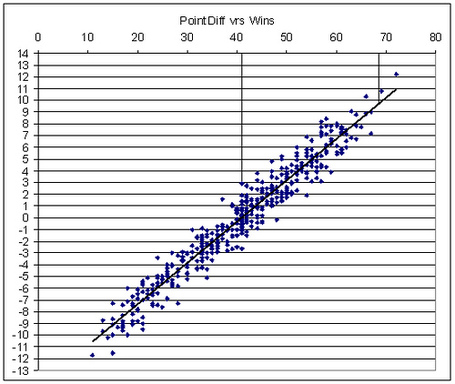 In my mind that declaration (quote above from Hollinger) can only be interpreted one way.

It therefore also means that this must true for a team that is in decline. So a team declining from prominence will have a better win% than what their point diff would suggest.

To restate this, hopefully a little better, If scoring margin is a better indicator of future success, then a team on the way down should have a point differential which is a little worse than their record (win%).

So if Hollinger be correct, point differential leads the way, whether that team is going up or going down.
Scoring margin is a little better than win% if going up, a little worse if going down.

Is this true, I don’t know? But before San Antonio upgraded most would agree they were a team in decline and they had point diff of 3.8 last year which should have resulted in about 49-50 wins and they had 54 wins. So in SA’s case, scoring margin was leading the way down. So with a sample size of 2, Blazers and San Antonio, it is true.

Update: I hate when I have a moment of clarity long after posting.
Bottom line is this: 54 wins means absolutely nothing. going from 41 to 54 means nothing. It does not tell you anything about how many wins will be added next year. You can’t add 13 to 54 and get 67. The more pertinent question is, did I have a point difference of 3.0 or 9.0 when I got those 54 wins. Take two teams with 54 wins, one with each of the afore mentioned scoring margins, and I’ll tell you who’s going to beat who in the near term. (this was my take on Hollinger when putting up the post, I hope it came thru)

What does this mean for the Blazers next year?

The very bottom line is a projection of how many games we should have won if based on scoring margin.

This table shows that scoring margin is leading win%. 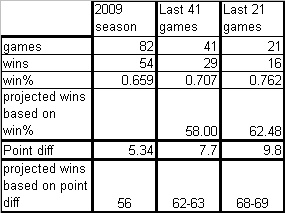 So scoring margin kept leading by a larger spread. See last paragraph where the last 21 games was not a weaker schedule than the last 41 games.

The Blazers had a point diff of 9.8 for the last 21 games, which on the chart below shows a 68 win season actually about 68.8. Compared to a win % which would have yielded about 62 wins. All things being equal a 62 win season should have around a 7.4 scoring margin. We were 2.4 points above this level for those last 21 games.

So point differential is leading win% in both of the later segments.

The point diff for the first 41 games was 2.91, which would be in terms of games won, a 49 win season. So the Blazers scoring margin went from lagging win% in the start of the year to leading win% by the end of the year. 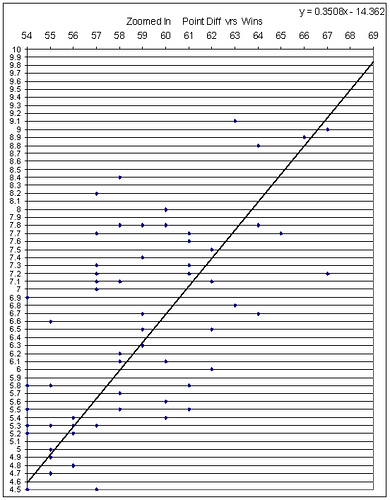 One way to look at the chart above and probably the best way, is  to note that a point differential above the median line is leading win% rather than lagging it. Which is how the Blazers ended the season. Scoring margin leading win%.

If Hollinger is anywhere close to being accurate 60+ wins is close to being in the bag. The only caveat that I did not discuss in this post is how far wins can deviate from point diff. Looking at the chart this appears to have a range of about 20 games wide across the median. i.e. +/- 10 games. But in reality the widest range I could find was about 14 games at the widest point (using increments of .1 for point diff), which yields a +/- of about 7 games. What this means is we could be above or below by 7 games and still be within normal. Taking the worst possible scenario still yields a win of 61 games if the last 21 games are chosen to conjecture upon. If the last 41 games is chosen a worst case senario is somewhere near 56 games.

But then again in this worst-case scenario, win% would be lagging point differential by the widest of margins. So if it were possible to take the end of last year and project it onto this year, 56 wins is our floor. Any way you look at it, things are looking good.

How much 4 rookies with a year under their belt, Andre Miller, a healthy Oden & Martell, and a slashing Nic counteracts a weaker 2nd half schedule is anybodies guess.

We’ll have to play the games to find out.