The Next Steps For Brandon Roy

Share All sharing options for: The Next Steps For Brandon Roy

Shortly after the ink dried on Brandon Roy's newly-signed contract extension, once both sides were ready to put the negotiations behind them, Kevin Pritchard turned to Brandon Roy and asked the same question that I asked last week, "What's next?"

But Pritchard, as something of a motivational guru and the man responsible for direct depositing roughly $82 million dollars of Paul Allen's money into Roy's bank account, phrased it as a philosophical challenge: "I said, look, you have more money than you'll ever be able to spend. What is your destiny going to be? What are you going to be known for? Do you want to be a champion?" 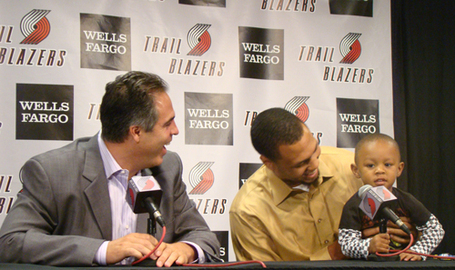 Pritchard shook his head almost wistfully -- which struck me as odd because the conversation had occurred only a day or two before we spoke -- as he recounted Roy's reply, "Boy, he was very adament about becoming a champion. He. Wants. A ring."

And so do Roy's teammates.  And the coaching staff.  And the management staff. And, let's not forget the owner.  There are a lot of ringless fingers in the organization starting to seriously get their hopes up for the ultimate prize.

Goals are good.  Plans are better.  And Pritchard and Roy, supposed contract negotiating rivals, presented themselves in perfect lockstep at Friday's press conference: their shared focus during the open media session was on the team developing, the organization growing, a master plan laid years ago starting to fall into place. But that's what was next for the team.  After the open session concluded, both Brandon Roy and Kevin Pritchard talked with Blazersedge about what they see as the next steps for Roy, the player and person.

The first step, according to Roy, calls for him to adjust his game to fit with Andre Miller, "The first thing [Kevin Pritchard] said [after we signed Miller] was that Andre's going to want to run," Roy chuckled, "I said I'll be right out there on the wing for him."

Asked if it was a valid criticism to say that both he and Miller need the ball in their hands to be successful, Roy said flatly, "No, not at all. That's something I've been working on. [This summer] I've been doing a lot of running the floor and catching-and-shooting."  In Roy's eyes, last year's ball dominance was necessitated by the team's personnel rather than a personal proclivity for pounding the rock. "People give me knocks but I was in a situation where I had to handle the ball. I wasn't in a position to run the floor," Roy said, his eyes widening. "Now that we have a point guard like that, that's a part of my game that I can show now. That I can run, that I can slash, that I can get more easy baskets.  I'm looking forward to playing with Andre."

Roy's personal improvement plan extends past getting acclimated to a new backcourt mate, though, and he has spent time since the team's season ended studying the league's elite players.  "A big thing I'm focusing on is trying to continue to improve my mid-range game. I've watched a lot of tape on Kobe, I listened to a lot of things they say about LeBron, I think that mid-range game is really, really where championships are won. They can double you from the wing, but it's harder to double guys from that pinch post area. I'm really trying to improve my mid-range game, going right, going left," Roy momentarily stopped the basketball lecture to smile devilishly, "I don't want people saying I go left all the time. I want them to see that I'm strong going right too."

But Roy acknowledged that his role this season will not only change on the court.   For starters, Greg Oden can expect a new-look captain. "Last season I just wanted Greg to be comfortable. Whenever you sit out a full season and then [during] your second year you have so much expectations on you, I didn't want to push him too much. I just wanted to let him get out there and get a feel, get his feet wet."

But this season?  "It will be different. I think we'll be much harder on each on another just because we know how much we are capable of doing.... Now, I think my approach is to push him, to motivate him. He has to understand that he's a huge part of this team. We need him to understand that and motivate himself to get to the level we need to be a championship team."

So, then, is it time for Roy to get in Oden's ear?  Yes, but not exactly, according to Pritchard, "Here's what's going to happen in my mind: Andre, Steve, Rudy and Brandon will be a leadership group so to speak. Now they all have some experience, right? They've all been in the trenches. I want to see them as a group lead the organization, lead the team. Because as backcourt guys it's a little bit easier. That doesn't mean LaMarcus doesn't have a hand. But I believe in a collective responsibility."

That collective responsibility, when it comes to motivating Greg Oden, clearly extends to Pritchard himself.  Asked about comments he made earlier this summer expressing an expectation for Oden to come into camp in top shape, Pritchard stated directly, "I'm not afraid to speak my mind. I'm not afraid to challenge players. I've been in a locker room. I've been on good teams and I've been on bad teams."  The implication, it seemed to me, was that effort and dedication to craft is what had distinguished good from bad.  As always, Pritchard was careful to close on a positive note, "But I liked what I saw [from Oden at the Team USA minicamp] in Las Vegas."

But Oden's motivation is far from the only unresolved situation facing the team, and Roy, as the new season approaches.  Let's not overlook a total of three question marks in the starting lineup.  "I think it's an open race," Roy stated, before laughing as he recounted his first conversation with Coach McMillan after the Miller signing, "First thing when I called Coach, he said Andre and Greg are coming off the bench. I said, 'Coach, you sure about that?' He said, "Yeah! We won 54 games with this team. That's what we are going to go in with."

Pressed for who he thought would be the opening night starters, Roy echoed Pritchard's philosophy that competition breeds success,  "I think it's an open race right now. Joel and Greg are going to battle at that center spot. The small forward spot is going to be a battle with Martell and Nic. And at that point guard spot. The exciting thing about it is that's going to make us better. Martell and Nic going at it, Martell just coming back is going to make us better. [And with] Blake or Andre coming off the bench..."

Roy trailed off a little bit and then shook his head, "I'm like 'woooow' we have a really good team. Our practices are going to be pretty exciting."

Perhaps the stickiest question, one that won't be answered until training camp at the earliest, is how Roy's new, big-dollar contract will play in a locker room stocked with guys still on their rookie deals.  While Roy has always been a cut above on the court, he's now about 10 million cuts above everyone else off the court.  For now, Roy doesn't anticipate that "my guys" -- as he referred to his teammates on Friday -- will have a changed perception of him. "I think my guys are going to look at me the same way. They know me. I've never been a guy about money. I've been a guy about basketball. My teammates know they can come to me about anything. There's times when Steve Blake gets on me. There's times when I'll have to get back on Steve. None of that changes because of contracts."

The more he talked about the contract, the more serious and forceful he became. "That's one thing I don't want to change. I don't want anybody to treat me any different because of my contract. I want people to treat me the same. Because that's how I am. I'm going to stay the same person I was before I made any money."

Remaining the same person off the court doesn't necessarily mean that fans will see the same Roy donning the red and black this fall.  Indeed, the degree to which Roy feels dually motivated by both the expectations and hate that come with a max contract was unmistakable, and he chose to close our conversation with a clear shot at those who may still doubt him. "I take criticism as a challenge. I love to hear it... I'm listening to all the things they say about me that I'm not good at and I'm going to try hard to improve those things."

So what's next for a focused, motivated Brandon Roy now that he's locked in long-term with more money than he can ever spend and the stability that goes with it?  The world, chico, and everything in it.