10:42AM: ESPN Sportscenter's report: "Hedo Turkoglu, according to ESPN The Magazine's Ric Bucher, he and the Trail Blazers have been meeting and Hedo Turkoglu is still in Portland where the two sides are hammering out a deal."

11:17AM: Michael Grange of The Globe and Mail is reporting the Raptors are close to signing Shawn Marion to a 4 year and $34 million deal. This would leave the Blazers as Hedo's only serious suitor.

I think signing Marion, adding the likes of Kleiza and Delfino and maybe finding a way to keep Parker (long-shot; Real Madrid is coming hard) is the most direct route to 45+ wins. I'd like to see them find a really solid water-bug type as a back-up point guard too, but I don't think the money is going to line up.

But at some point Marion's going to have realize that the market really has shifted in a very short amount of time. If I'm him I take the Raptors money and be glad of it.

Doesn't sound like Hedo is in the cards for Toronto. Hopefully, from the Blazers standpoint, this helps deflate Hedo's asking price a little bit.

I am surprised but not shocked to wake up this morning and not find a report that KP sealed the deal with Hedo last night. Are we in store for another quiet day of non-news? Let's hope not. 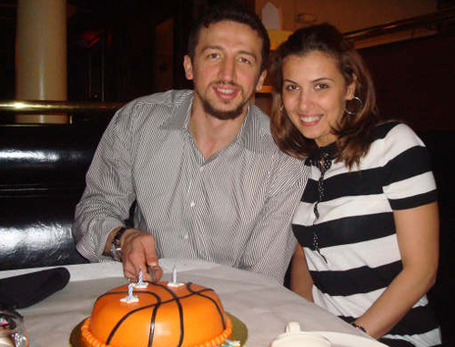 While the Portland Trail Blazers hosted Hedo Turkoglu for an elaborate free-agent visit Thursday, the team that could spoil the party was still plotting.

As of early Friday, the Toronto Raptors had yet to decide whether to trump the Blazers with an offer for the 30-year-old forward. Portland is offering a five-year deal for approximately $50 million. Toronto, which is believed to be the preferred choice of Turkoglu's wife, could beat that by about $800,000 per year once it clears cap space through trades or by renouncing its rights to free agents Shawn Marion, Anthony Parker, and Carlos Delfino.

It may seem like the Raptors are mere spectators in this free-agent circus, but they're quietly active behind the scenes. The team has had exploratory talks with several free agents, though they have yet to offer a contract to anyone.

Toronto has had similar talks (for different amounts of money) with several other players, including Linas Kleiza, David Lee and Hedo Turkoglu. Several league execs believe Turkoglu prefers to play in Toronto (because of its international character) instead of Portland, but it's not clear whether the Raptors will make an offer.

By renouncing Shawn Marion, Anthony Parker and Carlos Delfino and waiving Quincy Douby, the Raptors could clear enough cap room to offer Turkoglu $56.5 million over five years. But that would force the Raptors to fill out their roster with minimum-salaried players, and they're worried about not having enough depth. So at present, they're leaning toward re-signing Marion and Delfino.

Once the Blazers make an offer to Turkoglu, the Raptors will decide whether to try and outbid them.

As far as Turkoglu is concerned, he is being given the full-court press by the Trail Blazers and visited Portland on Thursday. Reports say that the Blazers could offer Turk a five-year, $50-million contract. The Toronto Raptors are also said to be in play for Turkoglu, 30, a versatile small forward who played the past five seasons in Orlando.

Smith said the it would be "a long-shot to get something done" with Turkoglu, but added that he had spoken with Lon Babby, Turkoglu's agent, and they agreed to talk before Turkoglu accepted a contract proposal with any team.

"We had a conversation with Lon about where we would go when he comes back," Smith said. "We'll see if it makes more sense to us. We like Turk, there's no question about that. But we've said that it was a long-shot to get something done."

Sounds like a return flight to Orlando may not be in the works - at least not until Saturday.

Until then, the Blazers plan on showing and telling Turkoglu millions of reasons why he should sign with the Blazers this offseason: 5 years for $50 million to be exact. Toronto is reportedly also interested in Hedo and should be able to offer him more financially. But the Blazers - who finished with 54 wins last season and made the playoffs - are in a better position to win right now, and while money will eventually determine the outcome of Turkoglu's destination, every player wants the chance to play for a winner.

Even though Portland is basically bidding against themselves at this point, it appears this thing is already a done deal. Just need to extend an offer, agree on an amount and draw up the contracts (well, and wait until July 8 to make if official). Everything else is for the camera.

Once Hedo is locked-up though, where then do the Blazers turn their attention?

This is a player who was a critical piece on a team that won the Eastern Conference championship. He was wanted back. He would have been paid well to come back. He was valued by his coaches and employed perfectly within the team's system to maximize his own talents. He was appreciated by fans and teammates alike and, in fact, had just gone through a long, long playoff march with those teammates. That team still has a lot of upside - and, in fact, he was part of building something special in Orlando.

But he has chosen to leave. For what? Really, I don't think you can say it's anything but money

Trevor Ariza will sign with the Houston Rockets, essentially completing the non-trade trade of Ron Artest-for-Ariza. That's one less small forward for Portland to worry about in their pursuit of Turkoglu, but it also might ramp up the competition from Toronto if they should desire.

Odds are, Turkoglu is going to be wearing a Trail Blazers jersey next season. Don't tell KP's team that yet, as for them the selling will go on until Saturday. But, this is starting to look like it's going to be just a matter of time.

Turkoglu is the best option available. As we saw in the playoffs, this team needs not only a veteran presence, but needs a third scorer. It needs someone who can create their own shot, creative mismatches, handle the ball on the perimeter, and shoot with range. Mostly though, it needs another player who makes his teammates better.
Plain and simple, Turkoglu would make Greg Oden better. He'd take pressure off Brandon Roy, and his offense would result in more quality looks for LaMarcus Aldridge.

If you're looking for some big announcement from the Blazers on this you'll have to wait a few days, even if everything works out. Any word on an agreement being reached has to come from the player's side, until July 8th.

Bumped into Hedo last night downtown PDX... he looks/feels right at home. If we get word it will have to come from Turkoglu's camp.

Michael Grange of the Globe and Mail writes...

(The floor for Turkoglu and Lee is a five-year deal starting at $10-million a season, while Ariza is hoping for something in the $8-million range as he tries to capitalize on his strong play during the NBA final.)

If they're going to get the money they want, their representatives need some competition for their services. That would explain the smoke signals that for the right money, all three would make their way north to Toronto. That in itself is a triumph of sorts, indicating that even though the Raptors struggled last season, their approach on and off the floor has gained traction across the league. They had a bad year, sure, but it's not a bad organization.

As always, drop links in the comments.