With yesterday's news from Wyn of CanisHoopus that the Timberwolves have narrowed their coaching search to 3 or 4 names, I thought it would be a good idea to catch up with Blazers Assistant Coach Monty Williams, who interviewed for the position but doesn't look to have made the cut.

Being an NBA head coach is a notoriously difficult position to break into without prior experience.  One analyst in Las Vegas joked, "General Managers see probably 32 or 33 legitimate candidates for the 30 head coaching positions at any given time."  Getting your name on that super-short list of head coaching candidates is no easy process.

But this isn't the first time Monty's name has been mentioned and it certainly won't be the last: his Spurs pedigree, his gregarious personality, his valued contributions to the Blazers staff and his exceptional abilities to relate to players and develop NBA talent combine to ensure that his name will keep coming up.  Some in the franchise have even called his future as an NBA head coach "a matter of when not if."

After last night's win over the Spurs, I asked Coach Williams for his thoughts on the interview process and Summer League observations. 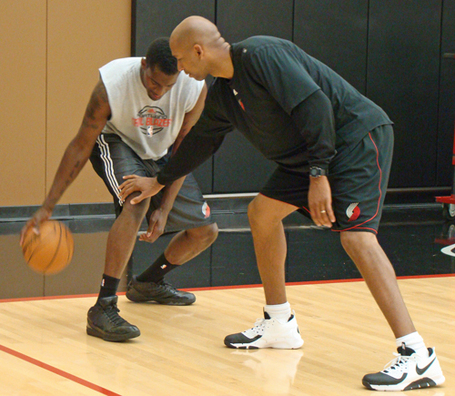 Blazersedge: Were you nervous when you interviewed for the Timberwolves position?

I mean I was obviously naturally nervous but no more nervous than I am before a game.

It's one of those things... I'm enjoying the process. There's not much to say about it because I haven't had much dialogue with them about who's going to get the job. We'll see. [Timberwolves General Manager David Kahn] is taking a bit of time to talk to a lot of people and we'll see what happens.

Blazersedge: I would imagine the Timberwolves saw you as a strong player development coach as well as someone that can really relate well to players. But what questions did they raise to you?

They're questioning my age. Being a first time head coach. That's natural. I haven't been a head coach. I am young. It's not anything I didn't think I wasn't going to hear. I knew I was going to hear those questions.

Blazersedge: So you're sitting at the table and they raise those questions. What did you say?

I can't get past that. I can't drink anything or do anything that's going to make me older.

There's going to be tons of things I haven't experienced before so I just gotta know that's going to happen.

I'm a Blazer. I'm in no rush to do anything. I'd love to get the opportunity but at the same time we'll just have to wait and see. I'm at peace either way.

Blazersedge: What advice did Nate McMillan -- himself a very young first time head coach age -- give to you?

He just told me to be myself. The same thing [Spurs Coach Gregg Popovich} told me when I came to Portland.

Tell the truth. If you're yourself, you don't have to put on masks and change . That's just not my personality anyway.

Blazersedge: What have been your impressions of the two rookies so far this week?

They have exceeded my expectations because I did not expect Jeff [Pendergraph] to be that good in the post. His post defense. I didn't expect him to have a face up jump shot.

Dante [Cunningham] is shooting the ball well but is also showing a good basketball IQ. It's exciting to see what we can do with them.

Blazersedge: With Dante, earlier this week Chad Buchanan said he's probably a 4 not a 3.  You work directly with the wings, would you agree with that assessment?

At first. He doesn't have 3 skills yet. He's not going to be able to chase 3s in the league around.

You're talking about him chasing around Nicolas and Travis. That ain't happening.

As of right now he'll be an undersized 4 but he can shoot the ball.

Blazersedge: Tonight, it seemed like Bayless got his mojo back a little bit.

He was a little more aggressive. Sometimes it takes a few games. He had a ton of expectations coming in here. He won the MVP last year. This was a good game for him to get settled in. We have one more game tomorrow, if we can see the same thing from him tomorrow it will be cool.

Blazersedge: How is Martell progressing?

Martell is jogging. [The doctors] are holding him back soon to make sure he's 100 percent. He's doing OK. I worked him out last week and he looked good.

Blazersedge: I saw that. What was the focus?

We were just trying to get him comfortable with dribbling the ball. He doesn't have to put the ball down 3 or 4 times. Being comfortable with 1 or 2 dribbles is key for him because he's going to be spreading the floor shooting 3s.  The biggest thing for him is just to have command of the ball, forget crossovers and all that.