Blazers scout Chad Buchanan was nice enough to spend the first half of Thursday afternoon's Rockets vs. Lakers game dropping knowledge to Blazersedge.  Our conversation will run in a series of four posts.

This is part three: a look at Blazers 2nd year point guard Jerryd Bayless.  In this conversation, I tried to touch more on the mental challenges and system fit issues with Bayless because, unlike the rookies, we've had a full year to watch him and have a pretty good grasp of his physical skills and game. 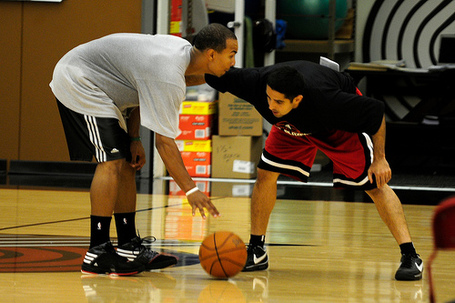 Blazersedge: Jerryd kind of struggled Wednesday night. Is he thinking too much right now?

I think that's definitely a part of it for him.

He wants to be what we want him to be.

That's hard for a guy because Jerryd's always been an attacker. He wants to go at you. He thrives on the challenge of going at guys. From a point guard, playing that position, that's good at times but when you get against good players and good coaches who prepare for you, you've got to figure out how to run a team, get the team into rhythm and into a flow, and he's still finding that balance.

I think for Jerryd this is the first time in his life that he's had to deal with not being able to do everything he wanted to do.  He's such a confident, not stubborn, but confident kid who believes he can do anything.

Blazersedge: Especially as a point guard.

Yeah. He's still finding a balance of being an attacker but also getting a flow going for our team on the floor and that's the point guard's responsibility. Unless you have a big point forward out there who can do that for you.

As a point guard, you've got to make sure your team is in some sort of rhythm. I didn't think we had that necessarily as much when he was on the floor last night. And I think Jerryd would be the first guy to tell you that.

Blazersedge: He says he doesn't but do you think he listens to the criticism too much?  He's such a polarizing figure on the radio and on the internet... do you think that gets to him?

I don't think it does. I think he thrives on a challenge.

I think he knows people question whether he's going to be a point guard. Without people telling him that, he already knows that in his game. But I don't think it impacts his mindset.

Jerryd is a very competitive kid. What people say about him doesn't really have an impact on what he's feeling. He's kind of like Jeff [Pendergraph], he wants to be a part of the team. He wants to help us win. That's important to him and he's trying really, really hard right now to be what we need him to be.

We need him to be a guy that can run our team. Whether he's coming off the bench or like last year when Blake gets hurt, he gets an opportunity to play a lot of minutes. He wants it, it just takes time. It's the hardest position to learn. Especially when your whole career you've been able to do whatever you wanted and now you can't just attack the basket every possession.

He's trying to find that balance. He's trying, man, he's trying. He has a great attitude about it. He's going to have some growing pains still but I think you're going to see some great things out of him. It may be a year or two years still until you feel like he grasps everything he needs to grasp.

Blazersedge: If there's improvement I've seen, he seems to hit the open shooter off the dribble better than he did last year but he still struggles a little bit finding a guy on the run.

Yeah. I think one thing he needs to improve on -- he can go get into the lane whenever he wants, it's finding that balance of getting in the lane, it's not always about seeing the rim, it's about kicking it to Martell or kicking it to Blake or Rudy or whoeover for an open shot. Seeing everything around you rather than just seeing what's right in front of you. Guys that can get into the lane in our league -- that's a big time skill and Jerryd's got it.

It's getting better. That's a hard thing for a guy to change. It's like a habit. Changing a habit is something that's got to be done over and over and over. I think we're seeing progress a little bit at a time with that. I can say this: nobody wants it more than he does. I know we as our staff, Nate and the coaches, fans want it now.  I guarantee you nobody wants it more now than Jerryd Bayless.

Blazersedge: Two years ago coming into camp it was Jarrett Jack versus Steve Blake for that point guard spot. Jack took it and then gave it back.  Do you think this year it's going to be like that or is Blake still enough of a cut above where Jerryd is entering camp with the idea that he's just looking to increase his minutes in a backup role?

I think Jerryd's mentality is he wants to come in and play. I don't think whether he starts or comes off the bench or whatever, I don't think that's really important to him. He just wants to play. Steve is such a steady influence on the floor and we've got a comfort level with him, he has a comfort level with Nate and our coaches, he plays well off of Brandon.  Jerryd for us his value would be coming off the bench and being a spark for us.  Steve and him are such different point guards, different players. For Jerryd it's a matter of finding which lineup meshes well to maximize his talents -- Nate and our coaching staff are trying to figure that out.

We look to find guys that can play with Brandon because that's what's going to help us win the most games. Because late in games he has the ball in his hands a lot and finding the guys that can play off him is really valuable for us. That will be something long-term that Jerryd is going to have to figure out at some point.