Blazers scout Chad Buchanan was nice enough to spend the first half of this afternoon's Rockets vs. Lakers game dropping knowledge to Blazersedge.  Mr. Buchanan broke down Dante Cunningham, Jeff Pendergraph and Jerryd Bayless in detail and then gave his thoughts on who impressed him the most from this year's Las Vegas Summer League.

Our conversation will run in a series of four posts.

Here's part one: a full scouting breakdown of Blazers rookie Dante Cunningham. It was awesome to see Mr. Buchanan confirm some of my observations about Dante and humbling to hear him add layers to our understanding of the Blazers' promising second round draft pick. 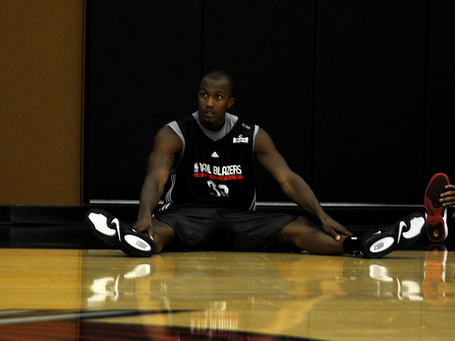 Blazersedge: Last night Dante showed more with his dribble than he did in the first game. Is that a part of his game that was surprising to you?

I think his strength right now offensively is his face up shooting. He did a couple of things off the dribble yesterday. He had a great baseline move he didn't finish late in the game.

He's always been a niche guy at Villanova where they told him exactly what they wanted from him and he did exactly that. He never really got out of his comfort zone. Putting the ball on the deck was not really something they asked him to do a lot. It's something he has in his game that he's going to have to add because teams will figure out that he can shoot it. They will get up and crowd him a little bit and he's going to have to do something off the dribble.

And I think he will because he will do whatever you ask him to do. He's very coachable. He's had great coaching with Jay Wright with 4 years at Villanova. Played against great teams and great coaches. He's smart enough to figure out what he's going to need to do.

His strength is going to be shooting the ball offensively. He's going to get you some extra possessions going after boards.

I think putting it on the deck isn't necessarily a strength to his game right now. He did a little last night.

Blazersedge: Do you think he's the kind of guy you might use in pick and rolls more or is he going to be a weakside shooter that teams leave and he hits the open shot?

I think he's going to be a pick and pop guy. He's a good screen setter. He understands angles on setting screens for his ballhandler. He knows how to get away from the play to give them open room for a shot. That's his bread and butter. 17 to 18 foot jumpers. That's what ball screens are going to get for a guy like that.

We tell our point guards to trust him as a shooter. I think you'll see him doing a lot of pick and pop.

[He's different than] Travis, who is a guy that's good off the ball. I'm not sure he's that kind of guy.

He needs to go hit somebody before he get his shot. That's just his nature. He has a really good feel for the game. Understands where to get his shots. Has a couple of sweet spots on the floor, the elbow area and the baseline is where he really feels comfortable shooting the ball.

Blazersedge: I was impressed with his confidence shooting the ball right out of the gate in game 1. No nerves at all.

He's never going to turn down open shots. He knows that offensively that's how he can impact the game. So if he gets a clean look he's going to take it. You saw last night he's not shy. If he's got a look he's going to shoot it. That's what you want from him. He's a guy who can string a bunch of shots together.

A rookie is often really fragile with their psyche with the ball. They miss a couple of shots and you can see their confidence drop and that's where with Dante you want to see him not think about it. If you've got a clean look shoot it. If you miss four in a row, shoot the fifth one. You've got to have that mindset. It's hard for a young player to keep.

Here at Summer League it's one thing but when you get to our league continuing to pull the trigger can be hard for some guys. Hopefully he'll have the confidence level to shoot the ball because he can make shots at our level.  If you put him with guards that can get him shots, he will hit shots.

Blazersedge: He's kind of stuck in the 3/4 tweener. Who do you think gives him more trouble: 3s or 4s?

He'll have more difficulty right now with 3s. I think his quickness is decent and he's smart enough and good enough to take away one thing [from a quality small forward]. But if you put him on a guy like Kevin Durant or Carmelo, guys that can go both inside and outside, that's where he might struggle. He doesn't have great length. Kevin Durant might be able to shoot it over him. He's going to have to try to use his body to get up into those guys.

He's versatile enough that once he figures things out he'll be able to guard both positions.

Big, physical 4s he might have trouble with but he's very strong. His legs, his hands, his core. Yesterday, he took the ball in and went up in the air and Dorsey came and hit him in the air and he didn't even move in the air.  He has a core strength.

His strength right now is his ability to guard a couple different spots. He plays every play until the play is finished. He doesn't give up on rebounds or loose balls. Playing at Villanova that's how they are. They build this junkyard dog mentality with all their guys. Jay Wright is a big time coach. He gets college guys to play that way and that's how Dante plays.

Blazersedge: Where would you rank his nose for the ball on the offensive glass compared to the rest of the guys on the Blazers roster right now?

Towards the higher end. His IQ -- it's a great way to evaluate guy, "how does he read the ball off the glass?" Dante may not get a bunch of offensive rebounds but he will get his hands on balls, he will tip it to an area where he can go get it or his team can go get it. That's where he will give you extra possessions. He will force you to box him out every time. For a lot of guys guarding him, that's a pain in the ***. He will crash the boards from the 15 to 17 foot area and see the ball in the air. With his quickness, that's a really hard guy to box out. He knows that. He played in that area at Villanova and he's used to attacking the glass.

We don't have a guy like that necessarily on our team that's an away from the basket offensive rebounder. Joel is good at getting position, holding it and getting his hand on the ball. LaMarcus is a more physically talented rebounder with his length and ability to get off the floor but I think Dante's basketball IQ for rebounding is right up there with the rest of the guys on our team. Towards the top or at the top.

Blazersedge: He was kind of coming in looking at being right around the 12th man. Is he still in that same slot?

Yeah. As it is now, Travis is playing a lot of your back up 4, some of your back up 3.  Dante's going to have to come in and learn Nate's system. He's going to have to gain the respect of our guys on the team, gain the trust of them. It's going to be hard for anybody to do that -- to come in and get minutes on our team. He's just go to be ready to go because it's part of an NBA season -- guys get hurt, maybe a guy isn't playing well and he gets an opportunity. He's just got to be ready for that. The roster as it is today it's going to be tough for him to come in and get a lot of minutes. There might be some situations where Travis plays a straight 3 and Dante or Jeff comes in and plays some four.  But then with Martell coming back there's really not a lot of minutes unless someone gets hurt or there's a trade.