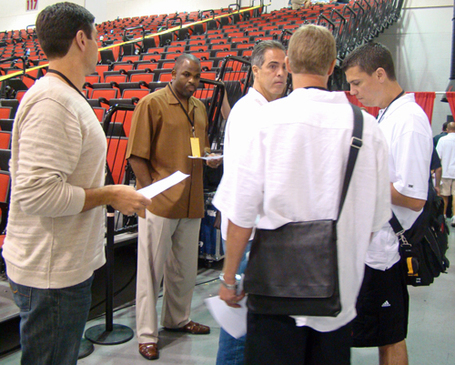 The positive story for the Blazers tonight was the continued emergence of Dante Cunningham, which Joe Freeman sums up nicely...

Cunningham showed even more than that tonight.  Most impressive was the quickness and decisiveness with which he moved with the ball in his hands, showing the abilities to go left and right off the dribble and to use his body to create contact and space for around-the-basket finishes.  Although Houston's frontline of Budinger/Leunen/Dorsey isn't exactly the 09-10 Orlando Magic, Cunningham continually dropped jaws with a repertoire more advanced than expected: jump hook, power dribble left, turn, face and pop, and more. He shot it very, very confidently and didn't get down on himself over misses.  Summer League Coach Joe Prunty agreed, "I think he's showing us more and more what he's got to his game. That familiarity is going to help improve his chances at an NBA career." More than one casual courtside observer took it a step further than that as whispers could be heard during the second half, "Well... I guess they can trade Travis now..."

(Sidenote: not sure if this came through on television or not, but Cunningham was riding a bike for stretches of the first quarter and was wearing a very large bandage around his left thigh.  After the game, he inserted a humongous ice pack into his shorts and was walking gingerly.  Cunningham said both the ice and bandage were simply precautionary and he's good to go.) 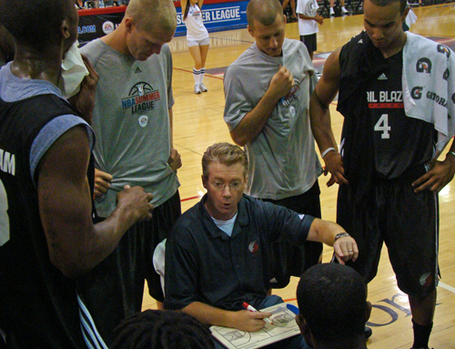 The true entertainment from tonight's game came in the second half when Coach Prunty finally broke out of his shell after the 354th terrible call and began passive-aggressively berating one of the officials.  As a whistle stopped play, Prunty turned to the official and began asking simple questions, such as, "Do you know what that call was?  Do you know where we'll inbound the ball?" Hecklers in the behind-the-bench audience chimed in, "Do you know your mother's middle name?  What time is it?" before Prunty finished, "We need to know this stuff. If you could communicate it to us, that would be great." Coach Prunty, I didn't know you were built like that. Awesome.

The frustration for Prunty in dropping his second game in a row was evident after the game and he heaped some blame upon himself for late-game miscommunication coming out of timeouts that led to an errant inbounds alley-oop play and a confused Pendergraph away-screen that never developed.  Prunty was kind of kicking himself over these details, as coaches do, but -- repeat after me -- It's Only Summer League.

I take it back, the truest entertainment tonight came from sitting courtside next to a group of 2009 rookies that included Minnesota's Jonny Flynn and other first round picks.  As Jermaine Taylor leaked out on a fast break with Dante Cunningham in pursuit, one of the rookies yelled out, "SOMEONE'S ABOUT TO GET BANGED ON!!!!" Sure enough, Cunningham's trailing block attempt did nothing to stop Taylor from posterizing him and the group broke up in hyena hysterics, shoving each other back and forth in disbelief and shouting, "YOU CALLED IT!!! HE SAID SOMEONE WAS GOING TO GET BANGED ON AND IT HAPPENED!"

Only at Summer League.

Moments later, Oleksiy Pecherov stopped by and invited Flynn to attend the Wizards game in the arena next door, as Pecherov was interested in seeing his old teammates play.  Flynn declined politely, opting instead to watch his friend Jerryd Bayless.  Flynn also charmed longtime Blazermaniac Georgia Miller with his 100 watt smile and signed autographs for hordes of kids. The takeaway from this rambling: David Kahn h as his charismatic point guard of the future.

As for Jeff Pendergraph, his night was highlighted by a few nice jumpers but marred by a number of fouls (8 to be exact) and an ongoing pushing and shoving match with Houston's Joey Dorsey.  Asked about the physicality of that confrontation after the game, the ever-quotable Pendergraph smiled and said, "I stayed getting into it. I thought me and him were about to fight. Bumping, pushing, shoving, talking crazy to each other, not giving each other an inch of space. He wasn't backing down from me and I wasn't backing down from him. It just kept going and going and building and building. Watching the game I know you can tell something was going down." Asked to describe what precipitated Dorsey's technical, Pendergraph mock-demonstrated the action and joked, "He just elbowed me in my face. It's supposed to be a foul. The whole playoffs I seen people get elbowed in the face and they blowing whistles." True that, Graph.

Not to get all super analytical over Summer League for no reason, but there's no question this team would be significantly better with Pendergraph at 4, Cunningham at 3, Jones at 2, Bayless at 1 and the ghost of Steven Hill manning the middle.  Shifting the two rookies up a spot led to significant foul trouble tonight (16 combined fouls between Pendergraph and Cunningham) and a negative rebounding differential for the Blazers.  For his part, Pendergraph shrugged off any discomfort playing the 5 saying, "I'm fine with it. I played it dang near my whole life. It ain't nothin'." Sure, it's nothin' monumental but it's sticking in my craw. 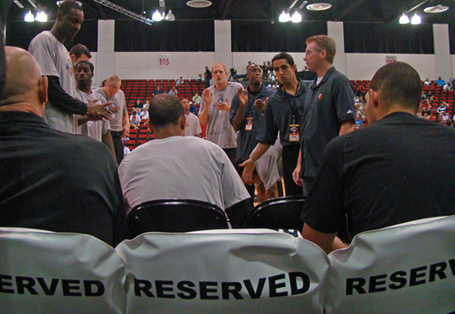 Last but not least we saw a forgettable 13 points, 6 rebounds, 2 assists, 6 turnovers performance from Jerryd Bayless. There was a lot to dislike: an early, careless slap foul on defense, an overly deferential attitude in running the offense, some contested shots blocked, etc.  Bayless said after the game that he wasn't concerned about his numbers and that "I thought I did what I needed to do. Pooh and Dante had it going tonight... I'm trying to use the tools to get ready for next year" and mentioned the role he's learning in setting up his teammates and how that will apply to playing more with Brandon and LaMarcus next year.

Nevertheless, if you're stuck on doubting Bayless's ability to be a point guard, tonight gave you some ammunition.

On the bright side, at least we know he worked out with Greg Oden.

A scheduling note: The Blazers have cancelled practice tomorrow and will next play Friday night. I'll be at the other Summer League games tomorrow.  Follow along on Twitter during the day and I'll have a recap at night.

Click through for a picture of an instant Summer League legend and half of an awesome tattoo. 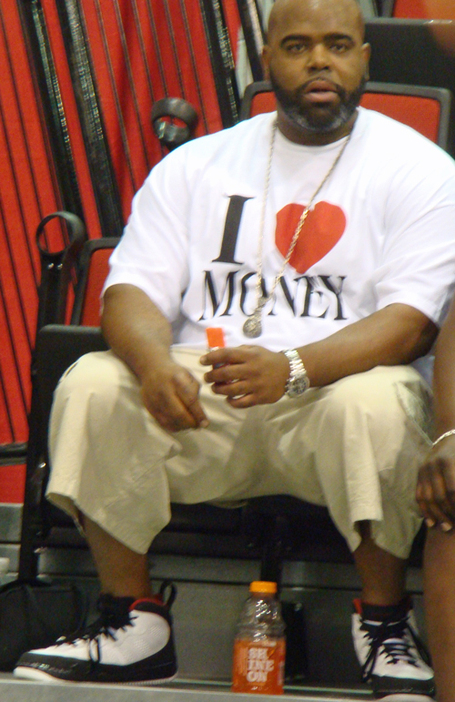 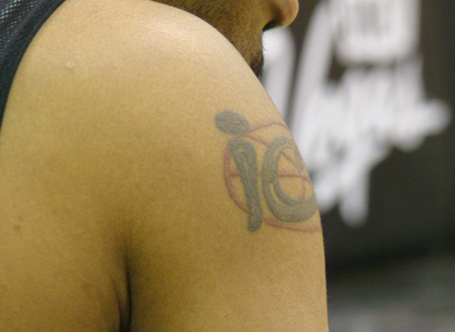 You Portland AAU freaks will recognize this tattoo despite the poor angle: Thomas Gardner has the logo for Inner City Players (ICP) AAU team tattooed on his right shoulder.