Share All sharing options for: Patty Mills Broke His Foot 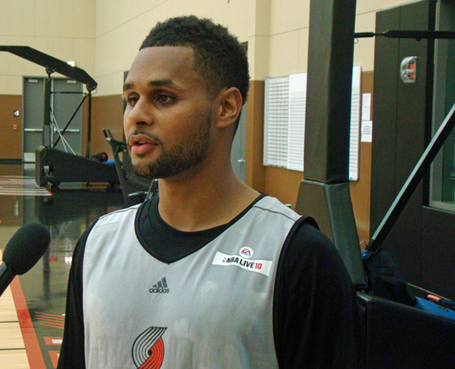 According to Art Garcia of NBA.com, Blazers rookie Patty Mills -- selected with the #55 pick in the second round of this year's draft -- will miss the 2009 NBA Summer League after breaking his foot in last night's evening session that was not open to the media.

Blazers second-round pick Patty Mills suffered a broken right foot in practice Thursday, knocking the point guard out of the NBA Summer League. The injury occurred at the team's practice facility in Portland, as the Blazers were preparing their squad before heading to Las Vegas.

The Blazers' medical staff is evaluating treatment options for Mills. The early feeling is the rookie should be ready for training camp in October.

Thursday was the first day of practice and Mills was hurt in the second of two sessions.

Mills is seen as an athletic, scoring point guard with superior ball-handling skills.  In yesterday morning's practice he shot the ball confidently.  Mills had been slated to both backup Jerryd Bayless at the point guard position and be used off the ball during Summer League. Mills is just 20 years old and was the second youngest member of Portland's Summer League team.

Mills was already questionable to make the 2009-2010 Blazers roster. Kevin Pritchard noted on draft night that Mills' Australian passport could allow him to more easily spend some development time overseas.  The Blazers' roster currently only has two point guards -- Steve Blake and Jerryd Bayless -- and some believed a strong Summer League showing would go a long way to help Mills' chances of sticking with the team immediately.

According to Draft Express, Mills suffered an injured wrist in January that kept him out of much of this year's college season and likely contributed to his draft day slide.

Much more to come on this story this afternoon.

All the best go out to my boy patty mills.

10:20AM: The Blazers have issued the following Press Release confirming the injury.

X-rays taken Thursday night revealed the fracture. Mills will see a specialist today, at which point a timetable for his return will be determined.

"You never want to see a player get injured, but it is especially heart wrenching to see a young man go down on his first day of camp," said General Manager Kevin Pritchard. "We'll do everything we can to help Patty get back on track to realize his NBA future."

Mills, 20, was selected by Portland with the 55th overall pick in the second round of the 2009 NBA Draft after playing two seasons at St. Mary's (CA) College.