Paul Allen aka the HBIC (Head Billionaire In Charge) was at the Blazers Practice Facility today checking in on the player workouts. 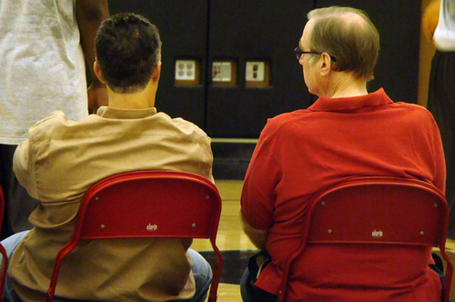 To watch and read some of Mr. Allen's thoughts from today, click here and here.  For the full scoop on each player from Blazers scout Chad Buchanan (with pictures), check out Casey's post.
Because Buchanan said Eldridge and Lowhorn were almost assuredly headed back to school, James was on the bubble but likely to head back to school and Shipp is likely to go undrafted, I won't spend too much time discussing those 4.
The other two, however, are worth some chatter. But, first...
Joel Freeland
As you might have read, it appears Joel Freeland is close to signing a contract with the Spanish team Unicaja.  Word from one Blazer employee was that the situation is still "day-to-day" and "multiple teams are after him."  It didn't sound particularly likely that Freeland would be coming to the NBA in the near future.
Now on with the workouts...

The story at the pre-draft workouts today was the talented pair of blue-chip North Carolina guards, Wayne Ellington and Danny Green, who represented 50% of the Tar Heels expected to be taken in the draft this year.  We can only hope Ellington and Green speak highly of their workouts here in Portland so as to convince the other two draft-eligible Tar Heels -- point guard Ty Lawson and Power Forward Tyler Hansbrough -- to make the trip out.  Positionally, Lawson and Hansbrough make more sense for this Blazers roster than Ellington and Green but we shouldn't discount what these two bring to the table.

Ellington, in particular, stood out because of his size (seemed bigger than his list weight of 200 pounds), his jumper (absolutely beautiful form, which should come as no surprise) and moxie (he carries himself like a professional already).

Generally regarded as a late-first/early-second round pick, I asked Ellington if he had made any bets with his fellow Tar Heels regarding who would be drafted first.  He said that he hadn't so I asked him, if he were a GM, which Tar Heel he would draft first.  He smiled and without pausing said "Me, man" and started laughing.  It wasn't the answer I've come to expect in that situation but I loved the honesty and confidence.  "Well, in that case, would you take yourself number one overall?"  I asked, testing his braggadocio a little bit. He laughed and said, "Nah... Blake's got that, Blake, man, he's a monster."

"But you're number two after Blake, then?

Honestly, I'd draft Ellington based on that 20 second exchange alone.  That's why I'm not in charge.  But at least one observer mentioned that he thought Mr. Allen seemed to be looking extensively in Ellington's direction.  Buchanan called Ellington "polished"  and that's surely accurate.  He has a prettier stroke than any current Blazer, Martell included.

I guess the questions with Ellington are defense (Buchanan noted that Green was a better defender) and his height (although he measured 6.5.25" in Chicago, which seems sufficient).  In addition to his sense of humor, easy-going nature, and confidence, Ellington boasts a national reputation (McDonald's All American) and winning pedigree (National Champ at Carolina).  Honestly, I'm not sure what's keeping him out of the first round on some draft boards.  Seems like he will be a solid pro for years to come. 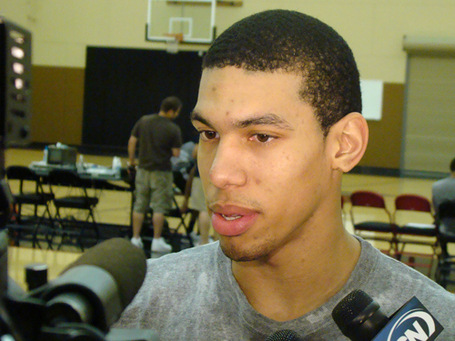 Green was shorter and much younger-looking than I was expecting. Gerald Green is his cousin and although Danny isn't the same kind of explosive leaper that Gerald is, he can still get up; Danny threw down some thunderous dunks during an alleyoop practice session.  The form on his jumper was nice but looked worse than it actually is when viewed side by side with Ellington's.

Danny described himself as a "humble guy" who is proud of what he's accomplished at Carolina ("winning the title still hasn't hit me") and, although he came across as a little shy in front of the cameras, he seemed to have a much better head on his shoulder than Gerald.   He was honest enough to admit to not knowing Paul Allen was in attendance (in fact, it seemed like he didn't know who Paul Allen is, period) and said that he was purely focused on the coach's instructions during the workout.  His mindset right now is to show "how competitive you are and how tough you are."  From a culture perspective, Green definitely seems like a fit; indeed, he said he knew Martell ("a really funny dude") and Greg from playing against them in AAU.

If he improves his jumper and fills out his physique he should be able to stick as a pro.  I see no red flags preventing the Blazers from taking a look at him in the second round but he's probably a better fit on a team that lacks depth on the perimeter.

FYI, the next set of workouts are scheduled for this Sunday.

Be sure to click through for KIX PIX (man, it feels good to say that! ) 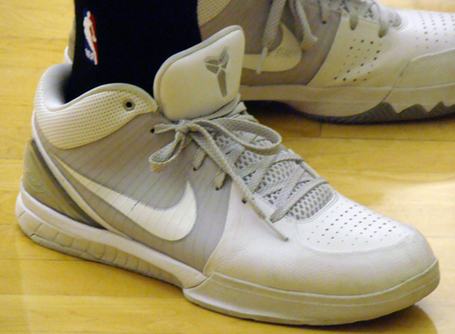 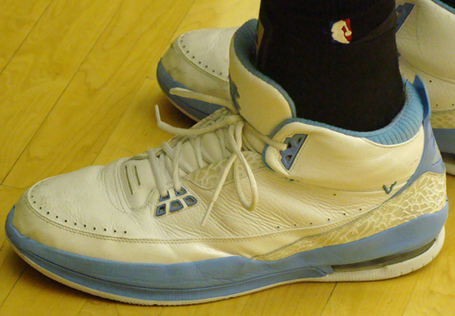