All the heavy hitters were in the building today -- Kevin Pritchard, Tom Penn, Nate McMillan, Chad Buchanan, Monty Williams and Dean Demopoulos -- and they were accompanied courtside by a sympathetic figure: the be-slinged Steve Blake. Whether the Blazers planned to pick up Blake's team option (and Travis Outlaw's for that matter) was never in question, but for those of you who needed clarification from KP, Blake's presence at the Practice Facility today was yet another sign that he's still very much in the mix. 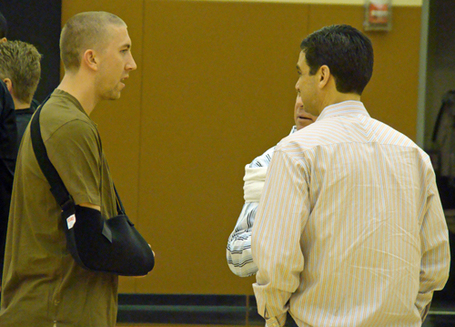 Asked about Blake's health, Coach Nate said "he seems to be doing pretty good, he looks good, the surgery went well. He could have gone through the summer without the surgery and allowed that to get a little stronger but he wanted to make sure he took care of whatever he needed to do early to be ready for the season."

Before I look at a few of the guys that worked out today, Kevin Pritchard addressed the media, fielding questions about his mindset right now and where he's at in the offseason process.  The last I saw KP after the team's exit interviews, he was saying he was ready to detach and get away from it briefly.  To borrow a phrase from Dipset, well, ya boy is back at it.  Not that he was going to give us any specifics but he did seem eager to let everyone know, "We're willing trading partners. We're willing to move up, move down, move out... It's never been dull and I can't imagine it will be dull this year."

Asked if this summer takes on added importance as the team looks to get over the hump, KP disagreed slightly. "I thought a couple of summers ago was just as important, if not the most important. Now we need to find guys that make sense for us, that fit us.  We have a culture that we believe in and so players have to fit into that first of all. We have Brandon, LaMarcus, Greg, Joel, Blake, guys have to fit into what we do. Whether it be a free agent, trade or the draft."
There KP goes again, including Blake's name in the core group of guys.  Not the first time recently. And definitely not a slip of the tongue this time.  Blake fans can sleep easier tonight.
For more KP, Casey has quotes on each prospect.

Chris Johnson... where have we heard that name before?  Oh, right, he was invited to the Blazers' last set of pre-draft workouts.  He's the player I described as "needing to add 60 pounds of weight/mass."

The scouts must have seen something at that time because they brought him back for another look.  I asked Nate, who was downright jolly to be back in the gym, for his assessment of Johnson and he shut me down Bayless Face style: "He's a good player... I thought they all did a good job."  Well, gee, thanks.

"Great length. Can block some shots. He gets off the floor quick, both on his first and second jump. He will have to become a better rebounder. He needs to gain some weight, get stronger. But he's got a chance."

The guy is all arms and legs, very tall and very thin. He was wearing pads around his calves, probably to help keep them from appearing invisible when photographed.  He has an athlete's presence in terms of his on-court mannerisms and reaction time but a guy like Greg Oden would eat him for brunch. Not even breakfast. More like a post-breakfast snack. A yogurt if you will.

Because of Johnson's invite back to the gym, there was some whispering today that he might be someone the Blazers would target with 1 of their 4 second round picks.  I asked Nate whether Johnson's length and bounce might make him worth the risk.  Nate said, "We can do a lot of things with those picks, as far as moving them to get an earlier pick, taking some guys that you want to take a chance on who have some potential. We'll probably have some roster positions to develop another guy or put a guy there that we can wait on."

Even if he goes undrafted, Johnson seems like a natural fit in the NBDL next season.  The obvious concern with him is that he runs 6'11" and 190 pounds after four years of college at the age of 23.

If he hasn't put on the weight yet, will he ever? 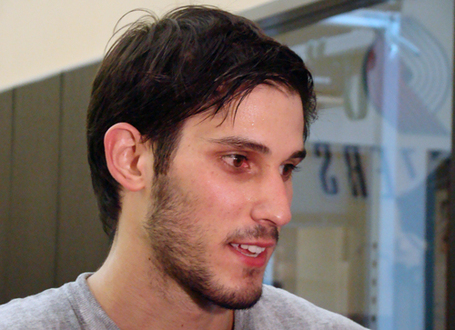 We really only got to see the guys shoot jumpers today so speaking meaningfully about their games is difficult.  The class of today's workout session based on reputation would seem to be Casspi, who's aiming to be the first Israeli in the NBA.  Casspi was smart to mention that he has been playing professionally for four years already and seems dead set on entering the NBA this year. Any idea of a draft-and-stash is probably not in the cards.

That said, you can tell immediately that he has an NBA body with NBA grace to go with it.  He moves like a player and it's easy to imagine him out running (maybe even leading) a fast break.  His slight build necessitates a face-up game and he probably slots in as a 3 in the NBA.  I think the comparison he will get is a shorter Galinari but without seeing him in live-action that's pretty difficult to draw.  In fact, Nate refused to agree with that comparison when I prompted him.  But judging from these comments from KP I think the team was impressed...

"He played well, had a good workout, shot the ball better than we expected, a tough, competitive kid, when he's out there he seems to raise the level of play. He's going to be an NBA player.

Do you think he's a first rounder?

"I do. I do. But who knows what happens in the draft. Who stays in, who pulls out, but he has first round talent."

The one big question mark that I was able to see with Casspi is his shooting form.  It's hard to describe without offending someone (i.e. "like a drunk middle school girl heaving a bowling ball") but I'll do my best.

Casspi picks up his dribble and sets the ball slightly right of center on his body, pulling it back into his shooting pocket roughly even with his breasts, with the back of his hands nearly touching his chest.  He then brings the ball up much like you would throw a yo-yo, out in front of his body with his hands trailing behind, flicking the ball out -- with maximum backspin the (intended) result.  His ball seems to rotate 25% faster than the average shot while travelling in the air and it rotates precisely over the seams so i imagine he gets a lot of friendly bounces. The most amazing thing about his form is that, while so unorthodox, it's almost entirely consistent. In other words, he shoots completely "wrong" from a textbook perspective but he shoots it the same "wrong" every single time.  The result during the open shooting drills today was an impressive display: swish after swish after swish. His career shooting percentages are also impressive on paper.

The question I had, which I can't answer without seeing him play, is: how will this work out against athletic NBA defenders?  I put this question to Nate, who agreed that Casspi's shooting motion was unconventional and had the following to say...

You wonder if he can get that off in the league. But he did in the workout.

It's a perfect shot to get the defense to commit. He's able to put the ball on the floor. It's low and it's out in front of him.

With that pump fake and being able to handle the ball, put the ball on the floor, it helps [make up for the low release]. It is a little bit unorthodox but he has done it for awhile and he's pretty comfortable with it.

Nate's got a good point: Casspi's shot motion is so strange that athletic wings will lick their chops when they see him catch a swing pass and slowly go about putting the ball into his shooting pocket, thinking it will be stuff city when he finally gets the ball out of his hands.  So as a player who can stretch the defense, he's probably ready to go in the short term.  As a player who will be able to create a shot one-on-one and actually execute his slow-developing, low-release shot off the dribble, it might be awhile.

In any case, he's a very interesting prospect and reminds me a little bit of Rudy.  Not just for the scruffy facial hair.  It's clear that he's carrying the expectations of a nation on his back and he seemed quite comfortable doing so.  He was a natural in front of the camera and was smart enough to come prepared to answer questions about the Blazers.  He stated that he thinks the Blazers have a winning tradition and that he wants to player for a winner right away.  From a "culture" perspective, he seemed an ideal fit.

The questions with Casspi are: where does he fit on this roster and will he succeed in a slow-tempo offense? He seems like a better fit in an up-tempo, open court game.

Another good question: will he even be available at 24?  I wouldn't be surprised if he was off the board before Portland made a pick, unless they move up.

Although I'm not sure his ceiling is super high Casspi will be a fun player to watch progress in the NBA.

I wish I had more for you on the rest of these guys, particularly Greivis Vasquez, but the players beat it to the locker room pretty quickly after workouts and the management and coaches were relatively tight-lipped today.  But here is some video coverage and more coverage from Kings.com, who worked out Casspi and Vazquez yesterday.

And, last but certainly not least, here's a nice look at the scouting process from Mike Barrett.

The Blazers will work more players out on Tuesday. Details about who will be there will be available Monday.