BE Exclusive: Interview with Nate McMillan

Share All sharing options for: BE Exclusive: Interview with Nate McMillan

Here's a Blazersedge exclusive Question and Answer with Nate McMillan. I talked with Nate after his post-draft general statements. We discuss plans for the team's draft picks, a few of the quirkier things that unfolded during the draft, his Summer League plans for Jerryd Bayless and, of course, what the heck happened with DeJuan Blair. 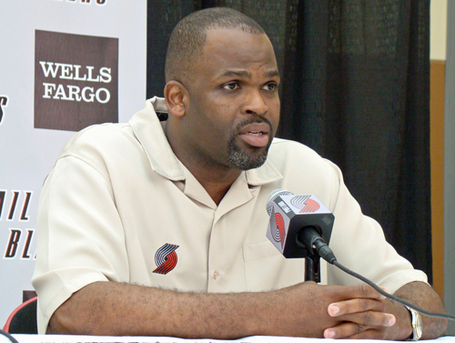 Blazersedge: Nate, Kevin said a minute ago that during the draft process you and Tom Penn are the guys telling him to sit on his hands and holding him back from making moves.  Was there a moment tonight where you had to do that?

Right now with Sergio not being there we have 5 spots.  Now we add 2 with Pendergraph and Cunningham so that's 12.  We've got 3 open spots still. We could have drafted and bought some more picks and added [a total of] 5 guys.

[By not doing acquiring additional picks] you just leave yourself some room if there's something out there in free agency.

Pretty much what they do is have a formula and what he has to figure out first is the cap number.  We will have some guys that we will target.

I'm on the same team with Kevin.

He'll get ready for that.  He knows, we've talked about what we need to do to improve this team.  So we're on the same page.

Blazersedge: Previously you've told me you envision turning the Summer League over to Jerryd Bayless exclusively.  You just drafted a point guard in Patty Mills. Does that create a conflict or change of plans for Summer Leaglue?

No. The plan is to play Bayless at the one. There will be some times where Coach Prunty will play Mills and Bayless at the same time but I want Bayless playing one a majority of summer league.

Mills, for right now, will back him up. I'm sure they will be on the court some together.  Possibly move Mills off the ball.

Blazersedge: Kevin said he expects all three second round picks to play in Las Vegas. Do you have that same sense?

Yeah, I think that's something we will work on. You get into contract issues and all of that but yeah we would hope they're ready to go.

Blazersedge: Yeah, I was going to say you don't look super happy. You look exhausted.

I guess with what we've done over the last few years, having lottery picks, having number one picks, it's just been so much excitement that the expectations are way up here.

[Drafting like this] is a sign we've gotten better. We've improved. Hopefully we continue to draft like this and not be in that lottery again. That's the plan. It's a good sign but you wouldn't know it [given the mood in here]. [laughs]

Blazersedge: Were you surprised to see Minnesota go point guard, point guard at picks 5 and 6?

Yeah, I think a lot of people were. I still feel like there's another move there.

Well, I don't know which guard but you've got Rubio, you've got Flynn and then you've got Telfair so you've got 3 small guards. Flynn can't play off the ball.

I just think that there's probably another move somewhere because those are two guards that a lot of teams wanted. You can use those guys somewhere during the summer to get a piece or player.

Blazersedge: DeJuan Blair was a guy that many thought you guys had interest in.  You had 3 cracks at him and passed on him 3 times. Were you surprised by how far he fell (to San Antonio at #37) and was there anything that kept you away from him?

We were a bit surprised but we just felt like the guys we had targeted were there. Those were the guys that we wanted to go with.

Blazersedge: So you had both Jeff Pendergraph and Dante Cunningham above Blair on your board going into Thursday night?

We didn't have Blair on our board.

We thought he would be gone.

We didn't know where Blair would go but the guys we targeted we got.