Share All sharing options for: Draft Prospect Board (Final Version)

This board does not attempt to predict who the Blazers will select, who will be the best professional or who is the best player today.  This board aims to answer the question "Who would I be least surprised to see drafted by the Blazers this year, regardless of pick?"  This board only ranks players that have worked out in Portland.

Ty Lawson -- For the full rundown on Ty, read The Ty Lawson Report. Yesterday's trade with the Mavericks may make it slightly easier for Kevin Pritchard to maneuver within range to grab Lawson, depending on how the late lottery picks shake out and who's looking to trade down. 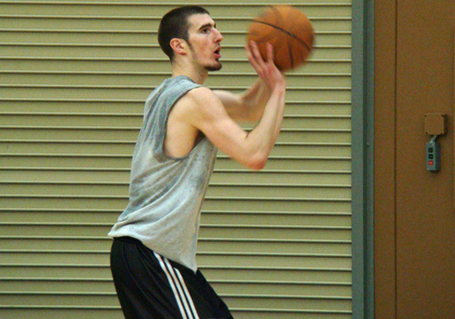 Nando De Colo -- Nando was said to have had a good workout in Portland but was not able to keep up with Lawson when they were matched up together.  In that group of five players, though, he was considered the #2 target above Paul Delaney, Taylor Griffin and Goran Suton (as should be expected).  Nando just turned 22 and is drawing interest because of his superior height (6'5") and ability to score the rock. He's also had 3 full seasons of experience in the French A league.

His shot looked solid if not perfectly smooth during the open media session and he seemed to fit right in with his American counterparts: there were a number of small exchanges between De Colo, Lawson and Delaney. That doesn't say a whole lot but is evidence that he's probably mentally ready for the transition to the NBA.  Some of the international prospects have been noticeably more tentative and aloof than De Colo.

"Creative kind of combo guard. Played a lot off the ball with Cholet over in France. Was a teammate of Rodrigue Beaubois. Saw him over in the Eurocamp, Mike, Jason and I did and Coach Bayno. Very creative. He's got some flair to his game. He's got good size. Probably going to have to be a point at our level. He needs to get stronger, but he's got a really good feel for the game and can make some plays for other people around him, which is appealing, especially for a guy his size.

Does he have to come over this year or can he be stashed?

"I think he gets drafted. I don't know, depending on what you want from him, if you feel like he's ready or not. I would say physically he's probably not quite ready, but basketball feel, IQ, skill level, he's probably pretty close. It's just going to depend on what you want from him. If you've got a spot for him maybe you consider bringing him over. But most teams would probably leave him overseas, if I had to guess."

De Colo finds himself relatively high on this board because he's a mid-to-late second round target that can be held in Europe. He's kind of slight in frame and I'm not sure how much he will fill out. That could end up preventing him from really shining in the NBA.  Despite being much taller than Lawson, I'm not sure how successfully De Colo could match up with a taller, buillish guards like Tyreke Evans, especially given questions about his lateral foot speed.

All of that said, and all things being considered, De Colo is a solid NBA prospect.  If the Blazers continue to move their second round picks, however, the likelihood that he gets drafted to Portland decreases exponentially.

DeMarre Carroll -- I flipped Carroll back over Dante Cunningham because it seems like questions about his health have been put to bed.  Really, the pack of 3/4s clustered between 20 and 40 are very hard to get a read on.  Carroll's stock has risen a bit and that actually could make him less likely to be a target for the Blazers as he might not be available early in the second round. I don't think it's particularly likely he ends up here.

Omri Casspi -- Casspi's name has been creating a lot of buzz behind the scenes over the last 24 hours. Sources believe he was the main impetus for the Blazers moving up to the #22 spot because Sacramento has significant interest in him at #23.  He projects really well statistically in Hollinger's Euro Rater and Kevin Pelton's EuroLeague Translations. The comparison names Pelton came up with were: Tim Thomas, Dirk Nowitski, Marvin Williams, Rudy Gay and Joe Johnson.  Not a bad group at all. Casspi's attitude has been praised so you've got to think Tim Thomas with a better attitude is pretty good if you're drafting late in this draft, especially considering Casspi just turned 21 this week.  I've heard the Nets, Bulls, and Spurs also have some level of interest in Casspi. I'm getting conflicting reports of the Blazers' own interest in Casspi as some believe they would pick him at #22 to use in a trade.  Of course it's no guarantee that the Blazers stay at #22.