Kind of a ho-hum day out at the Practice Facility today.  Let's get right to it.

But, first, be sure to check out tomorrow's workout list.

KP addressed the media briefly before returning to his office to work the phones. Here's the Q and A.  Questions are paraphrased. KP's answers are transcribed.

Are things starting to heat up as we get closer to the draft?

Deals are starting to pop up now. What you've got to decide is, "Do they make sense for you or do you make other deals?"  You're going down the line with what you want to get done. We've always had this philosophy: figure out who you want and do everything you can to get them. If we can do that, we'll do that. We're not limited in our options. We've got a lot of options. We'll be active as we need to.

Is moving up a possibility?

It's always tough to get into the lottery. Every year those are the coveted picks. Not so much the picks, it's the coveted players that are out there. It changes year to year. It takes a lot to get up there. We chose at the trade deadline not to do anything because we liked our core team and we felt like it was the right thing to do. And we're ok doing that this year as well. I don't want to limit our scope and I'm not saying we're going to do anything.

I struggle sitting on my hands. That's why I have an upper management group that makes me sit on my hands sometimes. We're aggressive, we're always going to be aggressive.

[Editor's Note... if that first sentence is not the perfect BE signature line, I don't know what is]

Is there a single deal on the table right now you could pull the trigger on?

No. No, we've got options. There's all kinds of options but we don't sit and say that's the only one. We try to go out and look at other ones and compare them to one we have already. We have options and we have to take a look at all of them.

It's just not us that have a lot of options. Every team is going through the options and then narrowing it down to what they feel is real and not real and then making the decision.

How late will you be working tonight?

I had the chance to pick Blazers Scout Chad Buchanan's brain a little bit on a few draft topics.  Here's our conversation...

Then you've got the Power Forwards in the late first round but we've always felt that post players end up moving up at the end of the draft because finding bigs is more of a challenge.

In terms of the 4s, you guys brought in Demarre Carrol, Dante Cunningham, Jeff Pendergraph, Tyler Hansbrough... is there a four in that same range that you didn't bring in here to Portland that maybe you wish you got a chance to take a look at up close one more time?

[Editor's note: Gibson did not make the final list of Tuesday's workout participants.]

Is this really a weak draft or do some teams call it a weak draft because there's a lack of quality 5s and big time scorers at the 2 and that's what they are looking for?

I think people consider it weak because there's not a lot of star power. When you look at a draft you're looking for all stars and potential studs and I don't think there's many of those. I think Griffin has some star power but after that there's a lot of question marks with a lot of guys. I don't think there are weak players in the draft, I just don't think there are a lot of high-calibre elite talent in this draft. There are definitely guys in our range where we are picking that can be rotational players. You just need to know you're not drafting the kid that's going to carry your team, you're carrying a kid that can be a small piece to your team.

Did you happen to see John Hollinger's rating system that had Ty Lawson rated #1 overall?

I did. Not surprising. We do a lot of metrics analysis as well and Ty statistically measures out very good.  He shot the ball great this year, had a great assist/turnover ratio, low turnover guy.  It's not all that surprising and obviously he's playing against some great competition at Carolina. We look at everything. Hollinger does a great job and [metric analysis] is just a small piece of everything that we do when we evaluate these guys.

Is Jameer Nelson a fair comparison for him?

Nah. I think Ty's got great speed. Jameer was really kind of tricky with the ball. I think Ty, if you want to play fast he's going to be very fast whereas Jameer, he can play fast but he's more a pick and roll type point guard. People compare them because of their size but I think their games are a little different.

I feel confident enough in Chad Buchanan's lack of enthusiasm about today's prospects to leave my Draft Prospect Board unchanged.  In other words, I do not expect any of the following six players to be suiting up for the Blazers. I'll pass on Buchanan's assessment of each without providing additional analysis of my own.

Now that's how you introduce a group, isn't it?

Buchanan says: Really improved since this season finished.  Shoots it. Not really athletic for a Power Forward. He's pretty strong and knows how to play. He's changed his body a little bit even since the season has finished, he's really trimmed up. He's probably more of a summer league guy. 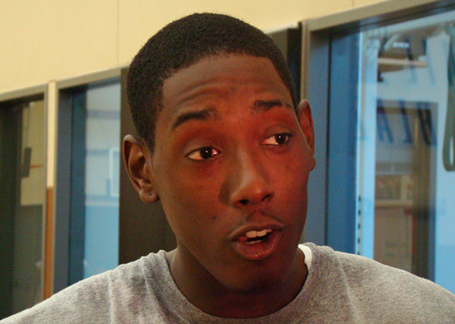 Buchanan says: "Long. Measured out really long. Like his wingspan, like his length. Not sure what position he is. If he's a 4 or 3. He played 4 in college but he's probably got more of a 3 body for our level. Not sure he shoots it well enough to be a 3.  He can rebound, he's athletic, he's got some length to him. Probably a second round candidate."

Buchanan says: "Really like what he can do with the ball. Creating his own shot. Measured out very well athletically. Solid defender. That's probably the area he really needs to improve on -- guarding the ball. Really nice kid, high character kid, really like him as a kid."

He is not expected to be drafted.

Buchanan says: "Like his size, like his toughness, got some competitive grit to him. Makes good decisions with the ball. Really tries to defend. Not a great athlete. His foot quickness will determine whether he gets onto an NBA floor or not. Love his competitive drive and toughness."

He is not expected to be drafted. 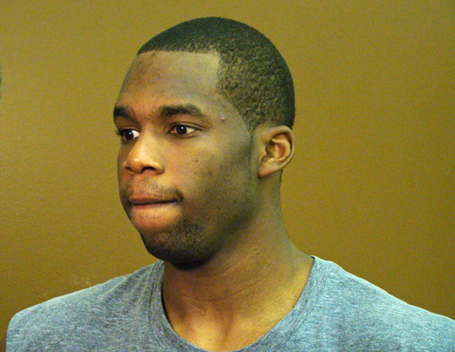 Buchanan says: "Has an NBA skill: catch and shoot. Can shoot it with range. Got a quick trigger. Needs to get a little better at creating his own shot. I don't think in our league he'll be asked to do that a whole lot. Play him off some talented bigs or good point guard and he's going to be a sniper. Probably a second round guy though."

Were you surprised Meeks didn't return to school?

Buchanan: You never know what a kid's situation is. Another year at Kentucky they would have had a very good team. They still have a good team but he might have felt like he was getting the feedback he wanted to hear. He was content with where he might have a chance to go.  Another year of college would help anybody but some kids feel like they are more ready than others. He's always going to be able to make shots. He's going to be in this league to make shots and he already does that so it's understandable that he'd be wanting to come out already.

Have you received a draft promise from anyone yet?

I found this mildly interesting because I've read multiple online reports saying Meeks has received a 2nd round promise. But what did I really expect him to say?

Buchanan says: "Tough little hard-nosed kid. Tricky with the ball. Can shoot it. He's got some toughness. Obviously he's a little small. He's got some strength to him. Got a good feel for the game. He's a little bit of a sleeper in this draft. There's some teams that could definitely pull the trigger on him in the second round."