Let me just say that the single best development for the NBA this year is basketball agents finally realizing they shouldn't want their players drafted by the Memphis Grizzlies and then actively working to prevent that from happening by cancelling workouts, avoiding interviews and visits, etc.  When guys who have worked THEIR ENTIRE LIVES for the dream of making the league and receiving that first big pay check, the one that has the potential to change THEIR ENTIRE FAMILY'S LIVES, are saying "thanks, but no thanks" to your team, coach, city, franchise and your entire crew... that speaks volumes.

So congratulations Hasheem Thabeet for faking an injury.  And congratulations Ricky Rubio for pretending the Grizzlies don't exist and hiding out in Los Angeles of all places.   You are doing your small part to make the NBA a better league and putting some of your own money on the line.  I appreciate your sacrifice. I hope others do too.

On to the links.

The Blazers have been making inquiries all over the first round. Their main target has been Pittsburgh's DeJuan Blair, a burly power forward who plays with a toughness the Blazers lack and coach Nate McMillan would appreciate.

However, Sunday night, there was talk Pritchard has even grander plans. With point guard Ricky Rubio possibly slipping out of the top four, the Blazers are talking to the Wizards about acquiring the No. 5 pick. Pritchard has been on the hunt for a point guard, and Rubio would be a nice fit to round out the Blazers' collection of young, unselfish talents.

As Dave linked below, Jason Quick is back from a month-long sojourn with a very optimistic read on Blazer Management's offseason quotes. It is funny to read Nate admitting to falling in love with the roster...

Quick also mentions the possibility of renouncing Freeland and Koponen.

In case you missed it last week, Dwight Jaynes is hearing that the Blazers are looking to move up.

Over and over I keep hearing that from my friends around the league. Portland, they say, is trying to get up among the top five or six picks. The Blazers are chasing somebody at the top of the draft.

I keep thinking it's Stephen Curry. I've said that before.

Brother Wendell Maxey talked last week with Nate McMillan about getting drafted and about Len Bias.

Conflicting stories remain. Some believe Bias was overwhelmed by the publicity he'd received during the draft process and pressures of being the second pick and used cocaine to medicate the stress. Others chalk it up to a chance decision resulting in death.

"I never even saw him drink a beer. I don't know if it was a one-time deal, but I know I was with him for a couple months and never heard anything about drugs," McMillan explained.

"To this day, I haven't really heard that he was abusing drugs. Normally you would hear something. I never heard that. He loved the game. He was all about basketball. To hear what happened, it was a total shock."

So when Portland drafts in that same position in Thursday's NBA Draft, McMillan said he will largely take a back-seat role while turning his increasing trust to the Blazers' scouts and management.

"I kind of sit back and observe," McMillan said. "This is their time of year."

SJ from Rip City Project has been on the Jeff Pendergraph bandwagon for awhile now and he summarizes the Draft The Graph argument very nicely.

He can fit in well with the second unit as he and Joel both have strong work ethics on the boards and defensively. He could bring an energy that Channing Frye could not. He can easily come in as an NBA-ready player and just do the dirty work. And he is versatile. As KP said after his workout, Pendergraph can run up and down the court which will be great for half-courts. But, after spending three years under Herb Sendek at Arizona State it is quite evident he can excel in a half-court/slow-paced offense. The kind Portland tends to excel at. Back to my point about him not being a diva. Think about his career at Arizona State. He went from being a star to playing behind James Harden without causing any problems. Another reason why Pendergraph fits is his pre-existing relationship with head coach Nate McMillan. They have known each other for a couple years due to Pendergraph playing with Nate's son Jamelle at Arizona State. As we know by the issues with Sergio and Channing, Nate is big on trust. We know that Nate likes to have ‘his guys' around and will give them the belief and trust and what not. Also, Jeff wants to come here.

Rick Johannessen of Beyond Bowie has some more thoughts about bangers.

The big question that I have with all of these potential draftees is: should we be thinking about using a first round pick on a guy that is the likely successor to the Mike Ruffin/Shavlik Randolph (PF3) spot on this team? 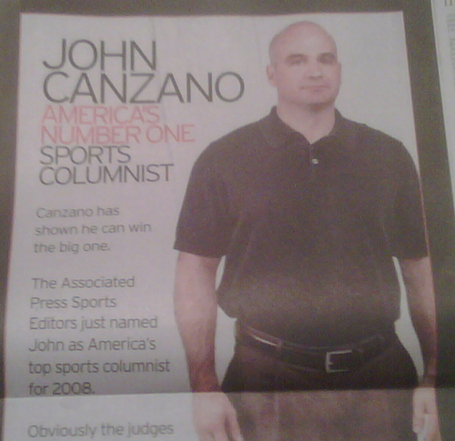 Perhaps only John Canzano can write a Father's Day tribute and include the words "I" and "me" six times in the first six sentences. That's an award-winning ratio. And that column's headline is pretty, like, awesome too.

Please don't mistake the preceding paragraph as a knock on his subject, Cheri Hanson, who is as friendly and dedicated as Mr. Canzano eventually writes.  She certainly deserves a tribute.  But can we agree that it's best for all parties if JC just sends her an inter-office email next time?

"Right now 80 to 90 percent of the teams don't know who they're going to pick," Givony said. "So for people to think that we can 100 percent say what's going to happen, I think it's kind of ridiculous."

The mock-drafters generally grade themselves by the accuracy of their insights, not the accuracy rate of the picks. The most critical thing is to peg a prospect's range, to separate the lottery picks from the late first-rounders and to identify each team's preferences. None of them want to be shocked when Commissioner David Stern steps to the lectern.

The experts know they will always get more picks wrong than right. But they beam when the picks fall into place.

Touching article by Clarence Hill Jr. in the Boston Heraldn about Oliver Miller, who finds inspiration in the memory of Kevin Duckworth.

Miller acknowledges his renewed quest to lose weight and get back in the league was sparked by the shocking death of former NBA player Kevin Duckworth of congestive heart failure at age 44. Like Miller, Duckworth battled weight problems throughout his basketball career and had weighed close to 400 pounds before his death.

Miller said Duckworth's death was an eye-opener for him.

"I don't want to be like that," Miller said.

Honestly there are too many draft rumors to even keep track of at this point.  Check out the following links for heavy reading.

Drop any other fun links for discussion that you find in the comments. And of course, check out the fully loaded FanShots for even more reading.
There is another set of pre-draft workouts this morning. Here's the list of participants in case you forgot their names over the weekend.  Check back late this afternoon for my workout thoughts and any stories that might pop up.  Tomorrow's workouts will be the last of this year; names should be released today and I'll pass those on as they become available.
-- Ben (benjamin.golliver@gmail.com)