Needless to say, none of the prospects that appeared today will be making the Draft Prospect Board.

Joe Freeman has the relevant quotes and material if you're interested in the guys that worked out.  I wasn't particularly excited about anyone present although Bamba Fall was kind of breathtaking. 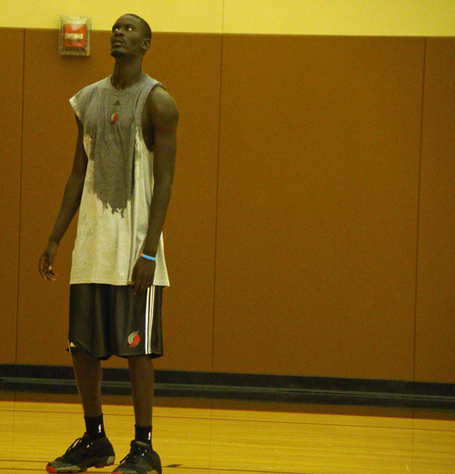 The only other guy really worth mentioning by name at this point is Jimmy Baron.  He shot 43% percent from the three point line in college, peaking at almost 48% his sophomore year. Jimmy was the first prospect this year to re-enter the gym after the workout was over to put up more shots.  He makes a ridiculous percent of his shots when unguarded in the gym.   He is absolutely a professional-quality shooter and his stroke/dedication caught the eyes of shooter's shooter Martell Webster.  The two discussed shooting for 10 minutes or so. 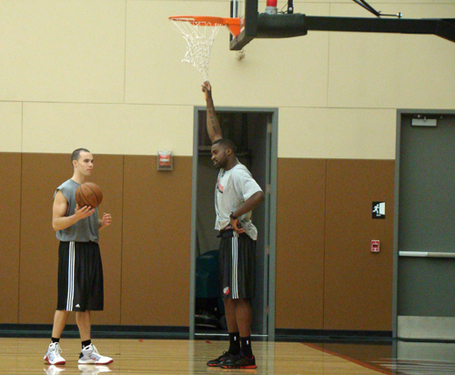 Martell walked away from the exchange shaking his head and telling Assistant Coach Dean Demopoulos, "He can really shoot."

But enough about the draft prospects; Martell was the story again today just like he was on Tuesday.

So click through for a complete rundown of Martell's shooting drills including tons of pictures.

As I wrote earlier this week, Martell is limited to shooting for just 20 minutes at a time.  Soon after writing that, I happened to see former NBA Coach Eric Musselman write the following on Twitter about Lakers forward Trevor Ariza.

"In January 2008, he broke his foot and his foot was immobilized," [said Lakers Assistant Coach Brian] Shaw, "It made him concentrate on his wrist and his arm."

Ariza certainly has been lauded for his improved shooting, particularly during the playoffs.  Martell, similarly afflicted, also seems to be focusing on shooting hand mechanics. Let's go through his drills one by one, shall we? 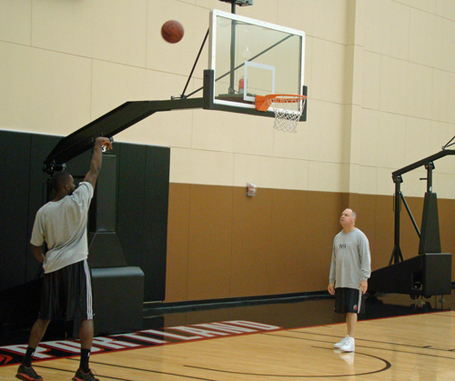 After dribbling down and back a few times to warm up, Martell because taking one hand shots from about 8-10 feet in quick succession. His emphasis was on setting the ball in the same place each time, keeping his shoulders completely square and relatively quiet, extending his arm up and straight during a clean shot release and holding his follow through. Most of the focus was waist-up. 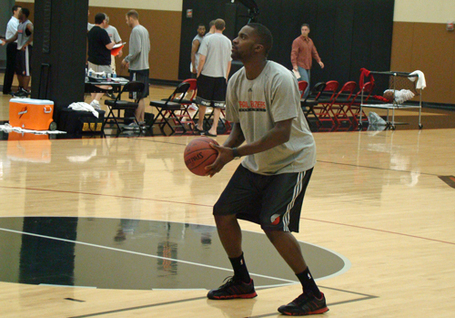 Martell then backed out a little bit to 12-14 feet and shot using both hands but without jumping.  How he shoots with a watch on his wrist (even though it's his off wrist) is beyond me. Same mechanics here as he is essentially "building up" or "progressing" to the full-fledged jumpshot/3 pointer work that will follow.  His focus again was on complete consistency through all aspects of the shot. Nothing fancy, no turnarounds, pumpfakes or anything... just shoulders square, small-lift shots, slightly more active than a free throw in a game situation.

After that, Martell backed out to the 3 point line and began taking jumpers off rhythm passes from Monty Williams.  When shooting simple jumpers while hugging the 3 point line, Martell makes an absurd percentage of his shots (70%+) and is capable of rattling off 4 in a row that swish through and land on the exact same spot on the court every time.  It's fun to watch.

After maybe 5 minutes of straightforward jumpers, Monty progressed Martell to the final step, which was actually something I haven't seen any of the wings do for an extended period of time before.  Martell would receive a rhythm pass from Monty and wait for instruction; Monty would yell whether Martell should make one ball fake, two ball fakes or simply pull up and shoot.

Here's a shot of Martell ball-faking to an imaginary point guard at the top of the key, before raising up to stroke a jumper. 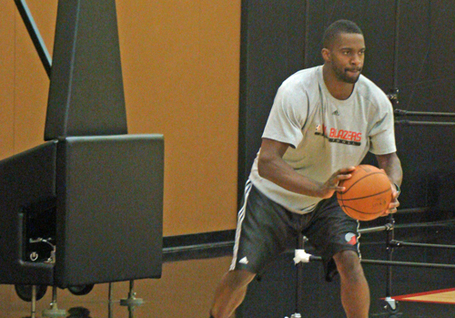 Martell's ball fakes to the right looked different, with the ball raised up over his head as if he was going to dump a pass into a posting up Oden or Aldridge. Martell worked on taking the ball from the lower position across his body and raising up as well as taking the ball from a higher position above his head and quickly pulling it down to set himself up for a quick-trigger jumper.

Although these are not complex movements they will certainly lower shooting percentanges when done at full speed and in rapid succession.  Martell's accuracy tailed off a little bit but it was during this portion where I got a solid reminder about how much quicker and cleaner Martell's trigger is than Nic's or Travis's. There's a significant talent gap there.

Lastly Martell moved to the top of the key and worked on a few pull up jumpers off the bounce, taking a behind the back dribble or two to set up his full jumper in rhythm.  Again he was hitting consistently although he didn't continue those shots for too long because he was coming up on his time limit.

And here's a picture of his Hummer with pretty sick rims. 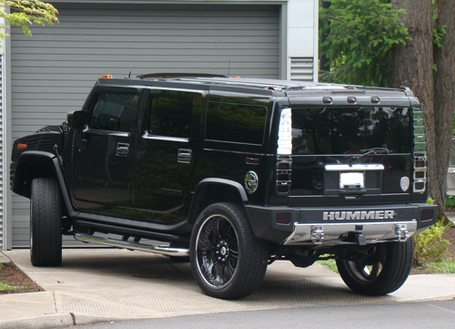 Last but not least, here's Blazers scout Chad Buchanan getting some much-deserved facetime on Comcast TV. 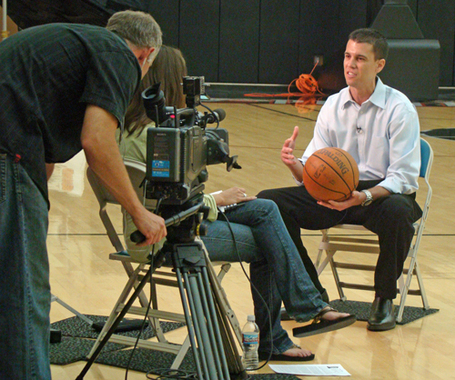