Man, so much to cover, so little time. Let's hop right in.

The team carried 15 players on its roster last year and it's natural to assume that they will do the same again next year.  But at the bottom of yesterday's Full Court Press there was a line from Marc Spears about teams looking to trim the roster numbers down for economic reasons.

Discussion in the gym today suggested that the team might carry only 14 players next year and would even consider carrying just 13 players, assuming guys like Steve Blake and Martell Webster break training camp in good health.

Keep that in mind when constructing draft day, trade and free agency scenarios.

This news, coupled with ongoing whispers that Koponen (possibly) and Freeland (likely) might be renounced for greater salary cap flexibility, might add fuel to rumors that the Blazers are indeed looking to use their cap space to target a big name, big dollar player.

Does carrying 13, 14 or 15 guys make that big a difference when it comes to the on-court product?  It didn't last year and it's hard to see how it would in 2009-2010 barring a crazy, crazy rash of injuries. But does having those extra cap dollars make a difference in targeting a big name free agent or trade prospect?  Maybe it does.  Let's say you are looking to facilitate a lopsided sign and trade (Hedo?), paying only 13 guys instead of 15 guys might give you the extra million or two dollars under the salary cap to get it done.

If the team does trim its roster numbers, guys like Mike Ruffin and Shavlik Randolph will be on the outside looking in.

Kevin Pritchard addressed the media after the workout ended.  He said that the workout was "very competitive" and that "I wouldn't be surprised if 3 or 4 of the guys here got drafted, maybe 1 or 2 in the first round. Every year we say 'don't make early decisions, keep your mind open,' and I don't see this year as any different from the past."

Here are some choice cuts from KP's Q and A...

KP on Brandon Jennings
I asked Kevin Pritchard for his thoughts on the Brandon Jennings / Ricky Rubio beef from last week.  As regularly as KP talks about "culture" and finding "the right guys" I assumed that he would have some strong feelings about Jennings statements, which have seemed to polarize opinion about him.  One camp seems to laud his brash confidence and competitive spirit.  The other seems to chastise him for the low-blow nature of his statements and potential inaccuries in his description of his match-up against Rubio.
Although KP did not outright defend Jennings' statements, he did try to put them in context, focusing on the gist of Jennings' statement which was, he believed, that Jennings simply wanted the opportunity to play against the best players, including Rubio.  "The nice thing about the NBA," Pritchard said, "is that if you want to play against the best, you'll get your wish."  Aside from that statement, Pritchard would not say whether he thought Jennings had helped or hurt himself with his comments last week.
During an earlier conversation, Pritchard reiterated the team's practice of following prospects for years prior to their draft eligibility.  My sense was that one statement or series of statements, even if potentially inflammatory and delivered less than 2 weeks prior to the NBA draft, would not outweigh the other intel the team has gathered about a player.

Today we briefly saw some 3 on 3 workouts followed by the standard jump shooting portion. Today's workout lasted almost 2 hours, a fact that Nate McMillan was quick to point out to the media.  The prospects all seemed quite tired by the time they got around to shooting and there were more errant shots than usual, despite the high quality of the players assembled.

The following is a snapshot look at the six guys who worked out today along with some quote excerpts from Blazers scout Chad Buchanan.

I will be updating the draft prospect board to include some of these guys later this afternoon.

Terrel Harris (6'4" and 190, Guard, Oklahoma State) is not expected to be drafted and the team's comments about him made it seem like he has a ways to go.  Buchanan said, "I like him defensively, he's got some toughness to him... if he can tighten up his ball skills he's got a chance someday to sneak into our league." Moving on.

Joe Ingles (6'8" and 195, Guard/Forward, Australia) is on the cusp of being drafted.  He shot the ball relatively well today but, as Sean Meagher pointed out, his 3 point form involves bringing the ball down to knee-level. Not the best look.  He is a tall lefty with a goofy haircut so he is doomed to the "lesser skilled Troy Murphy" comparison. Buchanan said, "He's got a good feel for the game, good ball skills for a guy his size."  Pritchard said, "Versatile, kind of a point forward. Can shoot the ball and we need shooting so he's in our target. Handles the ball a lot better, can be a little crafty, has a little Chris Mullin in him. Obviously Chris was a multi-year all-star... but Ingles was intriguing." But does "intriguing" get you drafted by the Blazers this year? Doubtful. 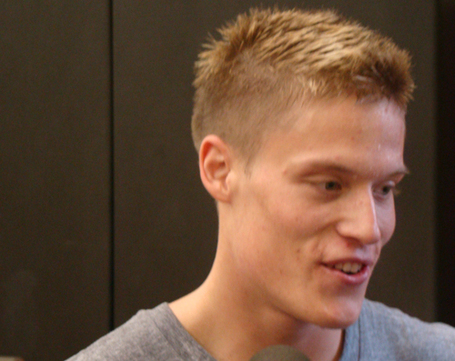 Pictured above, Jonas Jerebko (6'8" and 231, Forward, Sweden) was the most impressive physically today, with great size and carrying strength in his frame that you don't generally expect to see from European prospects.  Unfortunately, I'm not sure he understands the rules of basketball -- the leather sphere is actually supposed to be thrown through the metal ring that hangs above the ground -- because he shot something like 15 percent or so uncontested during the media open session.

Was he nervous?  Was he simply displaying the form that led him to shoot 31.4 percent from 3 point land for his career?

Buchanan said, "we like his versatility on the defensive end, we think he can guard multiple positions... he's never been asked to be that offensive go-to guy, good athlete, definitely an NBA player."  I asked KP if Jerebko shot the ball better during Eurocamp.  KP was noncommital and, honestly, it seemed like he couldn't remember.  You can't really blame him. Currently Jerebko is seen as a late 1st or early 2nd round selection. I'm not sure he's a fit.  If you're picking between international small forward prospects, I think you stick with Casspi.

(Sidenote: this guy must dunk A LOT because his career field goal percentage is an astonishing 59.6% while his 3 point percentage is roughly 1/2 that)

Jermaine Taylor (6'4" and 210, Guard, Central Florida) was a multi-tool offensive threat in college, a four year college guy that capped his career by being named Conference-USA player of the year.  Buchanan had some solid praise for Taylor, "Rugged and tough from the wing, he can shoot it, he's athletic... he's got to get better guarding the ball. He sprained his ankle today... he gutted it out today, give the kid a lot of respect."  Taylor is seen by Buchanan as an mid-to-late second round pick. His tweener size draws questions like "Will he be able to score in volume at the next level?" and that probably makes him highly questionable for the Blazers.

Garrett Temple (6'6" and 190, Guard, LSU) is unlikely to be drafted and everything about his game reads incomplete and not yet ready for the next level.  Buchanan said, "Like his length, like his defensive basketball IQ. Not going to give you a ton of stuff offensively. I think that's what will be his hurdle in our league... We liked him [during his May workout in Portland] and wanted to see him against some different kids the second time through." Despite the second look, it was difficult to detect any enthusiasm on Buchanan's behalf.

Marcus Thornton (6'4" and 205, Guard, LSU)  was the clear-cut best prospect in this group. Thornton displayed the best shooting stroke of the bunch and is built like he could run through a wall.  He looked super strong. But also super short to play wing in the NBA. Still, there could be some interest as his overall skill level is high and he's a 4 year college guy from an established program that was named SEC player of the year. Buchanan said, "Definitely an NBA player. As quick a trigger as there is in this draft. good with the ball. Quick hands, probably an average athlete for his position. A little small for a 2 guard. I think teams will be looking at him late in the first round."

When I asked KP to compare Thornton to another sharp-shooting, slightly undersized 2 guard that we saw last week, Wayne Ellington, KP just smiled and said, "I don't want to tell you where we have those guys on our board." Haha.