My Call: The Blazers' 2009 First Round Draft Pick

Share All sharing options for: My Call: The Blazers' 2009 First Round Draft Pick

Much as Ben described in his draft prospect board below, my inbox is slowly but surely starting to get taken over by "Who are we going to draft?" posts.  My stock answer so far is that it's too soon to tell, for me anyway.  Our low pick number makes it difficult to forecast what the team will look for.  Most of my colleagues seem to think they'll move up or move out, adding another layer of complexity to the process.   For now Ben really has the best window into the process of any of us and I'm inclined to lean on his data and analysis as superior to my own.

I have a decent eye for team needs, but the rule of thumb is to take the best player available in the draft and fill your needs with veterans.  Providing the Blazers pick at #24 they're as likely to select a shooting guard as a point guard or small forward.  Not much help there.

I don't want to bail out completely, however.  Even at this incomplete stage I have a suggestion that can't really go wrong no matter which way the draft turns:  up, down, sideways, or otherwise.

You see, no matter how I puzzle around the problem I can't get over the fact that the Blazers need a veteran presence coming off the bench.  "Veteran presence" and "draft" are by nature exclusive terms, leaving a nearly-unsolvable problem.  "Nearly", I say, for I have solved it.  You want the lock-tight, guaranteed-winner Blazer draft pick for 2009?  It's easy.  Go with this guy: 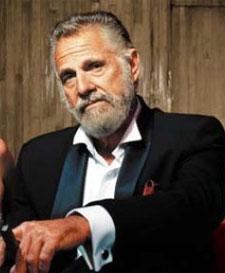 The team can't lose with The Most Interesting Man in the World.  He's a veteran who will never go out of style.  He can suit up in this league for as long as he wants to.  Want the analysis?  Here are the Top Ten reasons why, straight out of the scouting dossier on him.

1.  During a stint nude modeling for art classes at UCLA back in '65 he personally taught Lew Alcindor the sky hook using motions adapted from a Tibetian sunrise ritual.

2.  The conversation with season ticket holders behind the Blazers bench will be scintillating.

3.  Unlike most Blazer draft picks, it's literally impossible to overrate him.

5.  He has no problem adhering to Nate's "no headband" rule.

6.  He will immediately up the level of groupie hanging around the Portland locker room.

8.  He may be the only man on the planet who can broker an equitable minutes split between LaMarcus Aldridge and David Lee.

9.  The highlight film montage they show when his name is called will blow your mind.

10.  And you thought riding in Blazer One was luxury!

And a couple of bonuses...

12.  The champagne poured during the championship locker-room celebration will cost more than Paul Allen's yacht.

12.  He brings his own victory cigars and lights them whenever he damn well pleases.

13.  He doesn't always read blogs, but when he does he prefers Blazersedge.

If you're on board with this, feel free to add your own reasons in the comments.  If we can get up to 100 (go ahead and number them) maybe KP and company will take notice.