Twelve talented men came through the Trail Blazers Practice Facility in the past two days to display their basketball skills. I don't think we'll see any of them in a Blazers uniform; it's hard to imagine most of them sticking anywhere in the NBA.  Rather than being a showcase like most draft workouts, the past two mornings felt like, at worst, a graveyard for dreams and, at best, a treasure hunt that will probably result in everyone present going home empty-handed.

The takeaway from the past two days of tryouts, on the player side, was a reaffirmation of how large the gap is between serviceable (or even quality) college player and true NBA player.  While the man conducting the workouts, Blazers scout Chad Buchanan, had no shortage of nice things to say about the players in attendance, it was fascinating to see just how many ways you can be a quality basketball player and yet still have something seriously missing from your game.  Something that will, more likely than not, keep you from your dream of being an NBA player.

Here's a list of missing pieces that I tallied as I watched during the 20 or 30 minutes that the workouts were open to the media...

We probably don't need to match each item on that list with the specific player.  But if there was one name that I was anticipating more than the others, it was Connecticut's Jeff Adrien, not only for his potential fit with the Blazers but also because of the school he attended and the continued success that he enjoyed at the college level.  Today's session concluded with a simple square cone drill -- the players were timed as they ran forward to a cone, then slid left to a second cone, then back pedaled to a third cone, then slid right to a fourth cone, then repeated the process backwards -- that measured lateral quickness and start/stop speeds (explosiveness).  Adrien noticeably dragged one of his legs behind him as he struggled through the routine.  It was difficult to watch. One scouting maxim: if a stationary cone can take you off the dribble, an NBA player will be able to as well.   Adrien was the first player to head for the locker room after the workout ended.

That sequence was more cause for meditation on the open-ended question I asked this morning.  And despite the effervescent personality of a guy like Jeremy Pargo, these players are fully aware of the odds stacked against them.  They are smart enough to say all the right things to the press, shake hands with the coaching staff before, during and after practice, keep a smile on their faces and be vocal leaders during workouts.  They do these things because, despite being closer than 99.9% of society to their dream of being an NBA player, they realize their professional trip, which is likely to be long, winding, exhausting and involve many, many stops, is just beginning.

As easy as it is to rip on a player like Steve Blake, Sergio Rodriguez or Jerryd Bayless, the gulf between their talents and a guy like Pargo's is vast and is most obvious when watching them in the exact same setting.  Watching Pargo shoot (and miss) his pocket jumper from where Bayless regularly drills NBA 3s was painful. And that is no specific knock on Pargo, he was far from the worst shooter over the last two days.  Watching passes sail into the wall during 3 on 3 games yesterday made me, yes me, nostalgic for Sergio to Rudy alleyoops.  Watching a guy like Chris Johnson sport an Anthony Randolph physique (6'11", 190) and go 0-5 and, eventually, 1-10 on uncontested 18 foot jumpers even had me briefly reconsidering the merits of re-signing Channing Frye.

Of course these workouts were set up, in part, to test these players' specific weaknesses. The many skills that carried them this far were on display too. Alonzo Gee sprung with ease to throw down an alley oop pass; Demarre Carroll battled for rebounds like you would expect from a backup 4; Joe Krabbenhoft went diving on the ground Matt Bonner style.  There were NBA plays being made.  Just not enough of them. And not from any one player in particular.

Circling back to this morning's debate, I'm not sure I have enough data to settle on a definitive answer to the question, "what separates NBA players from fringe players?"  I did love that the first answer provided was "luck" and that that was quickly followed by "opportunity."  Health goes right along with both of those and, no doubt, that is the deciding factor for dozens of players every year.  In the end, "opportunity" is probably the best umbrella answer although it's something of a cop out.  Access to quality coaching at a young age; regular skill development; solid workout programs; supportive parent(s); a college scholarship; television exposure; media training; a team drafting to fit a specific niche need... those are all things that comprise "opportunity" and they are all things that absolutely can push someone over the top as an NBA player.

That aside, I think height is at or near the top of this list of factors: a few inches can just as easily separate an NBA power forward or point guard from their D-league counterparts. Same thing with raw quickness: the NBA is brutally, sadistically fast.

Those of you answering basketball IQ made compelling arguments.  Obviously that's difficult to assess in simple workouts like these and the scouts instead turn to the "body of work" to get a sense for a player's mind.   But there are plenty of really smart players who simply can't keep up and are never even invited to draft workouts. At the end of the day there are more talented players that get drafted with the idea that they can be developed into smarter players than there are smart players that overcome physical deficiencies to find a way into the league.

The real takeaway on the team side was a nice peek behind the curtains at the Blazers scouting machine.  Three members of the coaching staff -- Prunty, Canales and Demopolous --  were in attendance today as the quality of players present was higher than yesterday but they mostly watched as the scouts put the players through their paces. I think the scouts enjoyed their time in the sun; certainly it's well-deserved given how little public credit they receive and the long hours they log on the road. 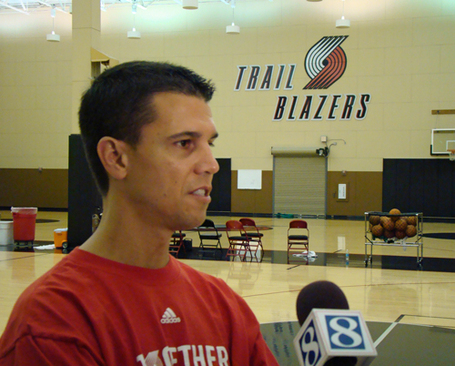 Chad Buchanan talked at length today regarding the numerous ways the Blazers' approach might differ from other teams around the league, highlighted by their pro-active networking with college programs.  Interestingly, Buchanan will be attending tonight's Lakers game before meeting with the coaching staffs at UCLA and USC, something he's done for the past 3 or 4 years.  While he admitted it can be difficult to get truly accurate information from college coaches that have a vested interest in seeing their players drafted, he stated that the flow of information has become increasingly reliable and realistic as his relationships have progressed over the years.  The way he described the team's cultivation of college soruces recalled KP's constant trade feelers with other GMs: the more contacts that are made, the more likely that valuable information is to be found.

Buchanan also stated that the team picks the brains of college trainers. This seems like a smart, obvious (but slightly creepy) extra step to add information to a player's portfolio.  One would hope, for the sake of the players' medical privacy, that the trainers remain tight-lipped.

Two additional pieces of information for you to parse.

1. Yesterday, when asked when trade talks might begin between the Blazers and other teams, Buchanan stated that that would be something that Kevin Pritchard and Tom Penn would begin to take seriously at the Chicago pre-draft camp. The casual mention of Penn in his response made me think that T. Pain isn't on his way out the door... at least not yet.

2. When asked today whether the player that the team would be interested in targeting would be available at #24, Buchanan said "probably not" and indicated that the Blazers, if need be, would "use our resources to move up" to attain a targeted player.  Obviously he didn't give any indication about who that player might be but it was interesting to hear this early and this emphatically that trading up was likely.  Obviously the Blazers have the assets to facilitate such a move (2nd round picks, cash, small contract players); but it's nice to hear from someone actively involved on draft day that such a movement is already being seriously considered.

Or it could all be smoke screen.