Share All sharing options for: Pritchard: Bayless Will Play in Vegas Summer League

I am so happy. I had to share that news immediately.

KP also said Greg Oden and Nic Batum were not planning to play in Vegas. Nic will not participate because of his plans to play with the French national team this summer. 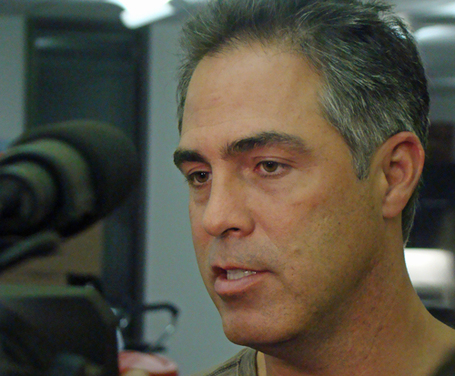 KP seemed a little tired today but certainly he wasn't disappointed. He struck an upbeat tone and sounded eager to 1) step away and rest and then 2) get cracking on his offseason plans.

Here are some of Kevin Pritchard's thoughts from this afternoon.

On the abrupt end to the season...

It's always bittersweet. Especially when you have a team like this. We all get caught up in the wins and losses. My initial reaction when I woke up this morning was that this team walks away, it accomplished a lot, the specialness in this team was its personality. We have great guys, fun to be around, as this building becomes emptier it happens so fast, it happens overnight, you've got to get out, I miss being around the guys, I miss being a part of it.

What's so interesting is that this team took on a dynamic that was very special. I don't think we as a group, in terms of management, coaches and players, realize what we did as a young team. We broke all the metrics. We broke all the molds. Our challenge is can we continue to do that. As young of a team with 54 wins, no issues off the court, phenomenal chemistry.

I couldn't have written it any better other than to say I wish it could have continued. And with talking to the players its obvious they felt like they could win that series.

Is this team ready to compete for a title next year?

Right now it's important that you get away from it. We'll get back to studying. You guys know us.... we're going to get aggressive in the draft, free agency, we'll do everything we can to get this team better. I don't see that there's going to be wholesale changes. I do believe that this team has a great core of guys. We are going to take care of those guys and make sure they are around a lot time. Today I'm elated but I'm also sad a little bit because I wanted this to go on.

The season is over...

The players seem proud of what they've accomplished...

"It's apparent in our exit interviews. We've done about half of them today and the rest of them tomorrow. They're proud of what they've done. So are we.  We couldn't be more proud. We felt like there was some unfinished business."

What lesson did you take from the playoffs?

"Well, the first game of every series is critically important. And you know here's the thing about the first game, you look at it, we had basically no experience. They didn't know what to expect. If we have that first game back I think this is a whole different series.

Next year, the question is: did we learn the lesson? We only lose if we don't learn the lesson. I think we did. I saw it on their faces and even though we didn't play well last night, I didn't think we played our best game.

You have to give Houston a lot of credit. They played phenomenal. We still competed, kept competing, just couldn't get over that hump. That experience is what we wanted for this team. Could you say we got a little greedy and wanted to get another win to get it back here? Absolutely.

I couldn't be more happy for this organization and for our community and for our players."

Do you need to go out and get a veteran this offseason?

"I would say we have a lot more veterans than people realize. And that's another way of saying we have more leadership than you realize. Brandon, LaMarcus great leaders.

Przybilla without a doubt took another step in his development this year. Many times I saw him grabbing the guys and saying come on, let's get together.I saw Blake doing it. Do we need veterans? Absolutely. But we're sort of organically doing it too. I don't want to bring in somebody who's just the veteran guy. I want to bring guys that are good for the team, that can play, and that can ultimately get to where we want to go."

Do you expect additional trade activity around the league because of the poor economy?

"It could be. It could be. There are teams obviously that are looking to change over their rosters. We've been there, we've dont that. You just don't know. It hasn't been high on my radar. We've been so focused on the playoffs. We'll do a deep dive and we'll get an understanding for what the league is [looking at]."

What are your offseason plans?

"I'm hoping to sleep a little bit this offseason. That's one of the things.

There are decisions to be made. I want to get away from this for a little bit. Perspective is very important here. We know that we're not going to make these grand changes unless we feel like it absolutely helps us."

What was your message to Greg and what are your general thoughts about his year?

It was up and down. There were times I really thought he affected the game.

The big thing with Greg is he's got to get comfortable. We've got to get him in great shape and get him comfortable out there. Once he gets comfortable the game slows down for him a little bit.

Right now it's fast for him. That happens with young bigs. It just does. For some reason it takes a little bit of time. We're not discouraged. We know he has to have a big offseason. That's the big key. He needs to have a great offseason. If he has a great offseason I expect huge things from him next year."

His task this summer...

"We feel good about our future. We have to add the right pieces. That's my challenge, management group's change. It's a lot harder to get here. It took a lot of pain and some tough times and this community had to go through it. So did the players and coaches.  We haven't climbed all the way up the mountain. We know we have to do that. We've got to keep working hard and I know we will."

Nate seemed a bit surprised or taken aback that the season is now over but was in a jovial mood today, laughing and joking.  Here's a sample of his thoughts. Read all the way to the bottom to read Nate's thoughts on his own contract status. 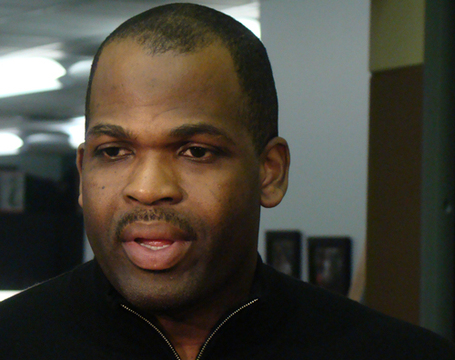 On the message last night...

"I thought it was a good year for our team. We accomplished a lot. As we mentioned at the beginning of the season, the next step for this team was to reach the playoffs and see what we could do once we made the playoffs. We've been there now. The next step for us is to be competing in the postseason and going after a championship."

The end of the season snuck up on you guys...

"That's always hard. I tell the guys that everybody feels like they want to retire and they want time off. And what are you going to do with it? We are built to work and stay busy and all of a sudden it just comes to a halt. Like last night.

As I told them, I wasn't prepared to give you this speech that the season is over and that we'll be meeting tomorrow for the last time for awhile. It's where we are and what we have to do is start planning on how we can make this organization better, make this team better. Each one of us, making ourselves better so when we come back next season we will be better."

Are you ready to dig in or are you planning to take some time off...

"Well, we are going to get away from it. We gotta do that. We'll take a week or so to get away and for me it's been 3 years of just basketball with the Olympic team and with my team and get away for a a week or two and come back and get ourselves ready for the draft."

Did you focus on the past or the future in talking with the players...

"Where we were and what we've accomplished and where we want to go. Next year at this time we want to be playing. I feel that if we do the things we need to do, all of us come back better than we were this year, there's no reason why we shouldn't be."

On how Nate can improve as a coach...

On the exit interviews...

"It's for the guys to ask questions and for me to let them know what I thought about the season. Their roles and the offseason. Our plans for next season. They've gone smoothly. They've gone pretty quickly. Again, it was a good year. I thought these guys gave us everything they had. It showed in how they played and the games they won. It was a good group and they did some good things this year."

The 3 most memorable moments...

"It's not 3 moments. We had an unbelievable comeback in the Rose Garden. Our first playoff game. Our first road game. The first game we lost to the Lakers, I'll never forget that, what our guys were looking like during that time. There were a lot of great moments."

On his vacation plans...

"No I haven't planned anything. I have to get the exit interviews out of the way and then decide on when I'm going to have some free time. August is our downtime and I'll look to take some time. I don't know. I know I'm going to get away. I've told them that August is off limits for McMillan. It's off limits."

Nate also said that his contract situation is "fine," "good," "great" and a few other positive, happy words and he did not foresee any extension talks in the near future. He said he has one (possibly 2) more years on his deal and he plans to honor that deal.