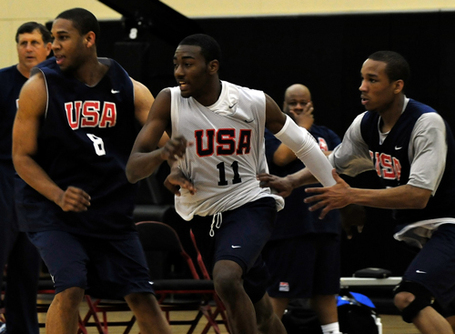 Team USA coaches John Olive and Antwan Harris look on as Xavier Henry, John Wall and Avery Bradley get after it. Photo by Alex McDougall.

The Nike Hoop Summit is a high-school all star showcase event that pits the USA Junior National team against a collection of International prospects.  In this post, I'll preview my four favorite members of Team USA.

--------------------
As mentioned in this afternoon's profile of the world team, the international squad is facing a significantly more talented Team USA.  Although there's been some debate among scouts about whether this year's group stacks up to previous classes, by my count there are at least 4 players who could make the prep-to-pro leap if a year in college wasn't mandatory: Xavier Henry, Renard Sidney, DeMarcus Cousins, and my favorite prospect since Kevin Durant, John Wall.
Click through to read short profiles and see pictures of each player. 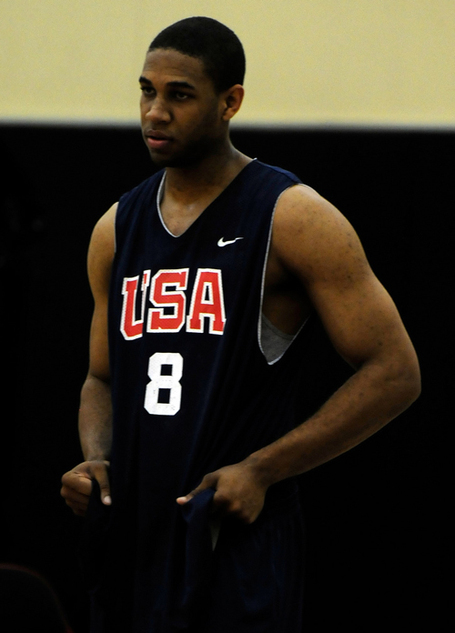 Referred to as "X" by his teammates, Henry carries himself with a Carmelo-esque confidence and he seems to have assumed a leadership position on this fully-loaded squad.

His on-court air is fitting because he has Melo's ability to create his own  shot (not always a good shot) from anywhere, utilizing a variety of dribble moves, step backs and pump fakes.  At 6'6" 225, he is a little bit shorter than one expects from NBA small forwards but his frame is large and his body control gives him a nice combination of strength and fluidity.  He favors his left hand noticeably but is creative enough, and possesses enough leaping ability, to get a good look close in against any defender at this level.

The questions that I'm sure will dog him are: "Is he another Mike Beasley? Will he be able to transition his offensive game to the NBA?" as he should be able to put up big numbers no matter where he goes to college.

Grant High's Mike Moser was matched up against Henry and was running himself ragged, denying Henry the ball and making him settle for outside shots. That said, there was a noticeable talent gap (and physicality gap) between the two players.  Moser looked like he was working on every possession; Henry looked like it all comes naturally.

Bottom Line: A prime one-and-done candidate, he should have every opportunity to break out the full arsenal of moves on Saturday. 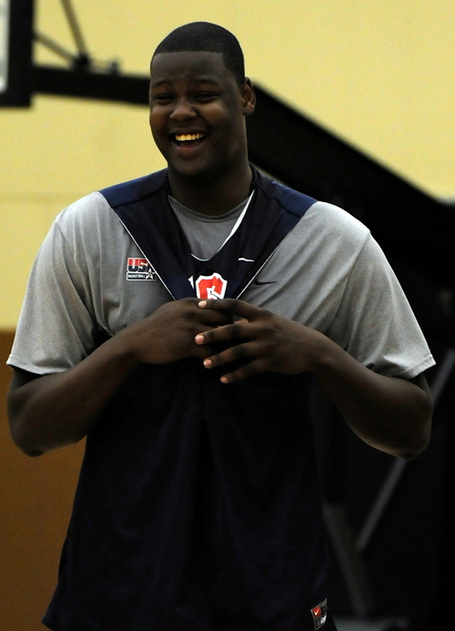 I previously wrote about Sidney for my friend Damion's site: ACC Ballers.  Here's a link to that article.  Sidney's attitude seemed to rise to the level of his competition today, as he did quite a bit less sulking and was less theatrical than he was at the Les Schwab Invitational.  In the evening session, the goofiness did start to come out a little bit (pictured above).  There seem to be some attention issues there.

In any case, he remains a physically dominant presence.  An oversized 4 or a short 5 that can shoot the 3, pass the ball and pound the glass and pretty much truck anyone that wants to tangle.  He matched up for most of today with DeMarcus Cousins and held his own on both ends.

Bottom Line: He is a freaking load.  World team bodies will be crashing to the floor in his wake. 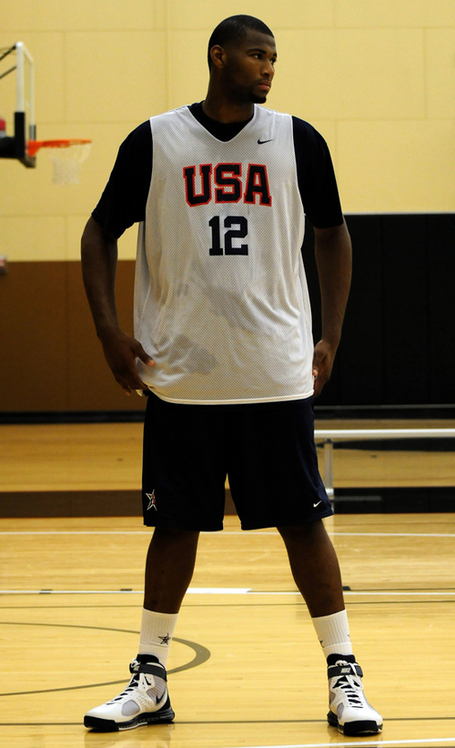 The largest player on the Team USA roster, Cousins runs 6'11" 270 and would be a no-brainer high first round pick if he was eligible for the draft this season.  He bantered a little bit more than the coaching staff might have liked tonight but he seems to have a good head on his shoulders, a strong competitive spirt and a desire to dominate in the post.

He was eager to bang with Sidney and displayed a number of nice moves around the bucket.  His practice squad team was guard-dominated so he probably wasn't receiving the quantity of touches that he would have liked.  It didn't faze him.

He found himself at the top of the key during zone offense drills and easily hit a number of shots from 12-15 feet with a hand in his face.  When he extended to the 15-18 foot range, his field goal percentage tapered off a bit.  A knock I'd heard on him coming into this week was his over reliance on his jumper.  Today, he didn't have the opportunity to shoot that much; his teammates were glad to do their part to help alleviate that flaw in his game.

On defense, he manned the paint and prevented easy shots at the rim.  He made Sidney work for his points and seemed to take pleasure in doing so.  Playing against so many talented shot-takers, it wasn't surprising that Cousins didn't block many shots in practice but I would imagine he will send a few into the Rose Garden crowd on Saturday.

Bottom Line: Potential NBA All Star: his size, speed, and physical gifts all add up. 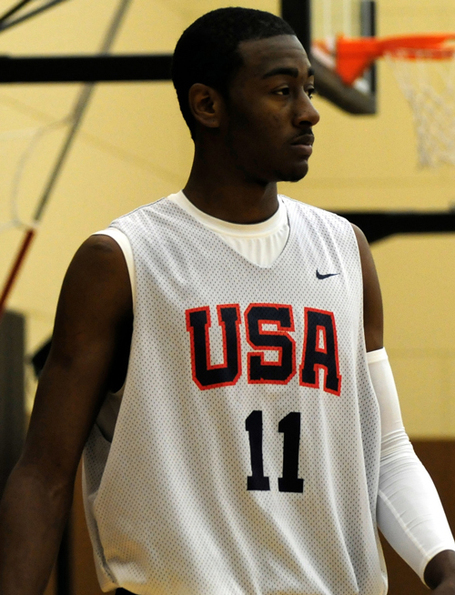 A full profile of Wall, including a transcript of my short chat with him, will run Friday morning.

Bottom Line: The single best reason you should go see the Hoop Summit on Saturday. I have added him to my list of "interests" on Facebook.