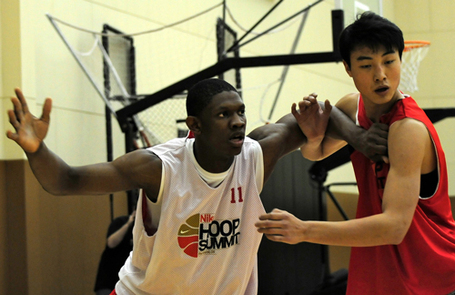 The Nike Hoop Summit is a high-school all star showcase event that pits the USA Junior National team against a collection of International prospects.  In this post, I'll preview my four favorite members of the World team.

After watching the World team practice the last two nights and watching Team USA for about an hour this morning, it is clear there is a significant talent gap between the two teams again this year.  I think it's fair to say that team USA sports 9 of the 10 best players out of the combined 20 players on the two rosters.  And given the intensity of team USA's first practice this morning and their emphasis on pushing the ball, it should be an entertaining, high-scoring, one-sided game on Saturday.

Despite the skill gap between the two teams, there are certainly some players and storylines to keep an eye on when it comes to the World team, including their sure-fire future lottery pick. 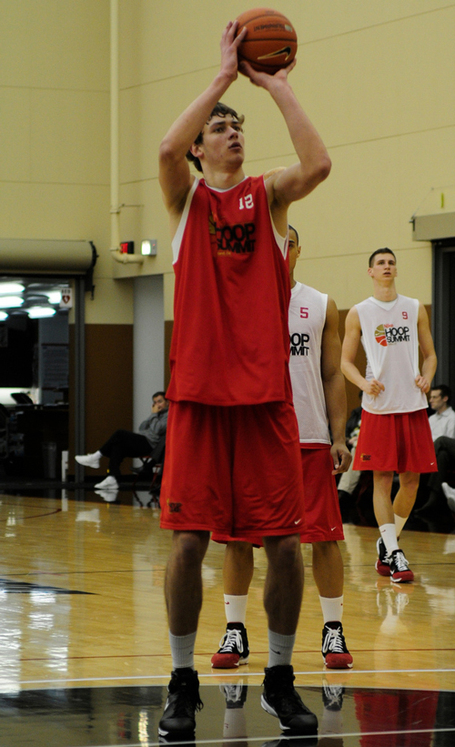 Without question, Donotas is the class of the World team roster.  A 7 footer from Lithuania, he possesses a natural understanding of basketball, particularly on the offensive end.

He is comfortable with his back to the basket and facing up; the range on his jumper is impressive.  He is lean and therefore quite agile.  He displays great vision and timing on his passes, particularly for a big man. Saying he has Sabonis-like creativity would be overstating it, but he is not afraid to squeeze a pass in between multiple defenders or put tons of english on an entry pass.  He can finish with both hands when going towards the basket and was eating up all competition during the scrimmages, drawing a ton of fouls.  On Saturday he will obviously be tested going against more physical defenders in DeMarcus Cousins and Renardo Sidney.

A vocal leader on defense with this team, Donotas really wasn't consistently tested in the scrimmages.  His slight frame causes him to rely on his long arms to contest shots and he's susceptible to giving up deep post position because he can be moved easily.  I anticipate he will struggle in the halfcourt game with whomever he is matched up with on Saturday, assuming Team USA ever slows the pace enough to let that happen.  His court awareness is good and he seems to take bad defense from his teammates personally, as he was regularly shouting "Mamadou!!!!!" when his teammate Mamadou Samb (see below) would find himself out of position.

From here on, whenever I see someone out of position or slow to rotate on defense, I will be shouting "Mamadou!!!" I suggest you do the same.

Bottom line: Envisioning Donatas thriving in D'Antoni's system or Nellyball, given his length, agility and offensive skills, is a no-brainer.  His size and understanding of the game guarantee that someone will select him in the 2010 draft lottery. 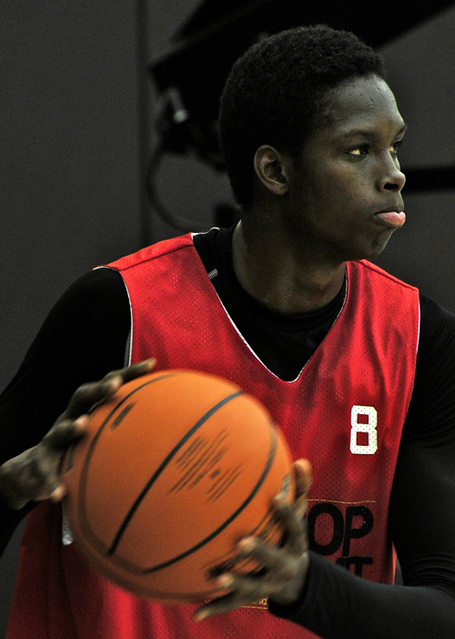 The younger brother of Cheikh Samb, the man made famous by Brandon Roy for all the wrong reasons, Mamadou is shorter than his brother but displays some freakishly athletic gifts, most notably his quick jumping ability.

Rail-thin with a wingspan like a 747, Mamadou gets his buckets mostly by attacking the offensive glass or running out in transition and finishing.  His offensive game during the scrimmages was limited to 8 feet and in, although he looked comfortable with the ball in his hands at the high post or facing the basket from the wings. He just didn't look comfortable enough to shoot it.

On defense, lateral quickness is his biggest liability and I expect that he will get beat on the wings for some spectacular dunks by Team USA.  But he isn't afraid to challenge shots and blocked a few high above the rim on Tuesday night.  Against good competition, I can see him picking up fouls in buckets.  Also, someone will probably posterize him on Saturday.  On the bright side, he attacks the glass hard on almost every possession and put himself in position to grab defensive rebounds consistently.

Bottom line: Enough raw athleticism to force you to keep your eyes peeled; too early to say whether the polish will follow and allow him to see the league. 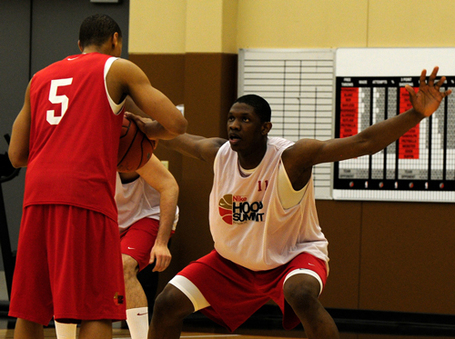 From the first dribble Tuesday night, my favorite player to watch on this team is France's Kevin Seraphin.   He has a legitimate NBA power forward body and plays with rabid intensity on both ends of the floor.

Think a taller, mentally-stable Ron Artest on the defensive end.  He seems like he'd be a natural fit on a team like Utah or Houston, as he embraces the idea of making life difficult for scorers, crashing the boards and tracking down loose balls.  He also seemed particularly adept at reading passing lanes but that might just have been a by-product of some really questionable passing from the opposing point guards.  Either way, his off-ball defense was good from what I saw.

On offense, he has no jumper although he hasn't fully realized that yet.  His range should be Przybilla-esque.  He isn't afraid to shoot in traffic in the paint and he was converting a fair percentage from close in, as he was able to overpower the less-physically-developed competition.  I don't expect him to back down from the physical challenges Team USA will try to throw at him, so it should be entertaining to see what he can do on Saturday.

Bottom line: He will be all over the floor; his body and coordination make an NBA career more likely than not. 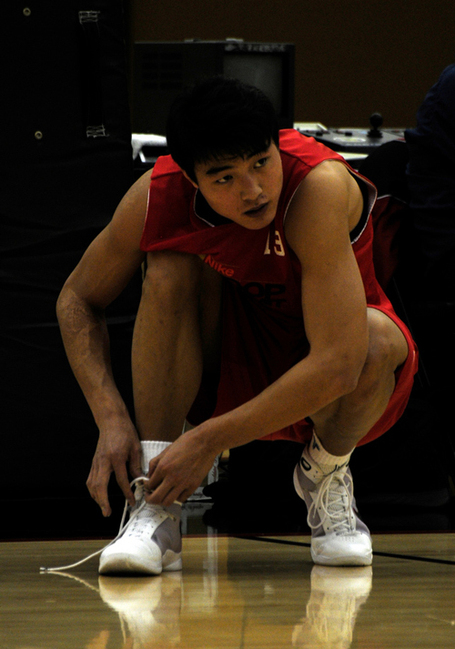 If you're looking for the sheer "gawking" factor, Zhang Dayu is your man.  Standing at more than 7 feet tall, Zhang is one of a kind.  During stoppages of play, he puts his hands on his knees and rotates both knees in a clockwise motion, as if he's spinning a miniature hula hoop.  And, after practice Wednesday, he responded to my simple nod in his direction with a gigantic smile that caused me to bust up laughing, partly because it's so rare to see genuine emotion in a room filled with 30 NBA scouts and partly because he has a very large smile.

His body language exhibited a little bit of culture shock and Zhang requires a translator in the huddle and during practice to receive instructions.  With that said, he acquitted himself nicely on the court all things considered.  Sure, he's a project who has struggled to put up points in his homeland but he plays with a nice energy, isn't afraid to make mistakes (such as airballing a dunk... hey, it happens), and doesn't shy away from contact (although he finds himself on the ground more often than not after a collision).

But this is what international high school basketball is all about.  I'm not sure how many minutes he will see on Saturday but rest assured they will be entertaining.

For more: There's really not that much about him on the internet.  Try this though.

A profile with pictures of Team USA, including the four players who I think would be first round picks this year if the one and done rule didn't exist, will follow later tonight or early tomorrow.