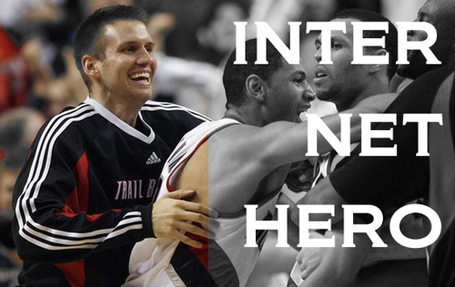 In what can only be described as a monumental moment in Blazers Edge history, "Power Forward of the Future"™ Shavlik Randolph spent most of the 2nd half of last night's NCAA Title game chatting in this powerful fanpost, taking questions from his Memphis hotel room with the help of All-World commenter Lets Blaze.

Already, talk of the conversation -- which is a must-read if only for how organically and naturally it developed -- has caused two tribute threads.

This morning, searching for perspective, I realized that, prior to Shavlik's acquisition, the Blazers had not been to the playoffs since 2002-2003.  In just his first season with the team, he has guided the Blazers straight to the promised land.

There are coincidences and there are causes-and-effects.  This is clearly a case of the latter.  Remember, 15 = 16.  Without Shavlik, the formula would be 14 = 16, which is fuzzy.

Consider this an official salute, Mr. Randolph.  For breaking down every barrier, artificial and otherwise, that stands between NBA players and their fans.  For being cool enough to take questions (appropriate and otherwise) with a smile.  For letting fans know exactly how much they matter to you and your teammates.

So here's the next step.  It's time to go all Jeff Hornacek and add a BE shoutout to your free throw routine.  Here's what I propose: bounce the ball for a warmup dribble, catch it, pretend it's a keyboard, pantomime typing on it, bounce it again for another warmup dribble, then release.  Nothing but net.

Big Michael Ruffin: don't think we've forgotten about you.  Indeed, the whole world is looking in your direction. How can you top this? A live video chat with one of your geckos? A pimp-my-ride tour of the minivan?  Any other ideas?

Shav has set the bar high.