Some good news on the night.  With the end of the season comes our official pronouncement of the Blazersedge Jersey Contest Champion.

All four finalists did a fantastic job, winning jerseys or scoring consistently high during the year and then fighting off hordes of others in sudden-death elimination through the month of April.  However there can be only one champion, the winner of this actual game-worn Rudy Fernandez jersey. 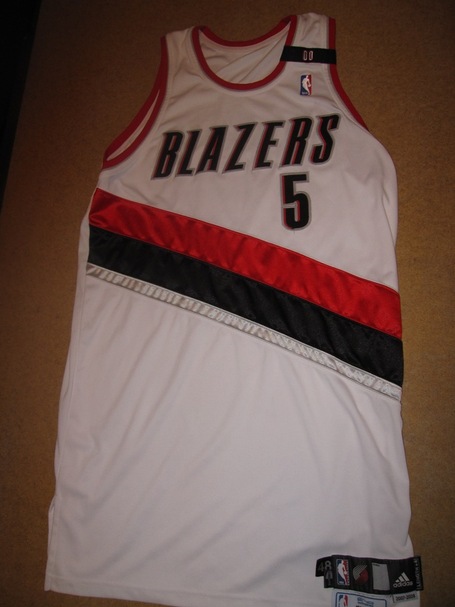 Finishing in fourth place with 6 points tonight and 244 for the finals is FromAfar.  He was evidently QUITE optimistic about a Blazer win so you have to give him credit.

Finishing in third place with 13 points tonight and 249 total was Tweener!  He also went the home team route.

Vaulting into second with 68 points tonight and 276 total was MavetheGreat, a site and contest veteran who knew when to put the pedal to the metal.

And that means our champion and Official Grand Poobah of Prognostication for 2009...the winner of the Rudy Fernandez jersey...the guy who led this finals pretty much from wire to wire:  Sir-1 with 56 points tonight and 323 total for the finals!!!

Congratulations to our finalists, to Sir-1, and to everyone who participated in the contest this year.  We obliterated the number of participants from past seasons.  Thank you all.