Today's Rockets shootaround consisted of Houston reporters attempting to rile up Rockets players using Nate McMillan's comments about the inconsistent officiating (going so far as to bring paper copies of The O to practice.... give me a freaking break...) and Rockets players collectively rolling their eyes at the transparent attempts to incite drama.

The highlight, by far, was watching Yao read the article. 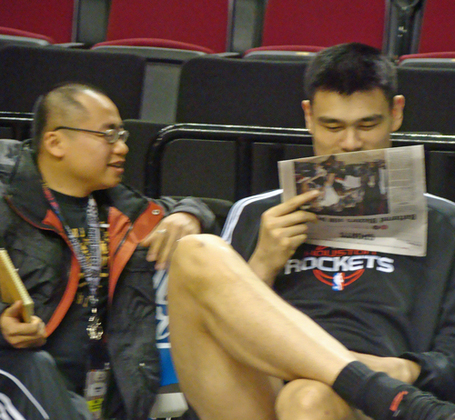 Yao said all the right things about the off-court back-and-forth over the officials: "Coaches try to protect their players and get any advantage they can... I didn't do anything wrong. I would say that if it's a foul, it's a foul."

When asked about Nate's comments, Shane Battier sarcastically stated, "I would love to let [Brandon Roy] get a free lane to the basket every time but I think he's a little too good to let that happen... It's all gamesmanship. It's all angling, trying to get a few more whistles, a few more calls. It means nothing to us. It means absolutely nothing to us. I've been called a lot of things in my life, I've never been called a bully."

Battier then pretended to flex and stated, "All this work in the weight room is finally paying off. I'M A BULLY!!!"

Ron Artest said, "We don't argue about [the calls]... I get hit a lot. I only went to the line not even 10 times this whole series. But [free throws and fouls] are a part of the game."  Artest has been to the line a combined 8 times in the first 4 games.

The Rockets subs spent the open period after shootaround engaged once again in halfcourt shooting contests and impersonating each other's go-to moves.  They are a loose, confident bunch and seem to have the same attitude and approach as they had last week.

Yao, Battier and Artest all dodged questions about what winning tonight would mean to them.  They were taking nothing for granted.

PPS Tom Ziller looks at the fouls and sees some validation for the complaints being made.