Dwight Jaynes let me in on this story this morning, which is interesting, particularly because of how long it took to become public and because it took a blog to break the story.

Ryan White, who claims to be on vacation, wrote a sweet piece about Bill Schonely that didn't hit the internet until after this morning's Full Court Press. Check it out.

The Blazers' backs are against the wall.  Today was potentially their last practice of the 2008 - 2009 season.  I'd like to be able to write that there was an urgency in the air. That the shoe squeaks were more rapid; that the post-session free throws were shot with more care; that Bayless devoured the young with more ferocity than usual.  I can't write that.  Today felt surprisingly normal. Another day, another practice.

Spin that positively, negatively or however you like.  The only noticeable difference today was that practice took place later in the day due to travelling back from Houston.  Otherwise, the guys got their shots up, went through the media rounds and got out of there.

How normal was it?  So normal that this is the face of a man that missed a game-deciding and potentially series-deciding three pointer less than 20 hours earlier. 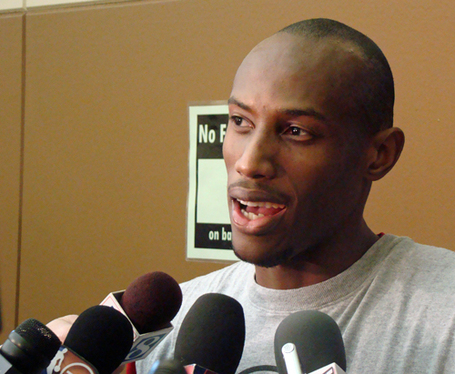 Yeah, it's safe to say that Travis wasn't tripping off his miss.  Shots go in, shots stay out, games are won, games are lost; this team has remained remarkably even-keeled throughout the yearlong journey.  Why stop now?

As I tweeted earlier, Brandon Roy did not practice today.  Neither did LaMarcus Aldridge.  Both are expected to play tomorrow.  Nate did not seem concerned in the slightest about either of them so that should tell you all you need to know.

Here are the reports on each from the team...

Brandon Roy (flu-like symptoms did not practice today and is listed as probable for Tuesday's Game 5 vs. Houston.

Contrary to the jokes that are about to appear in the comments, there has been no substantiation to the rumor that Brandon has swine flu.

Nate went out of his way today to lobby for his guys with regards to the officiating.  The stand out statement was: "we need a consistent whistle."  He also repeated numerous times that if you "check the stat sheet" you will see a disparity that "needs to be addressed."  He pointed specifically to the disparity in calls between Yao and Oden/Przybilla. Nate said that the Blazers had contacted the league with regard to the officiating.

That said, Nate was not overly worked up about the issue.  In some ways, it almost felt like he was making the comments because he felt he had to. That's just one person's read on the situation.  Others might have interpreted things differently.

I do think everyone would agree that that Nate wants to avoid the perception that he is "whining" about the officiating.

In other news, I spoke with Nate briefly today about the contributions from Houston's bench.

Have you been surprised by the contributions from Houston's role players in this series?

What did you think about Lowry and Landry last night?

Landry, Lowry, Von, he goes 3 for 3, their bench has been really good.

Were you frustrated by the string of offensive rebounds that Houston got in the second half last night? It seemed to kill a few really solid defensive possessions.

Part of defense is finishing the play. That is what we needed to do. Some of those balls bounced strange but we've got to get them. We've got to find a way to be in the right place.

I have no idea what to expect tomorrow night. 30 point win; 30 point loss; triple overtime barnburner.  All seem plausible after this afternoon's practice session.