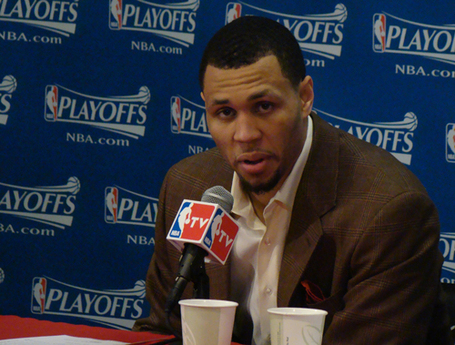 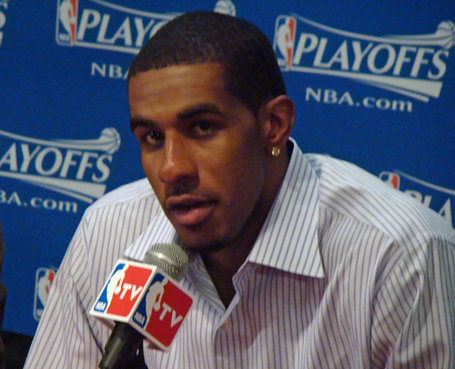 Respect the bling before you call me soft kthx haters

You live in Brandon Roy's city.

Roughly 20 feet from where he did it until we were satisfied against Houston back in November, B. Roy hit a falling down seat-of-his-pants impossible 3 pointer with less than 3 minutes to go to put the Blazers up 6, enough to ensure they didn't choke the game away held on for a 107 to 103 home victory over the Houston Rockets.

The 3 was the crown jewel of Brandon's 42 point, 7 rebound performance, a night that from the beginning had "Brandon will will this team to victory" written all over it. In just his second career playoff game, Brandon entered the pantheon by tying for second most points scored in a playoff game in franchise history.  And he did it with Ron Artest and Shane Battier all over him.

After the game, the team was happier than we've seen in a week. Were they relieved?  Absolutely.

And was there a sense that this was what was supposed to happen on Saturday?  I would say yes.

So when those things didn't happen on Saturday, there was a lot of confusion. Amongst the team and amongst its observers.

But when things started clicking tonight it felt like order had been restored.  All the bull--- about who is cheering or jeering too loudly evaporated in the wake of one man's developing greatness.

I'm glad I was there to see it.  I'd call myself a witness but I'm pretty sure that phrase is copyrighted. 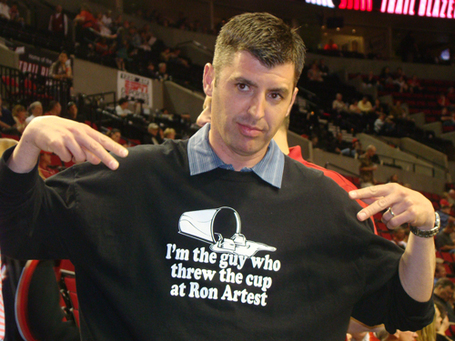 Nate's Postgame Comments
On whether this was Brandon's best game ever: "I would say [in the] playoffs. I thought tonight he played a really good game. In the sense that I dont think anything was forced. Artest is an unbelievable defender. He did a good job of just taking the looks that were there. He knocked down some big shots. No turnovers. He had the ball a lot. We tried to move him around a little bit more. Just a solid game by him. Artest is unbelievable, on the offensive end of the floor I thought Brandon stayed calm against the defense of Artest and Battier."
On the games from Brandon and LMA: "Well we needed those guys to score. Brandon had a tough shooting night last game. So did LaMarcus. If those two guys are not scoring for us it's going to be tough for us to win games. Not only do we need them to score we need some of our other guys to score. We need that third guy. I thought Rudy and Blake and those guys did a nice job of knocking down some shots.  But Brandon and LaMarcus had a good rhythm tonight and we needed those guys to score to get that confidence.  Our guys certainly gained confidence when LaMarcus and Brandon were scoring."
On the defense: "I thought defensively. Defensively just establishing that we could guard them. Artest started out really hot. A lot of those shots were tough shots, hands in his face and for the most part we contained the other guys. In the second half, Von started to get off a little bit.  But we pretty much kept that first group under control, they didn't run away from us as they did in that first game."
On evening the series: "I think it's good. We've got to believe we can win. If we go in there doubting ourselves we lose before we even take the floor. After that first game, basically the last two days were about getting this team to believe that we can do it.  As I said it was encouraging to look at that tape, even though they blew us out, we looked at that tape and said that was not the gameplan. We didn't do anything that we talked about doing in that game. I feel we have a shot. I think the teams are really evenly matched and I felt like we had a shot and we showed them things of what we looked like yesterday in practice and I thought today we did a better job defending. We got in foul trouble early in two of the quarters and they were in the penalty but we were aggressive on both ends of the floor."
On the inside game: "I just thought we got more movement. They are a very good defensive team. They do a good job on the ball. They do a good job off the ball. We needed more movement in our offense. I thought we got more movement tonight. We weren't standing and ball-watching Brandon and LaMarcus when they had the ball tonight. A lot more screens to free up our guys."
--------------------

Thanks to Mike Acker for manning the digital recorder to grab these for you.
-- Ben (benjamin.golliver@gmail.com)