It was a humbling experience being in the same gyms as 2 of the top 4 NBA coaches in the same morning.

Rick Adelman, chest and back hair protruding from his sweat suit, gold chain hanging, took this morning's news that Mike Brown was Coach of the Year in stride. Coach Adelman got jokes.  Namely, "I always say if Jerry Sloan hasn't won it there's something wrong with that award."

Adelman went street corner wistful philosopher on the media for a moment, "I'm coaching in the highest league you can coach in. I've been doing it for 18 years. Never in my wildest dreams [did I think I would be here]... I thought I'd be at a community college or a small college my whole life." But, he was careful to note on mulitple occasions, "Attention is just not something I need [as a coach]."

Adelman briefly traced his ego-free approach to managing his teams back to his days as a player: "I never liked playing for a guy that seemed like he was in there with an ego or ripping you for no reason. You need to treat everyone differently and they will respond to you. I've seen guys lose their jobs because they were so rigid.  It made no sense to me.  That's not healthy."

Adelman's approach was evident in all of his players this morning.  The Rockets again appeared as a loose bunch, engaging in various competitions as they waited for the media availability period to pass.  Pictured below is Von Wafer nailing a lefty pull-up runner; just moments before, he threw down a lefty reverse dunk that impressed both his teammates and the assembled cameramen.

The Rockets are confident and care-free. 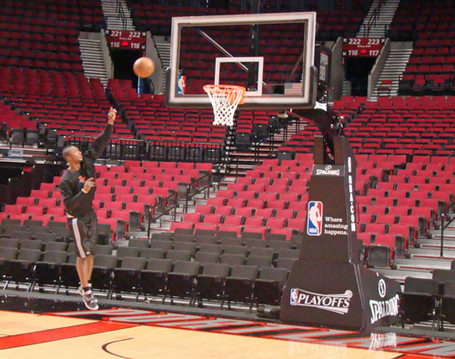 Their media star was Ron Artest, who recounted his first playoff experience with a wry smile on his face, "My first time in the playoffs, I didn't play great at all. I was in Indiana, I was nervous, I didn't know what I was doing. I was tired, gave in to fatigue.  Just like everybody, well, not Derrick Rose, he had 36 points in his first year in the league, I don't know how he did that." 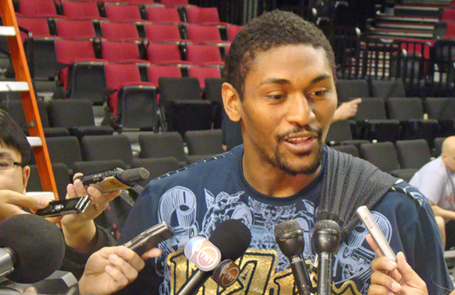 Does Portland still present a challenge to the Rockets?  In Ron Ron's eyes, absolutely, "It's like poker as long as you have chips, you're still in it."

Perhaps the line of the day was Ron's quip, "As players we just want to play. We don't really care about scouting reports."

Go ahead and add that to the list of things I've not heard said by a Blazer this year.

Nate McMillan also took the news of his Coach of the Year success in stride but, given the stakes tomorrow night for his Blazers, he didn't allow himself the philosophical tangent that we heard from Adelman.  Nate said simply, "My vote was for Mike to win it" and "as far as me being fourth, I'm alright with that."  He also complimented Coach Adelman by saying, "Rick is proven. He's been a good coach for a long time and he's won everywhere he's been."

In the context of Saturday's aftermath, it's not surprising that Nate was more willing to talk about what adjustments the team would be making rather than how he fared in the Coach of the Year rankings.  Nate pointed to adding "movement to the offense" as a key tomorrow night and challenged his players to bring a stronger mental toughness to the game, "One thing we've got to do is compete... We know we can play better than we played and we know we've got to play better."

Brandon expected the team to present more defensive looks for Yao Ming, stating that the team would mix things up, playing LaMarcus on him, doubling down when Greg or Joel was on him, and generally trying to keep Yao off balance.   Adelman actually made the comment this morning that, "I don't know who can play [Yao] one on one consistently. He's a very, very tough cover. I think they are just trying to find out what works."  Those words kept repeating in my head as Brandon and Nate described how to stop the 7'6" giant.

I'm not sure they've found out what will work yet.

Brandon also opened up today about what appeared to be bothering him on Saturday night and, to a lesser degree, at practice yesterday.  He stated, "Our guys were a little nervous. A little star struck by the playoff thing... We played like a soft, young team... we didn't play aggressive. We didn't play loose. We almost played like a team that was afraid.."

As for tomorrow night, Brandon said, "It's going to be physical. It's going to be some hits. I'm just ready to go... Must win. Big game. Whatever you want to call it, it is what it is."

Perhaps the most interesting comments from Brandon today concerned his impressions of LaMarcus: "I think he played into the whole playoff thing, the whole playoff hype. He looks like he's more focused now. If I know LaMarcus, he can't wait to respond."

Brandon and LaMarcus seemed like polar opposites on the court Saturday and with their reactions at practice yesterday, so it was particularly interesting to hear Brandon apparently admit that he thinks LaMarcus might have been swept up.

Of course, Brandon isn't your run of the mill 3rd year player.