I've got to hand it to you guys, you're on a roll.

First, you made Phoenix Stan at Bright Side of the Sun quake in his boots on a podcast. Second, Blogfather put out the call and you single-handedly swung a nationwide ESPN poll by 15 percent, casting thousands upon thousands of votes.  Third, you received thanks from the daughter of an NBA Coach for helping to set record traffic on her website. (And If you want to go a little further back, let's not forget the memorable win in Yahoo!'s 2 on 2 bracket).

But I think today takes the cake.  Because this morning, owing solely to the power and passion of the Blazers Edge Army, there is a young man sitting at a computer in Oklahoma, crafting tribute art in your honor.  I am not making this up.  Go see for yourself.

You are probably going to want to download that wallpaper as a keepsake.  This is bragging rights for the next 20 years forever.

So here's the plan... I submitted his story to Ballhype.  And I've been meaning to organize a Ballhype takeover for awhile.

Your instructions, if you choose to accept them (which you will)... 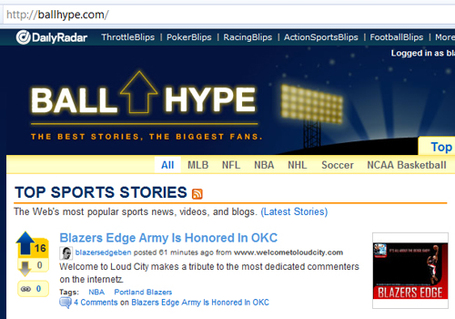