One sign that it might be an important practice: the entire braintrust shows up.  As the team cooled down with free throws this afternoon, Nate McMillan met with (left to right) KP, Chad Buchanan, Tom Penn and Mike Born.  The bug I installed inside the hood of Mr. Born's sweatshirt malfunctioned, so unfortunately I am not able to bring you the content of their conversation.  It seemed light-hearted and probably did not involve reading aloud comments from Oregonlive. 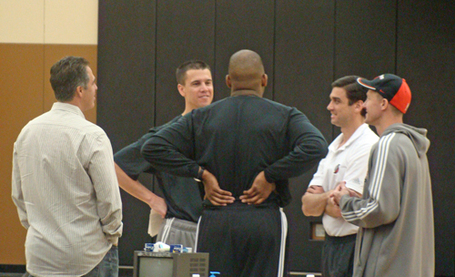 The mood at practice was not particularly light or heavy -- there seemed to be a balance but also a certain tension or urgency in the air.

Nate purposefully skipped film session today to get the guys out on the court playing rather than thinking about what went wrong in Game 1.  Given the hesitancy and timidity expressed on the court last night, particularly early in the game, it's hard to argue with that decision. 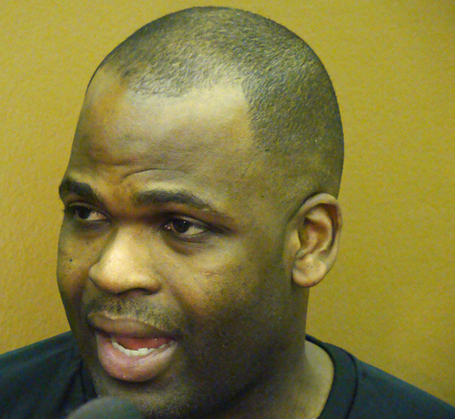 Nate's best line today was, "I have never seen a pretty battle or a pretty fight so, no, I don't expect [this series] to be pretty... It's not about style points."
Last night I rhetorically asked, "Where did last week's Blazers disappear to?"  It was my impression today that Nate isn't going to waste time looking for those Blazers.  He's focused on forming a rough-and-tumble, grind-it-out mentality that can match Houston's intensity.

Nate admitted to having a hard time sleeping last night but said he has trouble sleeping after just about every loss. 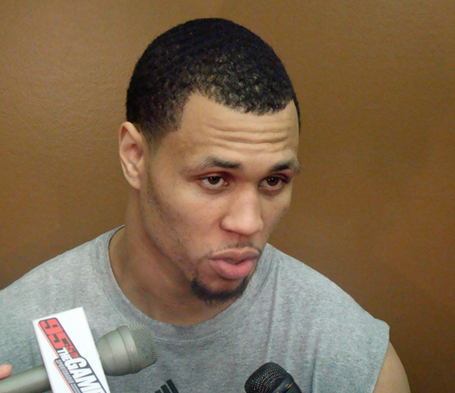 Brandon was very serious and focused today but he was far more upbeat than he was last night.  Indeed, I'm not sure I fully got across Brandon's appearance after Game 1. On a normal night, Brandon moves around off the court like he does on the court: not in a hurry, entirely at ease, full of confidence.  Last night his eyes were focused on the ground, his movements laborious, his tone flat, his shoulders slumped.  It was a different Brandon.

His most assertive declaration today was: "I'm calling [game 2] a must win." I think we would all agree on that but it was re-assuring hearing those words coming from the mouth of the team leader.  He was more or less back to his usual self, even cracking a few jokes as the media session went on.  He got a good laugh out of everyone when he admitted to staying up late last night watching episodes of "College Hill" on BET because he couldn't sleep.

LaMarcus's session was lighter.  Curiously, in contrast to both Brandon and Coach McMillan, LMA said that he had no problem going to sleep last night and that he had moved on to thinking about Game 2 as soon as Game 1 was over.  I say "curiously" because this approach seemed exceptional as members of the media (myself included), team employees and his fellow teammates seemed to take longer to process exactly what happened in Game 1.

It was illuminating to see how two talented players that share as much in common as Brandon and LaMarcus reacting so differently to the same situation.  Given LaMarcus's subpar performance Game 1 performance, I think his Coach and teammates are probably glad he's not dwelling on it.

More than anyone else on the team, I think that those in the Practice Facility  today are rooting for LaMarcus, both because the team needs him and because of what a solid playoff performance would mean for his future development.

This Will Probably Cause Drama

Randomly I caught a Wells Fargo gift package that was dropped from the rafters on Saturday night.  I tried to John Wall pass the package to a (roughly) 10 year old kid in front of me.  The gentleman pictured below had a different idea and went CP3 by swiping the gift package (estimated retail value: seven pennies) and refusing to give it to the kid, despite much heckling from those nearby.

Thanks to the many fine twitter folk who encouraged me to get a picture of him, I present this evidence. Can we blame this gentleman for the game 1 loss?  Probably.

Does he deserve to wear that shirt? No. 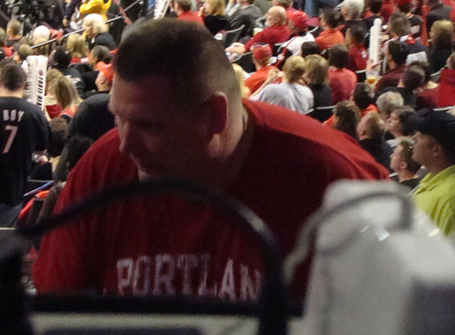 Please do not steal from children. That is weak like watering down your egg roll sauce because of the recession. Chinese restaurants: you're on notice too.