David Stern swung by the media room pregame to make generous statements about Portland.  He took questions about why Portland hasn't been selected to host an All Star Game (not enough grade a hotels in a centralized location), the league's financial outlook (better than AIG and Bear Sterns!) and more.  I snapped a head shot so you can photoshop funny thought bubbles coming out of his mouth to make yourself feel better about last night's result.

For more on Stern's statements, check out Mike Tokito's piece. 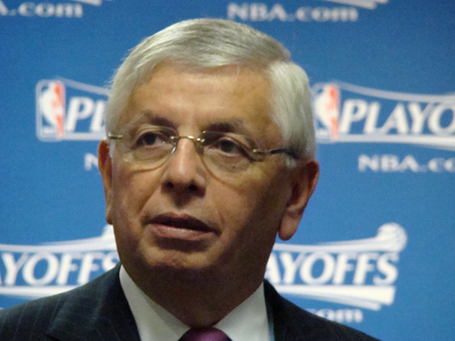 Sorry for the delay on these. Last night, you know, sucked.

Are you shocked by the result? ... "They came out and jumped right on us. We got on our heels after they made their first few shots, they were the aggressive team throughout the game.  We didn't get any stops early. I thought that was a shock to our guys. We needed to get closer and I thought we got a little hesitant in everything that we were doing, as far as what we wanted to do defensively, in guarding them. Offensively, baskets, even though we were scoring those baskets were coming hard. We weren't getting anything easy going to the basket.  I thought when we did miss shots we thought about it, we took that back down on the defensive end of the floor. It wasn't one guy that was hurting us, that whole first unit had a night tonight."

Were you looking to attack Yao on offense? ... "Well you want to get movement. We wanted to establish the low post, go through LaMarcus, what we've been doing all season long. They did a nice job of getting him off the block, he didn't get anything early. An option is to put Yao in pick and rolls and try to spread the floor and again Brandon hit some shots but they all were tough shots, they were contested shots, we didn't get anything going to the rim. We had only 16 free throws. I would say the first two quarters we only had one foul late in those quarters so we weren't getting to the free throw line and getting easy baskets."

Are the Rockets that good or did you make them look that good? ... "No, that's a good team. They were good today. We were bad but it's a good team, you know that they're a good team. They're good on both ends of the floor. It's not one end of the floor, they've been a solid defensive team, offensively it's a pretty simple gameplan, you spread the floor, you let Brooks attack and if they have deep post position they go inside to their bigs. Yao was just... he didn't miss all game long. To get them started, to get that type of rhythm early, they had confidence, I thought defensively they got even more aggressive. I thought we fell back on our heels."

What was your message to the team? "Well, it's two seasons. The regular season is over. Now it's postseason. We lost our first game of the season this year. It's a four game series -- they have to win four.  We'll go back to work tomorrow and make some adjustments and get ready for Tuesday."

Was this a reality check for a young team? ... "It's a bad night. We lost. Regardless of how you lost, you lost a game. A team will win and a team will lose. We have to go back and make some adjustments off of what happened tonight and play a much better basketball game on Tuesday."

Thoughts on Aaron Brooks ... "The speed. Being able to control the ball was a problem all night long for us, not only on the perimeter, but allowing easy entrances into the post to Yao and some of their other guys, Artest on the perimeter, we didn't control the ball at all tonight. Brooks pretty much had his way getting to the basket as well as shooting perimeter shots, so did Artest, so those guys we had no control of the ball and when you don't have control of the ball on the perimeter, things like that are going to happen, everybody is open, everybody was open tonight."

Thoughts on Tuesday ... "We going to need our best shot on Tuesday. It's a disappointing loss but we have to go to the film tomorrow, look at what we looked like tonight and make some adjustments.  We've got 2 days to get ourselves ready for Tuesday's game. They are going to come out, if possible, even more aggressive to get game 2.  To try to finish this thing up going back to Houston.  It's an important game that we need to get on Tuesday."

How much was inexperience a factor tonight? ... "They came out ready to go.  Youth is a part of it. It's who we are. For our guys the first time, as I mentioned to them, we have to put this behind us. I wanted to know what they felt like out there, what were they feeling, during the course of the game what were we thinking? Were we intimidated? The thing is we put this behind us, we found out what we need to do and try to do it better on Tuesday."

As a special playoffs bonus, here are some audio clips for you to download.

You can either shift+click on the links below to load the files in your browser or "Right click and save link as" to download the mp3.

Note: Nate's pregame statements might be difficult to here... the rest should be ok.  If you have issues with the audio, don't freak out... just leave a comment and I'll work through it for next game. Thanks in advance.

-------------------
Programming Note
The Blazers are practicing this morning and there will be a practice report coming sometime this afternoon.
-- Ben (benjamin.golliver@gmail.com)