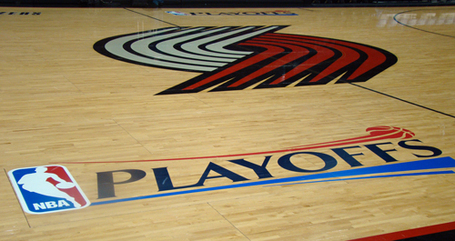 You're sitting around all day geeking out for this game aren't you?  Make sure you have a defibrillator handy.  These pictures from the Rockets' Rose Garden shootaround this morning have the potential to cause seizures, heart attacks, and [you know whats] that last longer than 4 hours. 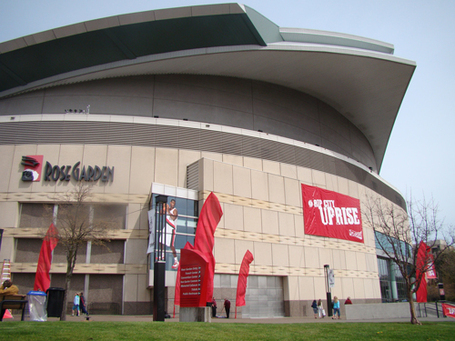 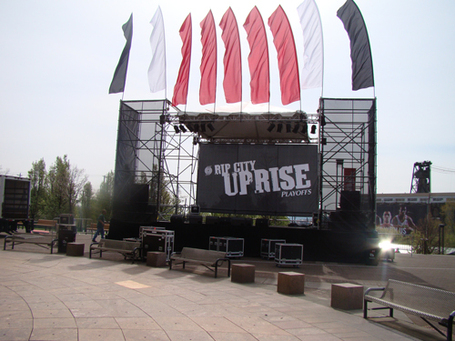 This stage was being setup near the fountain. More sweet signage.
CLICK THROUGH FOR ROCKETS SHOOTAROUND RECAP.
-- Ben (benjamin.golliver@gmail.com)

I was very impressed with the mood around the Rockets.  The first takeaway impression from this group is that it's no surprise they bumped Aaron Brooks into the starting role: his energy is infectious, really overflowing his older teammates, as he is very loose, calm, confident and goofy.  He is shockingly comfortable for being such a young point guard.

He was the center of attention during the post-shootaround halfcourt shot contest (Chuck Hayes nailed a halfcourt shot all net on his first attempt, by the way... impressive stuff) as he shimmied around the court, slapping hands with coaches, teammates and pretty much everyone else present. 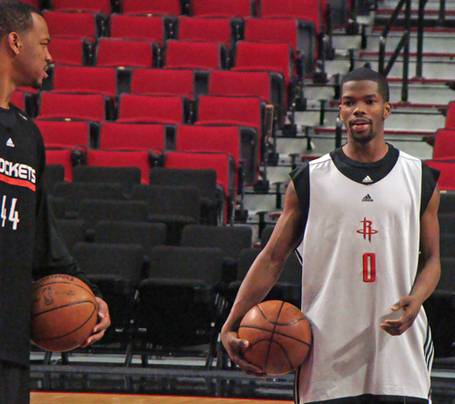 After watching him for less than 5 minutes it was clear why so many people in Houston see Brooks as the X factor.

The Rockets group in general seems like a happy, fun-loving bunch.  They swung by the media room to watch the end of the Bulls vs. Celtics game and were cracking lighthearted jokes and providing impromptu commentary down the stretch.  It was a surreal experience watching Joey Dorsey watch his former teammate Derrick Rose light up Boston.

The Rockets' team bus had to leave to return to the hotel with about 30 seconds to go in overtime and the team groaned loudly in unison.  Funny stuff.

Ron Artest's knees were covered in ice and he looked lower-energy than I expected.  Hey, it was early in the day.  Yao,also, was surrounded by Chinese reporters and he looked ready to be done with the fuss and start the basketball.

Apropos of nothing, it's strange to see Von Wafer in the Rose Garden corridors.  What a difference a year makes.

One major change for the playoffs is the postgame press table set up that accomodates coaches and the teams' star players.  Here's a shot. 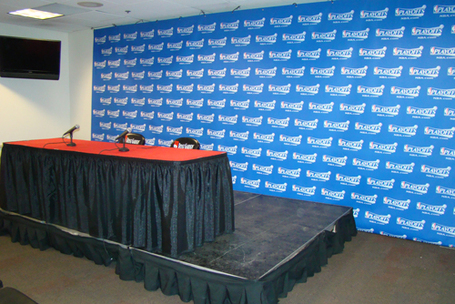 During the regular season, this area features long cafeteria-style tables where Kevin Pelton types on his computer throughout dinner and I harrass him with questions like, "can you please fundamentally redesign the box score?" and he says, "later, Ben, later."

I'll be heading back down to the Rose Garden in a few hours.  If there's anything in particular you'd like to see today, please leave a note in the comments.

This is my first time at the rodeo, so we'll play it by ear.

And, yes, I must confess just like Dave, I am pure hyphy right now.

Call/Text/Pix the bat phone with your thoughts before, during and after the game!