This afternoon I asked a not-quite-interested Nate McMillan a few questions at the Practice Facility.  With the team's police escorts waiting patiently for the team to assemble nearby, here's what Nate had to say.

We're happy where we are, with what we've done and accomplished this year. It's really not over for us. The new season starts. This is part of the plan from the start, to get to post-season and now have an opportunity to play for a championship, and that's what's its all about. The direction of this organization, we keep going in the right direction.

What's the mood among the team like this morning?

They've been pretty good. We came in today and started to prepare for Houston, watching film, nothing on the floor. Really a light day today. Tomorrow we'll do some things on the floor.

Did you know that hundreds of people camped out last night for tickets?

I saw something about that. Well, I'm sure it's going to be hard to get a ticket, so you gotta do what you've gotta do.

Coach McMillan answered that last one with a big smile on his face and a shake of his head.

I realize that those were not the most revealing answers. Nate was on a mission to board a bus, be done with the media, and make his MLKesque speech in front of thousands of Blazers fans at the team's afternoon rally.

I had a great time during the brief time I was at the rally today. It was cool meeting some of y'all for the first time and always nice to see familiar faces.

Travis got a lot of laughs when he took the mic to triple-negatively spout, "I ain't never seen nothin like this."  Indeed.

Rudy declared "we gon weeeeen dee playoffs!!!!!" Judging by the cheers today, he might have surpassed B. Roy as the city's favorite son.

Brandon did receive chants of M-V-P and stated, almost in awe, "I can only imagine what a championship will bring."  Makes it sound like a foregone conclusion, right?

Soon after, LaMarcus Aldridge caused two 20s-ish women near me to shake their arms like they were extras in a Borat movie, before looking right at me to declare, "Aldridge, he's so fine!!!!"  Do you, ladies, do you.

Nate then closed the ceremony on a serious note, asking the crowd to chant  "we love you, Luke" for Maurice Lucas.  The crowd response was overwhelming.

Alright, enough with my 3-hours-of-sleep-last-night bleary eyed prose, let's get to the pictures...

This just came into my email, courtesy of Michael Tillery of the Portland Observer. 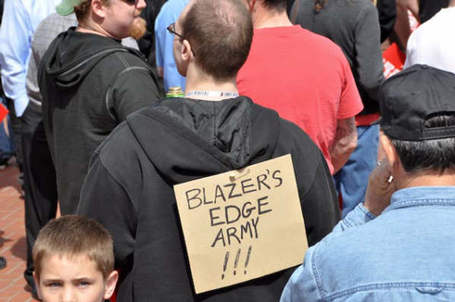 It looks like the #1 representer of the BE Army is none other than Tony. I salute you, sir, and am sad I didn't see you in person.

Pictures from the rally are just overflowing twitter.  Here are some faves...

And here's a longer recap of the rally that made USA Today.