When the Portland Trail Blazers closed the door on the 2008-2009 regular season, and closed the door on years of hitting the links in mid-April, I found myself in a dark tunnel, looking over the shoulder of a bubbly trail cat, watching as players, coaches, and spouses made the short, joyous walk to the team's locker room. 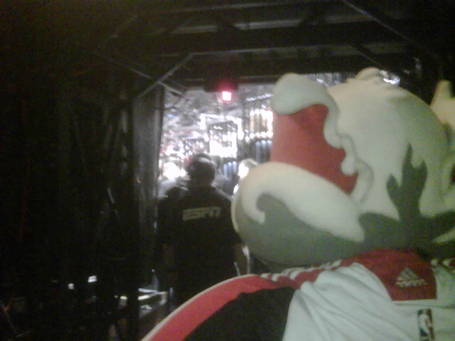 The view wasn't perfect but you couldn't beat the ambiance. Thousands celebrating a milestone. Ain't no place I'd rather be.

The game was an afterthought tonight, particularly for the Denver Nuggets. The story was the release, the relatively quiet, business-as-usual culmination of, literally, years of waiting and waiting and waiting.  Once it was done, there were smiles and handshakes and the sound of Young Jeezy, but there were no beer baths or even backslaps.

Just talk of the impending "second season."  Just a focus on competing to win an NBA title.

If there's a hotter team in the NBA right now, I'd like to see them.  Because this team is hot as hell and it's fun to watch.

Tonight was, among other things, a redemption song for Channing Frye and Sergio Rodriguez, perhaps the two most-maligned Blazers, each who came to life in ways the crowd hasn't seen all season. Frye looked like he belonged on the court.  It was mind-blowing.  Sergio looked like he was about to jump out of the gym, ricocheting off his teammates' chests during spontaneous pre-timeout celebrations. And the deke he put on Birdman after getting his shot blocked on the previous possession was magical.

Nic Batum harassed and confounded Carmelo Anthony, Joel cleaned the glass and everyone else did what we've seen time and again over the last 6 months. They filled their roles.  They won at home.

But, again, the scene wasn't the game. It was the fan appreciation post-game ceremony, Brandon Roy cradling his child in his arms.  It was Nate smiling, and then catching himself, and re-focusing on the next goal. It was Travis Outlaw, still in game uniform, patrolling the back hallway, ice packs on his knees, receiving well-wishes.  It was celebratory root beer floats at halftime in the press room (seriously).  It was The Oregonian staff watching a late deadline pass, and laughing about it for once.  It was a discussion about semi-circles, and how 21st century media members naturally arrange themselves around star athletes like witnesses to Ancient Greek performances. It was time to give in and embrace the wave, as 100 level fans rose in unison in the background of an ESPN broadcast, letting it all hang out in the seats that go unoccupied in so many other arenas around the league. It was Rudy Fernandez breaking Kerry Kittles' record for most 3 pointers in a season by a rookie -- and doing it with 2 ankle socks. It was Brandon effing Roy continuing to play the underdog card after the game.

It was so much different than the end of last season.

The 82nd game last season felt like the last day of school before the summer.

Tonight felt like the day you open the mail and receive an acceptance letter to your dream school: the University of Playoffs.

Nate on his big smile: "Yeah, just happy for this group of guys. They've worked hard all season long. From the start to the finish. And co-champions of the division.  Just an unbelievable season by the guys and we're trying to get them be pumped up and they are excited but I think they are ready to move on to the next season and we get that opportunity. Just really happy and proud of the effort that we've gotten from this group this year."

Nate on the result: "Well, you know, we were playing for a lot of things, to be co-champions, and home court advantage, and just keeping our rhythm. Our guys came out, our bench was unbelievable again tonight. We needed both units to play well all season and when our bench is playing like that, I thought the first unit played ok tonight but the bench came in and gave us a lift and basically took control of that game. It's hard to beat us. And now we get ready for the most important part of the season."

Nate on whether or not other teams want to face them: "We don't care. I really don't care. I know in the playoffs anything can happen and I've been a part of a number of different situations as a player and as a coach and you've got to get there. We're not just happy with making the playoffs, now it's a new season. It's an opportunity for us to play for a championship. That's what we are playing for. We've got to win 4 games in this first round to advance. Our focus is the same. Take it one game at a time and try to win 4 games as quick as possible.

Nate on Houston: "Tough team. Tough team. We've had some success against them but they are a tough team with Yao in the post and Artest and Battier defending. I feel confident in our guys and we start at home. That doesn't guarantee anything, we have to continue to take advantage of home court. I think it should be a good series."

Nate on his message postgame: "Congratulations first. They've had an unbelievable season. This cannot be taken away from them regardless of what happens. An unbelievable season. The second season will start this weekend. We are in it to try and win it. We have that opportunity. We are pretty healthy going into the playoffs. We get home court advantage. A lot of good things have happened this season but the second season starts this weekend."

More Nate on Houston: "They've got a very good team. Yao is a tough matchup. Artest. Tracy when he was there. Defensively they are really solid. They have a good bench. They play both ends of the floor well. Not just a good defensive team. They can score. They've been a pretty tough matchup but I think it will be a good series."

Nate on Aaron Brooks' comments about matching up well with the Blazes: "I've said all along, I think most teams want to face us. That's ok. You get who you get. We got Houston. A very good team. It's going to be tough. But our guys have played hard, they've played the right way all season long. When you do that and you give yourself to win games and they have."

Nate on how Houston might compare to other potential playoff opponents: "We have Houston. That's who we are facing. So what teams match up well, it doesn't make a difference. That's who we are facing. We're confident that we can win. And I'm sure they are. It's a new season. Anything can happen. You have to throw the regular season out the window once you get to this point. It's a different season. It's a seven game series."

Nate on his feelings tonight: "This is what I envisioned when I came here and took the job. To rebuild this organization and to bring the respect and that pride back to this team. And to have success here and give the community, give Oregon, give Portland something they can be proud of. Try and bring that tradition back and to win it this year. We do this in 4 years, it's a great accomplishment. From everybody. Starting with Mr. Allen and going into our front office, Kevin, Larry, his guys, our coaching staff has been great, and our players, the potential that we thought they had, they showed it. I think it's the start. This is what we wanted to do and this was our dream and we're still living it. The next step, I think, is to continue to build and establish ourselves as a top organization as well as team and eventually try and win a title."

Nate on whether this is the same Portland team that squeaked by Houston on a Brandon Roy miracle 3: "I think they've certainly grown. They're more confident. They've matured. They're still a young group. They've matured over the season. They definitely have a better feel for what it takes for them as a team and as players to win in this league. So yes, they've grown."

Nate on his deep bench tonight: "You have Frye. That was the group that I felt could come together and I was hoping would come together and for most of the season we've gone with Travis there. Due to injury and Joel playing well, Greg is in that rotation, but having Frye out on the floor with Travis, Rudy, Sergio and a big, whether it's Joel or Greg, I felt that unit could be a good unit. And tonight it was a good unit, with Greg and Frye out there." 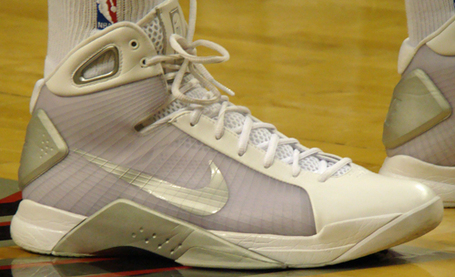 Linus Kleiza. The next 3, sorry, I know you will complain that I didn't caption them, my life got thrown off-kilter by the last 2 pictures... 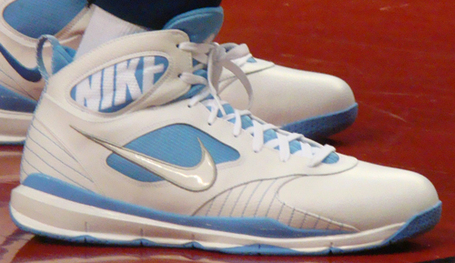 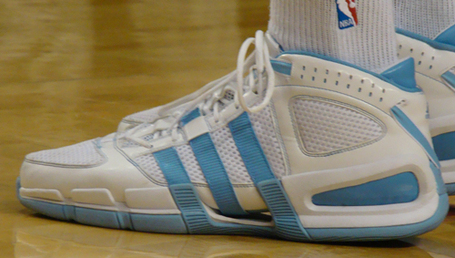 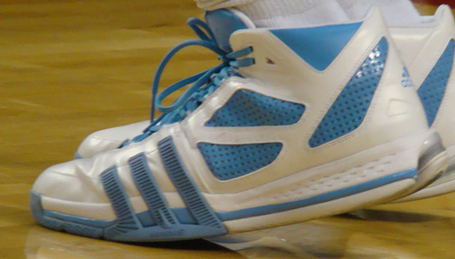 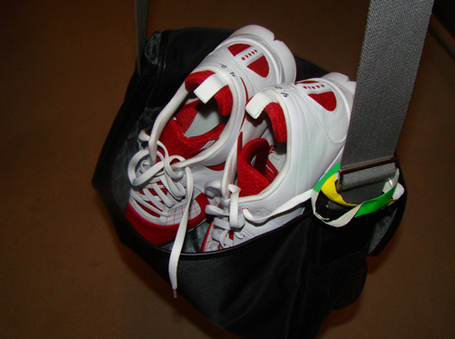 Single greatest kix pix in the history of this website. Shavlik Randolph. Making today pretty much the single greatest day of my life. 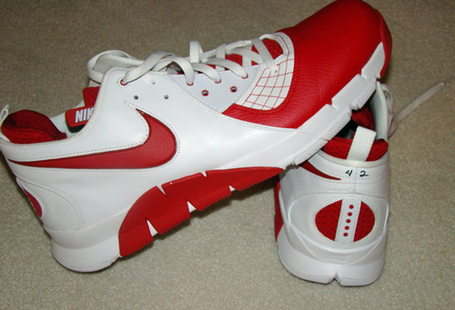 Another look at Shav's sweet red Nikes.  Shavlik, you truly are an Internet Hero. I salute you. Dr. C and Cory: you also deserve big-time salutes.