Nate: "If I Have to Pull an All Nighter, I Will"

Share All sharing options for: Nate: "If I Have to Pull an All Nighter, I Will" 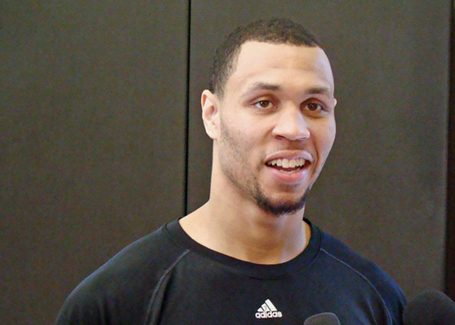 Last year's regular season ended with a whimper: Jarrett Jack dressed up like Will Smith for no apparent reason and that was that.  This year, life for the team is starting to get hectic, particularly for the Blazers' coaching staff.

In no particular order, here are some of the things that are on Nate's plate today:

I spent a fair amount of time this morning trying to wrap my head around how wild the next week will be.  The closest, easiest comparison is to finals period during college but that's pretty much a joke because 20,000 people don't cheer as you hurriedly type up 20 page papers while chomping on blue pills and there are no post-test press conferences where you have to explain why you went the way you did on multiple choice question #36.
In theory, this should be as high-stress a time for the Blazers since I've been around them.  I assumed that for someone as detail-oriented and goal-oriented as Nate McMillan, all the uncertainty would be driving him crazy.  So my brief chat with Coach today centered on what life is going to be like off-the-court in the next 72-96 hours.
When asked if his schedule over the next few days was about to change dramatically, Nate just started laughing, as if giving in to something out of his control.
The main change, he noted, would be in videotape preparation, and there was a gleam in his eye as he thought about sitting in a dark room watching tape on the same team for hours and hours on end.  "The focus is really on one team and really just learning that team inside out.  I mean as best you can.  It really becomes easier in a sense. I shouldn't say easier. But [it's nice to be] only focusing on one team for about a week."
If Coach McMillan was stressed or feeling the pressure, it wasn't visible.  His vibe today mirrored the team's: calm and confident.  Dressed in all black from head to toe, he had the "happiest vampire in the world" swag going.
Surprised, I asked, "You are starting to feel the clock ticking, right?"
"[It depends in part on when you play] the first game. If you play Saturday, yes, it will be a crash course.  If you play Sunday it gives you more time..."
At this point he trailed off, paused and then nodded before declaring: "We'll get it done."
But does that mean sacrificing sleep altogether on Thursday and/or Friday night?  "I think you just do what you need to do. If I have to pull an all nighter, I will. And [then] do what I've been doing all season, get your rest when you can because that is important too. "
As we used to say five floors below the Earth's crust on D-Level of the Milton S. Eisenhower library: "Hardcore."
-----------------------------------------------------

Playoff Tickets
Rumor has it that Nate is not the only one pulling all-nighters: I've heard from a few people who plan to camp out by the Rose Quarter ticket office to ensure they receive playoff tickets.  If any of you guys go through with that, please hit me up on Twitter.
Important update...
This just in via email...

Ticket services says that people will not be allowed to camp out in the Rose Quarter overnight. Security will be there to kick people out. People will be allowed to line up for tickets starting at 6 AM Thursday morning.

Nicky Barnes did not practice today and was not at the facility. He is meeting with the medical staff this afternoon. He is now considered a game-time decision for tomorrow night.  Nate wouldn't lean one way or the other.
Most of the players and coaches stampeded out of the brief practice this morning and only Brandon, LaMarcus and Steve Blake made themselves available for comment.
So not much to report other than to say the guys were loosey-goosey today and looking quite confident.
I wouldn't bet against them tomorrow night, let's put it that way.
-----------------------------------------------------
"Please summarize your feelings towards lame comments on the internet." 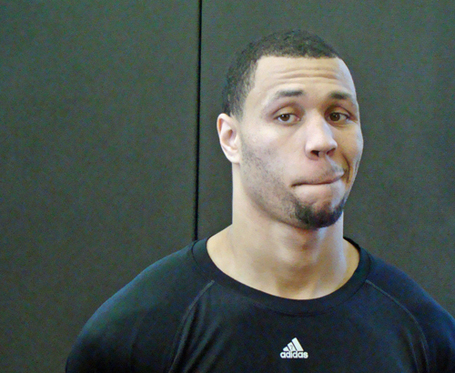 I forget what actually prompted this face.