I should have planned ahead and left one in the chamber.  When I wrote that Memphis report I clearly wasn't thinking; I needed to save the super-sarcastic-mocking-of-opponent's-desire-and-abilities template for tonight, just in case.

So what "decided" the outcome of this "contest?"  "Oklahoma City" didn't bother to play any "defense," allowing "dunk" after "dunk" after "dunk" against a far superior opponent.  The "Thunder's" "stars", Kevin Durant, Russell Westbrook and Jeff Green, combined to "hit" 12 of 38 "shots."  Earl Watson "managed" 5 turnovers in just 25 minutes and "Robert Swift" (despite "rampant cheering" from Kevin Pelton) did whatever the "exact opposite of controlling the paint" is.

Travis Outlaw "overcame" the Thunder's "perimeter defense" to lead the Blazers with 21 points.  Brandon Roy "walked straight to the hoop" for "easy buckets" on multiple occasions and then "sat down and cheered on his teammates for 3 and a half hours." Greg Oden displayed "cathartic aggression" by dunking over "anyone, everyone and no one" on multiple occasions.  "Michael Ruffin" "scored" "points." "Seriously."

Are the quotes helping make this more interesting? No?  "Crap." This post is a "gimmick," sure.  But so are the "Thunder." "No disrespect."

"Step your game up."

The Trail Blazers RIP CITY UPRISE rally, in Pioneer Courthouse Square, will take place from noon-3 p.m. The event, which will feature music, contests, giveaways, video entertainment and appearances by alumni ambassadors, will be emceed by Trail Blazers play-by-play voice Mike Barrett and will feature an appearance by the entire Trail Blazers team and coaching staff at approximately 2 p.m. 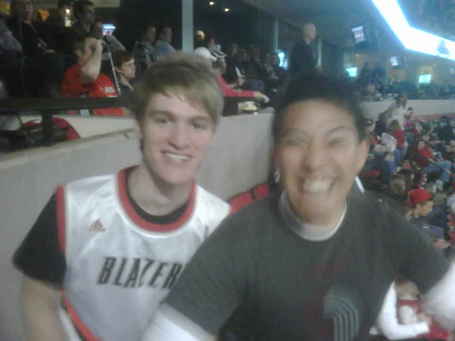 Nate's Postgame Comments
Nate on the result: "I'm just happy. I thought our guys came with a professional approach. We talked about not giving that team any confidence at all from the start. We held them to 31 points in that first half and then we wanted to try to get our guys no more than 2 or 3 quarters of play.  I was able to rest some guys."
Nate on why he pulled Brandon early: "I pulled him because I thought we wanted to get him out and play some other guys."
Nate on the emphatic nature of the win: "It's great. It's really good for us right now. We have some guys that need that time. We have some guys that need time on the floor.  I was able to get Brandon out of there pretty quickly. Losing Nic right before the game forced us to have to shorten the rotation. It was good to get Frye and Rudy and Greg and those guys some minutes."
Nate on Nicky Barnes: "He was feeling under the weather right before the game and wanted to give it a go. Once Doctor Reese came in and looked at him and basically said he needed to go home, so we sent him home so he could rest. Hopefully he'll be ok and ready for Wednesday's game."
Nate on defending Durant: "Travis and Nic had that assignment.  Basically we wanted to get them ready and focus off of guarding that type of scorer. Not allowing him to get anything easy. Just making him work for his catches. Work to score.  We had some schemes that we wanted to run, as far as where we wanted him to go. Tonight was about trying to execute, come up with a gameplan, and execute with that gameplan."
Nate on scoreboard watching: "We know that a few teams won, Denver won tonight and San Antonio is up pretty big right now. There's still going to be a lot of scenarios that could play out on this last game.  We're going to come to play.  It's not resting guys, we want to finish this season off strong."
Nate on whether he has taken stock of the recent success: "Not really looking back. I'm looking forward. I'm looking at the next game. We've been able to win a stretch of games and get hot and just focus on the game in front of us.  Coming out and playing better. We've been pretty much saying this for the last month, we're just trying to win every game, take it one game at a time, and win every game. We've been able to have some success the last couple of weeks."
Nate on Rudy: "We need him. He's done a good job of giving us another option, bringing that energy and scrappiness to that second unit.  With him and Travis, it's a one-two punch. Greg is doing some good things. Our bench has done a nice job. Not only Rudy but that whole second unit. You need that. You need that type of spark coming off the bench."
Nate on how hard it is to scout for the playoffs: "Nearly impossible. What we have told our guys is that we want to get the game in the last 2 weeks because all of the teams in the playoffs have played each other. Just start to break down film on all the teams pretty much.  Because other than the Lakers there's a chance we could play any of these teams.  That's what we've done.  We'll know right away on Thursday after the game who we are playing but we have to get tape on everybody."
-- Ben (benjamin.golliver@gmail.com)