Share All sharing options for: John Wall The Future 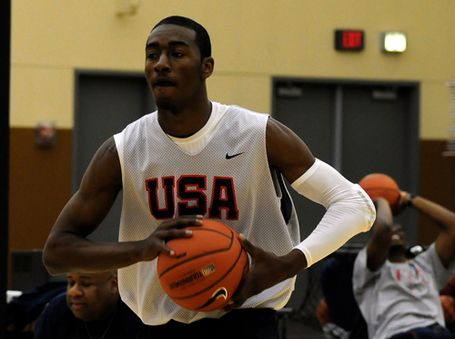 John Wall, the #1 prospect in the high school class of 2009, does everything (except consistently hit NBA threes)... and he gives a pretty good interview too.

With Kentucky, North Carolina and Duke (among others) actively recruiting him, I caught up with him last night after Team USA's practice at the Portland Trail Blazers Practice Facility.

Click through to read what he had to say about his game, Brandon Roy, dealing with nerves and how he sees himself fitting into a college program next year.

I see some Isiah Thomas in your game... who do people compare you to usually?

A lot of people tell me that. Between him and Jamal Crawford, Derrick Rose and Dwyane Wade. I mean it's just great to be compared to them.

Isiah Thomas, he's one of the greatest players. Even though he was short, he was a tough guard that got into the paint, and just never, never quit.

That's something I'll try to do. Even if we're down a lot, i try to hustle for every loose ball and things like that, even if I think I can't get it, it's just the point of going out there and showing you can hustle for it. 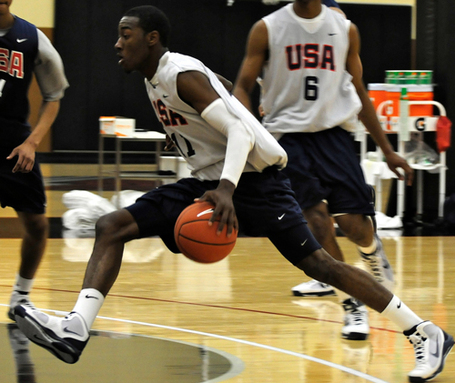 Can you shoot with your left like Rasheed Wallace?

One day, my coaches just taught me about it and I just kept using it and [my left hand skills] came up like my strong hand. I can use both of them now. Most people try to force me left but it doesn't matter which way I go, I can finish either hand.

Does it help crossing people over too, you can go either direction?

Yeah, it helps a lot, because most people can only cross up one way, but if you can use both hands and finish with both hands, it's great.

I know at least one poll has you ranked #1 in the class of 2009. Some of the other guys on this USA team have been ranked #1 as well. Do you guys ever joke about the rankings a little bit?  You ever say anything to them or do they ever saying anything to you?

Nah, I'm not one of those types of people.  I'm just a laid-back person.

We might make a couple of jokes here and there but I don't take it personally because... it's just... sometimes I'm about to cry knowing where I'm at right now. A couple of years ago I had a bad 'tude and never thought I was going to make it this far.

I came to playing with D 1 sports and my other coach, Tony Edwards, changed everything around for me. Got me seriously involved into basketball.

I just work hard, stay humble and hungry as I can.

Even if I might be #1, I don't take it as that. I'm on the court with 9 other guys that are top-ranked players in the country and I'm just trying to play, get up and down the court and win for the USA team.

Having played with these guys on Team USA you probably know them better than anybody.  Who would you pay to go see play?

I pay to see all of them play.

When you look at the rafters here in the gym (Portland Trail Blazers Practice Facility) and you see banners with names like Clyde Drexler and Bill Walton, what goes through your mind?

It feels great just to practice in an NBA arena.

Not too many kids get this opportunity, I'm used to playing in recreations and high schools... but to get a chance to practice in the Portland Trail Blazer arena? And when the players can walk in here any time any time and can you see them? People with jerseys hanging up? And then just to play in the arena on Saturday?  It's just an honor.

You see Brandon Roy over there in the weight room earlier?  What's that like to see an NBA All Star?

It's just great to see an NBA player come to watch us practice. He's doing something where we want to get.

Just for him to take time out and come to see us practice for 5 or 10 minutes it just shows that he's not one of those people that forgets everybody, he's still going to come back and support no matter what.

Even if he doesn't know us that much, he just came here and took time to watch us practice.

You going to the Blazers vs. Lakers game tomorrow night?

Have you seen this Blazers team play?

And then you're playing in the Rose Garden the next night. I read that you've never played in an NBA arena before, are you nervous?

Yeah, because I play in front of big crowds back home, everybody wanted to see how my high school team play so I'd be nervous, but playing in the Portland Trail Blazers arena, a BIG arena, an NBA arena, hopefully it's somewhere where I can be in a couple of years.

(Laughs)  You gonna do anything different? Keep yourself calm? Take a nap before the game?

Just do what I basically do, that's all I can do. No point in switching anything up. You step out there on the court [and it's on]. I'm in high school, I see over 5,000 people out there, I'm nervous. But once the ball goes up and I get a play or two up and down, I just get into the flow and you let everything go.

Are you starting to feel the pressure about making a college deciison?

Yeah, it's a lot of pressure. Talking to some of these guys, some these guys want me to play with them.

I'm getting recruited by [UNC commit] John [Henson], and I'm getting looked at by Carolina,

DeMarcus [who is going to Kentucky], I've been talking to him for awhile.

Mason [Plumlee] is talking about Duke.

Then Xavier [Henry who is still uncommitted] too.

It's pretty tough, it's just going to have to come down to where I feel most comfortable.

There are pros and cons to playing college ball with one of these guys, right? If you play with them you have a great chance to go deep in the tournament. You play without them, perhaps you get more exposure?

It really doesn't even matter about the exposure.

I don't want to come in and be the person they have to go to every key play because for a freshman that would be kind of tough.  I wouldn't mind taking challenges but I'm going to be honest, it's going to be a tough one as a freshman, going through so many games, travelling.

So to have some veterans on the team and you come in and be the missing piece, that's going to be [what I'm looking for].

Are you a little bit scared or apprehensive about next year?

Nah, I'm not scared at all.  I play when I take [campus] visits, I play against certain guys and I do good. You just can't be scared. You just gotta go up and play your regular game.

But college is different, there's things you can't do that you did in high school.

That's the part I like about it, you go to summer workouts and you get stronger and faster and learn the game more.

Your home state team UNC just won the NCAAs. Does that influence your decision at all?

Nah, not really, you know they haven't really started recruiting me that hard yet.  [It's nice] just to see them have so many good players come out lately.

But the state of Carolina, Chris Paul I think was the last great player to come out.  For them [UNC] to bring it back, to get the state back on this map, and then for me to come up as the player I am, it means a lot.

Will you guarantee a victory on Saturday? 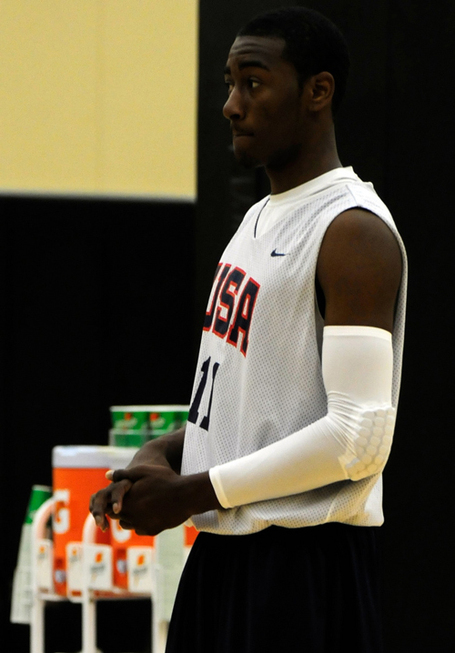 John Wall is playing in Saturday's Nike Hoop Summit, a high-school all star showcase event that pits the USA Junior National team against a collection of International prospects.