The only compelling thought I had tonight besides "LaMarcus Aldridge's testicular efficiency rating is skyrocketing before my eyes... pause..." was "Nate McMillan derives an unhealthy thrill and pleasure from beating teams into way beyond submission.  I wonder if it's a diagnosable psychosis because we've ventured way past normal paranoia into something much deeper and darker."

My next thought was "I enjoy this torture... I enjoy this a lot... I could watch this ... for hours and hours ... if not days... and never, ever get sick of it. I could calmly sit in an unlit room, drinking bottled water, and not flinch as tonight's 48 minutes were played over and over and over again."

Needless to say, once I started saying some of this stuff out loud...  yes, I'm typing this from a padded room.

The nurse just told me the final damage was Blazers 125 Jazz 104.  There were approximately 459 dunks. Nicky Barnes did every single thing possible on the basketball court.  Brandon was Brandon.  LaMarcus, as mentioned, single-handedly increased the testerone level of the entire Rose Garden on his way to 26 and 5, thoroughly out-playing Carlos Boozer.

Hold on. The nurse is calling me.  What's that you're saying? Speak up.  Oh. She's saying read Dave's story.

On the result: "I thought our guys played great. They did what they needed to do.  We knew Utah would come out and play physical and we needed to play that style of game. We established that at the start, defensively.  Offensively we had 17 assists in the first half so we got quick ball movement and 32 for the game.  Just a solid 48 minute game."

On the team's two stars: "LaMarcus and Brandon, both guys have been good. It was good to see them get off to a good start. Knock down some shots. Establishing the paint. We've been talking about that a lot lately. It starts with LaMarcus and tonight he was great down there.  Getting deep post position. Making good reads.  Brandon had his rhythm tonight. It was good to see those guys knock down shots."

On taking care of homecourt:  "We've been talking about it a long time. Hopefully they're figuring that out.  That style of play, we must bring to the floor. Certainly against a team like Utah, we've done that.  I thought the Philly game was the only game that we didn't come out aggressive. In the 3 games since then, we've come out pretty aggressive.... Well we need to. We have to. The only game we've lost on this home stand we didn't do that, and we lost that game. Raising your level of play, teams are playing more possessions than they were a month ago so you've got to raise your level of play. Our guys have done that."

On the quick start: "They're a good team. They are an experienced team. I felt they would come in ready. But I thought our guys executed the game plan. We wanted to be physical with them defensively. Offensively we wanted to push the ball and keep the pressure on their defense, force them to get back, and when we've done that we've had success against them.  So we did that. The first quarter we had a (39) point quarter, we gave up some easy baskets but we got the tempo where we wanted it."

On his level of satisfaction: "It's great. I'm happy with how we played but our work is not done.  We took care of this home stand and now we need to show that we can play on the road and we have an opportunity here.  As I told our guys, it's a lot of talk about clinching and all of that. We just need to take care of business. Continue to approach it like we've always done it, one game at a time, win that game.  Try to pull each night out. The focus is to go to Oklahoma City who beat San Antonio tonight and be about business. We haven't won there and we need to win there."

On Joel's technical foul altercation: "Well, I felt like they were going to, they would be more aggressive and they were going to be more physical.... I told them to get more physical and get in there and hit some people. What our guys have got to understand is that we don't want to lose our aggressiveness in that situation but we must keep our head. We lose Joel, it's a big game, but we pretty much had control over that game. We have to be smart in situations like that. Continue to beat them as opposed to talking or allowing to try and change the game."

On Batum: "He's been good. He's hurting. His ankle is very sore. But continues to get treatment and just goes out there and plays on it. When he's knocking down his shot, it just makes it more difficult for other teams to play us, especially when Brandon and LA have their offense going.  Tonight they were leaving him like crazy and he was getting to the open spot and knocking down his shots. He just continues to get better."

On getting ready mentally for the road trip: "We'll talk about our road record. The energy, the scrappiness that we bring to the floor at home. We are playing for 48 minutes, playing together, we've got to do that on the road.  We can win on the road. It's a mental challenge. You don't have your home crowd.  We can win on the road, our record is better than it has been.  This is another challenge for us to go out on this four game road trip."

The team's development: "I think they are growing every game. They're gaining experience as far as what they need to do.  Where we are.  I see the growth pretty much every game. Look at us just a week ago and then playing against Phoenix, playing against Utah tonight, and really controlling that game from start to finish. I see the growth in these guys every night that we come out."

Blake's D on Williams: "It was good.  We really want to take the ball out of his hands. Make Brewer or Miles or Kirelinko bring the ball up, and just work him. Blake did a nice job of denying him and keeping the ball in front of him.  Williams is good.  We didn't have anything really easy tonight.  We kind of contained them and did a good job." 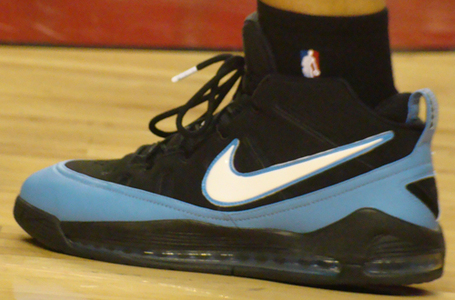 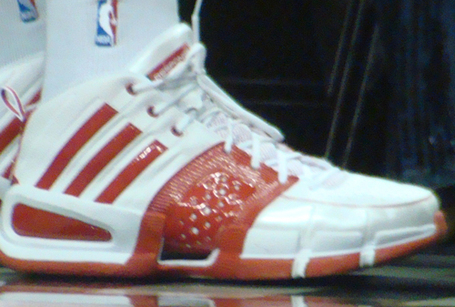