Since I'm a BE rookie and first time meeting everyone in person, I thought I do everyone a favor and do a recap/media row report from the Agency!!!

Dave and Ben were running around mingling so I'm gonna do their job for them...unofficially.

If our players wanted to be part of the mile high club, they definitely didn't score.

Don't go to the Denver Blog.

This picture with my new $99 Canon point and pray lens describes it all.

- There was at least 200 people there.  All having a GREAT time.

-  Still.i.rise behind Josh mingling with some other BEdger...so many I couldn't keep track.

-  Me, trying to do Ben's job taking pictures but I suck.

-  Everyone getting pissed off and starting drinking cuz we were losing

- AND then everyone started mingling and having a good ole time because we have a common bond at BlazersEdge:  passion for our Trailblazers.

Ok, this pic doesn't describe everything but whatevers...we drank, we had fun, we are a community, and we ARE RIP CITY!!!

ere are some more pics:

4.  BlazerManiacAndy...Dude, the guy is everywhere...he's like a picture magnet...and of course, there's Sophia totally disgusted at our Defense with her frenchie french shirt.  yeah, she brought her A game.

6.  My two single lady friends oon to be Bedger Bree and Linda I brought for RoodieeeFurrnandez

Prez taking a pic of me and Edger's favorite writer and Ben's bff: john canzano: 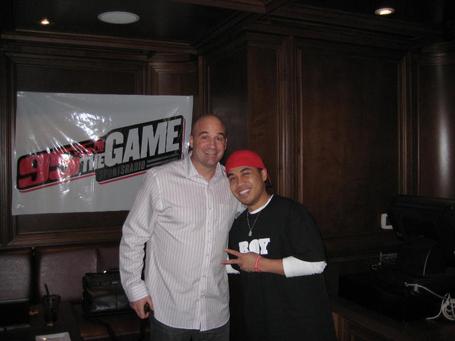 Dave's shoes...Yes, he walked here from Idaho or wherever...

it was a REALLY fun night...i hope to see more Edgers next time... THANK YOU DAVE AND BEN!!!!