As the year winds down, it's getting to be that time when end-of-the-season speculation heats up.  Brian Hendrickson already had a piece about Brandon Roy's chances at the All-NBA teams, which should (hopefully) be a shoo-in.

The most interesting race to me this season is Coach of the Year.  Love him, hate him, or mock him (or all of the above), Nate McMillan's resume will be tempting to national voters.  The team's year over year improvement, their success with a young roster, the appeal of the turnaround story, Nate's ties with Team USA, his flawless reputation, and his ability to guide the development of his young stars all combine to put him, one would guess, at the top of the list of potential COY candidates.

Other names I've heard floated: Mike Brown, Stan Van Gundy, Rick Adelman, and Gregg Popovich.  With so many injuries this season, it will be interesting to see whether voters give credit to coaches that kept their team together in spite of missing key players for long stretches.  Utah, Houston, and San Antonio, in particular, have weathered major injuries much better than might have been expected.

One could argue that Portland has too.  Looking back: how devastating could that stretch without Blake have been?  Martell? Greg? The list goes on.

If I had a vote, I would give it to Jerry Sloan.  But I don't. So I put the question to Nate.

Here's what Coach McMillan had to say.

Have you given any consideration to who might be Coach of the Year this year?

No, I really haven't thought about that. I'm sure there's a list if I take time to think about it but no. I think a lot of guys have done a nice job.  I haven't really took time out to think about who I would vote for.

Your name has been mentioned.

Well, again, I think a lot of guys have done some good things. Our team has improved and gotten better.

There could be a vote or two [for me] there.

All of us [coaches] work hard and should get some award.

What are your criteria for judging Coach of the Year?

Was Utah your preseason pick to win the division?

A week or two back, Suns Coach Alvin Gentry said he has gameplanned for Utah the same way since 1992.  Do you find yourself in the same situation?

Pretty much. They haven't changed much. They've tweaked some things.  They're going to play in the half court. They're going to set screens and move. And try to beat you in the paint.  Defensively, they're not going to give up layups. Their gameplan has been the same, it's been successful, it hasn't been a lot of change.

Does Jerry Sloan creep on to your short list of Coach of the Year candidates?

I think you have to consider him.

Pretty much every year, right?

Well, yeah. And I think this year because they've had a number of injuries and they can have a huge effect upon your team and being in a race. They've managed to be right here in the race and I think they've had 4 or 5 of their key guys out for close to 100 games combined.  That's a ton of games for a team to have to miss some key guys.

It's interesting to see how closely his statements about personal achievements and recognition mirror Brandon's statements on the same subject.  Neither man is particularly anxious to discuss those topics.

I just stole so much memorabilia from Blazers practice!  Anyone know how ebay and paypal work????  Kidding.  But check these pictures out.   The Blazers had an autographathon today at practice. 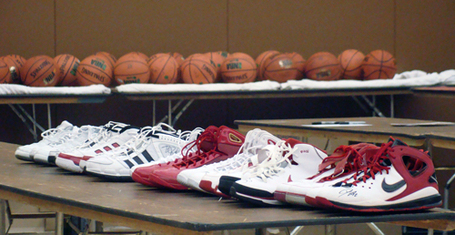 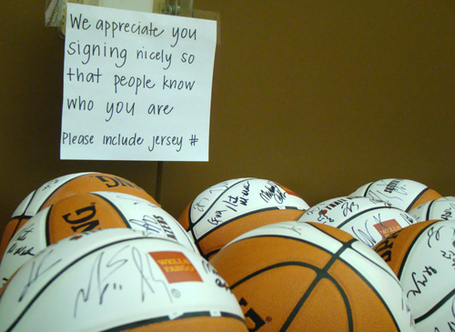 Michael Ruffin, this means you. 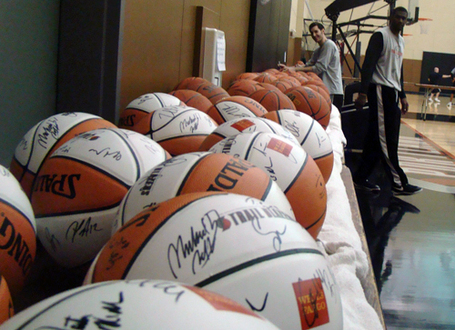