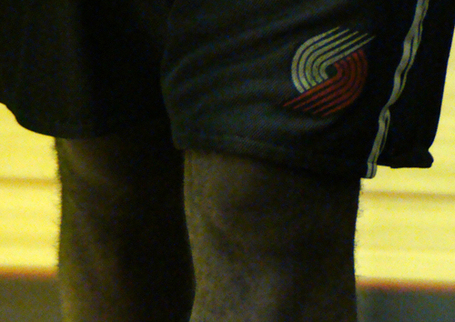 Good news: Greg's knee does not appear to be swollen.  He was shooting free throws after practice and receiving some coaching from Maurice Lucas.

Short post today because I spent most of practice twiddling with a new lens for my camera. 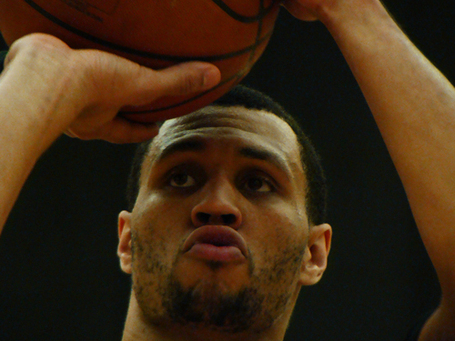 When do you think you'll be back?

Does it bother you when people question your commitment?

It does, but I'm out here working, doing everything I'm supposed to do. What else can I do? I'm trying to do more. I'm trying to be around more.  But still, it's like I never do enough.

How does it feel when you run? Is it sharp pain?

Yeah, it is. It's really... I gotta talk more with the doctors but you know right now I feel fine. But when I go out there and run that's when it hurts.

Is that because of the bone chip?

I'd have to talk to them some more.

How tough is this injury?

It's very tough. Especially [because] the team is getting down the stretch, we're in that race to make the playoffs. I definitely want to be a part of that and try to help these guys win.  I'm pushing to get back. I'm pushing. There's really nothing that I can do about it except give it time and do what I'm supposed to do.

When does it hurt? Can you cut on it?

I've tried. It doesn't feel good off this leg, pushing off with my left.  I wouldn't say [that it hurts when I do] anything, [because] there's a couple of things I can do where it's just sore a little bit. And I can definitely make it through that [pain wise]. But [it hurts doing] the big stuff, like running and stopping, I can't stop off my leg."

The swelling went down so it's definitely getting better. [After that], then it kind of stayed the same [pain wise].