In a high-flying, knock em down barnburner, the Portland Trail Blazers eeked past the Memphis Grizzlies 86 to 66 at the Rose Garden.

The Memphis Grizzlies displayed offensive efficiency from the opening tip, refusing to use either free throws (0 of 0) or three pointers (0 of 4) during the first half to help their cause.  It was a bold gambit by sure-fire future first ballot Hall of Fame coach Lionel Hollins, but one that paid major dividends to the tune of 36 points at the break. Add in 11 quality rebounds and 8 assists in the first half, and the entire Grizzlies roster in 24 minutes combined to produce a slightly better-than-average game for LeBron James.

Undaunted by the Grizzlies' firepower, the Blazers did something they haven't done all year, turning to Brandon Roy and LaMarcus Aldridge for the bulk of their scoring.  Roy (21 / 8 / 4) and Aldridge (18 / 7 / 2) proved they were up to the challenge, carrying the Blazers to the nailbiting victory.

The Grizzlies would not go down without a fight: their sterling 11 point third quarter effort rivaled all but the best opposing team performances the Rose Garden court has seen this year.  Hitting an astonishing 4 of 18 shots in the period, the nets on the Grizzlies basket actually appeared to light on fire briefly halfway through the quarter.    Mike Conley was the likely fire-starting culprit: his perfect 0 for 8 from the field shooting had the Rose Garden faithful salivating in their seats at the sight of Steve Blake's future replacement.

In the end, one should give credit to the Blazers' team defense, as Roy, Aldridge, Outlaw, Oden and Blake combined late in the third quarter to prevent Hamed Haddadi from reaching a potential triple double. Haddadi finished with 7 points, 5 rebounds and 1 assist.

The night's on-court action was matched only by Hollins' postgame press conference, during which he appeared to fall asleep while standing up in between questions on multiple occasions.

The reporters present did not seem to notice, possibly because they were also asleep.

My tape recorder filled up during Nate's session.  My sincere apologies.  Given the rest of my recap so far, I know you're going to think I'm making this up because I didn't want to spend the 10 minutes it would take to type up his comments after such a dreary game.  That is not true.  Through my lawyers, I issue a firm denial.

Nate only spoke for about 3.5 minutes and I'm the male Mavis Beacon when it comes to words per minute these days.  I swear, my recorder really did fill up.

So here's your synopsis from memory: Nate effusively praised Aldridge, particularly his decision making on offense and how he is looking to be patient, recognize mismatches and attacking the basket.  He praised his team's defense.  He was impressed by the 50-28 rebounding differential and saw that as a key to the win. He said the team would not practice tomorrow and would pick up preparations for Utah on Monday morning. 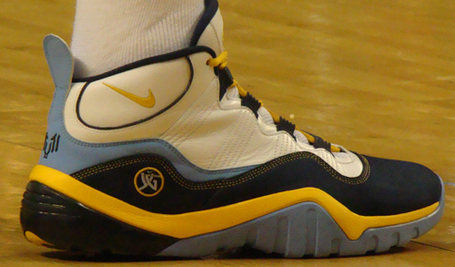