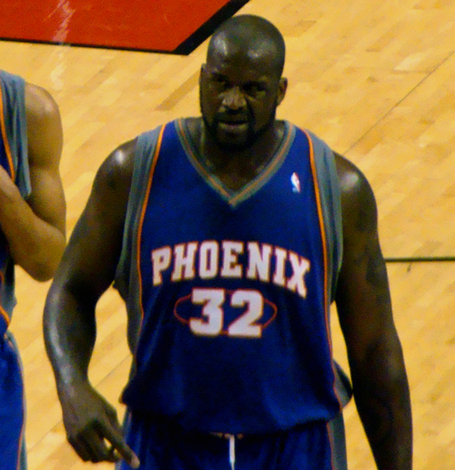 Over the last week, there's been some hand-wringing among team employees and fans alike, highlighted by a painstaking magic number countdown and a whole lot of scoreboard watching.  Yesterday, I even thought I saw some stress and strain on Coach McMillan's face; the pre-game buzz around the arena today seemed filled with consternation.

Why?  Because it feels too good to be true for such a young team to maintain their quality of play as the playoff pressure heats up?  Because it's been so long since the playoffs were a legitimate possibility for the franchise that everyone is afraid of jinxing it?  I don't know.  But I do know this: the Blazers proved their playoff mettle again tonight, dispatching the Phoenix Suns 129 to 109 at the Rose Garden.

The Suns came out with heavy legs and there would be no second wind.  The Blazers extended their early 12-5 lead in both the second and third quarters, relying on a season-high 29 points from LaMarcus Aldridge (plus 12 rebounds) and a 26 /9/ 6/ 2/ 1 effort from Brandon Roy.  By the third quarter, with no other recourse, Matt Barnes resorted to giving LaMarcus the flailing frustration foul and staring out into the stadium oblivion. 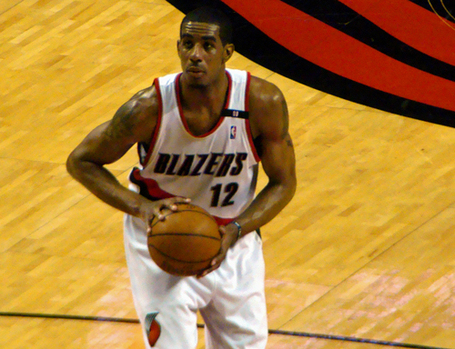 Soon after, the Suns starters were on the bench, grounded for the night by Coach Gentry. Rudy Fernandez made it a total wrap by scoring 5 points in the last 1.7 seconds of the third quarter --  a ridiculous backdoor cut layup, followed by a steal, followed by a 3 pointe -- that had the Rose Garden in a running-with-the-bulls frenzy.  By the fourth quarter, even Brandon Roy was whoofing it up a little bit, raising both arms in the air after he assisted on a Steve Blake 3 pointer to run the lead to 124 to 95.

The only drama after that was trying to determine how long Rex can hang in the air during a breakaway dunk.

It's a long time. I'm actually not sure if he's come down yet.

The Blazers, and their playoff hopes, haven't either. 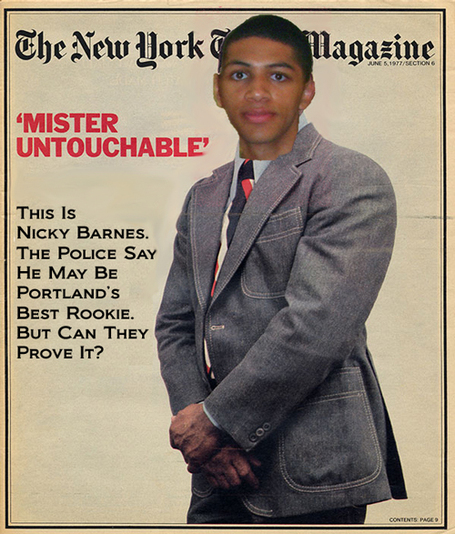 Any complaints about the game?: "No. I thought we rose to the occasion. We didn't play in our last game against Philly. We really needed this game. Phoenix needed this game.  As I told our guys before the game, we play our way into the playoffs or we play our way out.  I thought tonight they came out and they wanted to get there.  They showed the effort on both ends of the floor. Our ball movement was great. Defensively we did a good job of just making them earn everything."

On Shooting 60%: "They'll give you looks. At times, sometimes you can get caught up in their game. I thought we did a good job of playing that tempo but a controlled tempo. It wasn't like a run and gun, we were moving the ball, we had 30 assists tonight so we were moving the ball against their defense and we had open looks and a lot of the shots that didn't fall in the Philly game were falling tonight for us."

On the day off on Tuesday: "I think that helped.  That certainly helped. Having some days to recover, coming off a 5 game road trip, a day off.  We gave them the day off because we looked a little sluggish, so I'm sure that did help."

On Aldridge's game: "I thought LaMarcus was good. We told him and Greg, get down in the paint. We knew they would play a lot of zone.  Man or zone, we wanted to go inside, whether it was posting up our bigs or penetrating the ball.  I thought LaMarcus did a great job of getting deep and working for post position.  Establishing the paint for us."

Nate on keeping the starters in: "We didn't know what they would do.  They're a team that can put up points.  What we wanted to do was keep the pressure on their defense. We knew they played last night.  We say all the time, we play early or play late.  I thought we did a good job of that tonight by continuing to push the ball, try to beat the zone down the floor and we didn't have anything easy.  Make them work defensively by moving the ball.  I thought we did a good job... seven minutes to go in the game. I think it's a 20 point game. That game's not over. You make sure you get control of the game and we slowly worked our guys out.  I thought our guys did a good job of just playing.  Make sure you seal that because we are still try to get that "X" next to our name (on the standings).  We had guys come in and go to work."

Nate on Rudy's game: "I thought he was great. He's one guy that a team that's playing a zone, he can open up that zone. His shot is perfect for that type of defense.  Even though Phoenix is one team that sticks with the zone, normally if you knock down a few shots like Rudy did, most teams get out of it.  They stayed in it.  It was good to have him out on the floor when teams are playing a zone."

More Nate on LaMarcus: "I think a double double for him should be pretty easy to get.  If he's playing 35 minutes, 10 boards and double figures in points should be something that he can get. Matchups, he's learning how to play against the different matchups, when bigs are playing him he can take them out on the perimeter. When smalls are playing against him, he's learning to slow down, face up and take advantage of his ability to shoot over the top of them. He's still learning how to take advantage of what he can do. I think he can be a dominant force on both ends of the floor."

Nate on Nic Batum: "Nic, his ankle is really bothering him.  He went out and just fought through the pain.  I got him out in the third quarter and decided to keep him out.  There's some swelling there and he played through it.  I could see him favoring that ankle as the game went on. He played through it."

Nate on Nic Batum getting down on the floor: "It's that time of the year. For us to scrap. Show that we want that ball.  He was able to do that tonight." 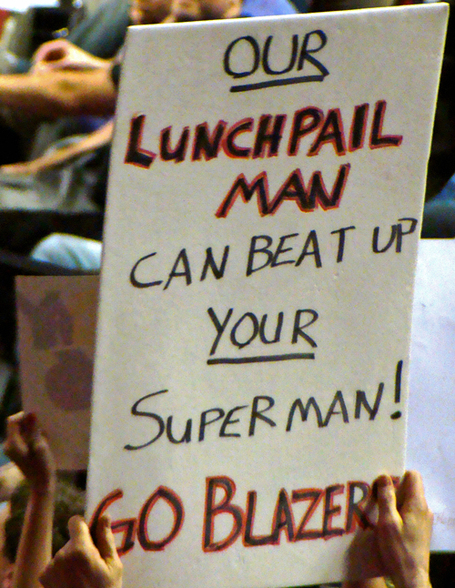 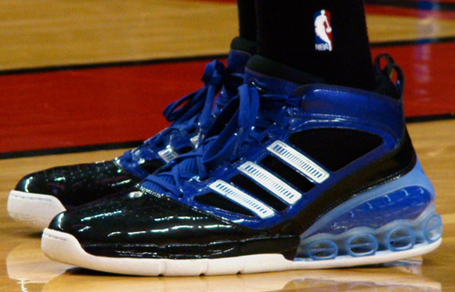 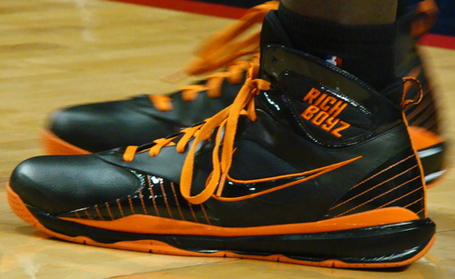 Jason Richardson.  Top 10 in the league? 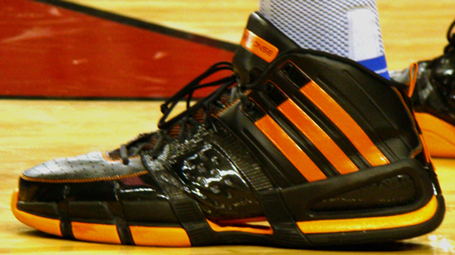