Sometimes something as simple as a routine change can help you better see what you've already been looking at for months.  Today, the Blazers held practice at the Rose Garden for the media day that you've probably been following.

Their practice drills were nothing out of the ordinary.  Bigs worked on a variety of shots with Coach Dean.  Nate led the guard instruction.  Martell bounced around the court, anxious to play as always.

But by virtue of changing venue and extra media activities, their routine had changed.  And my angle on them changed.  We were allowed closer to the players than usual.  We could view the team from anywhere in the arena rather than from a single baseline wall at the Practice Facility.  Afterwards, interviews were conducted on the Rose Garden court, where the team has pulled so many wins out of hats this season (indulge me and forget about Monday).

When the team came together for its customary "Together" cheer at the end of practice I tried to put some physical distance between the group and myself.  To really wide-angle lens the moment for memory's sake.  It's a team that is extraordinarily young, beat up and yet still confident.  Talented as all get out.  Eager to shed the lottery stigma.

So do what I did.  Soak it all in.  Because it hit me really hard in between snapping these two pictures: these guys look like a playoff team.  The same guys that joked around in the fall, audaciously wore "15=16" t-shirts and tripped out of the gates look downright poised as they sit on the brink of accomplishing their goal.  And that's a great sight. 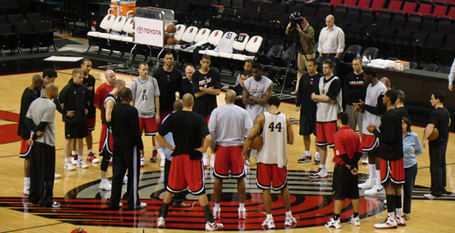 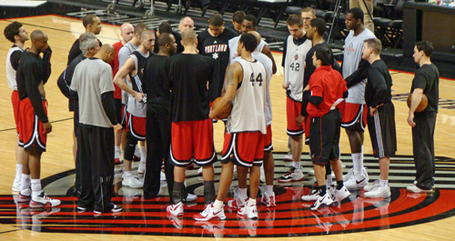 The practice session was loose, with LaMarcus Aldridge teasing Coach Dean about his poor pick-and-roll passes.  And you didn't have to look hard for positive indicators. 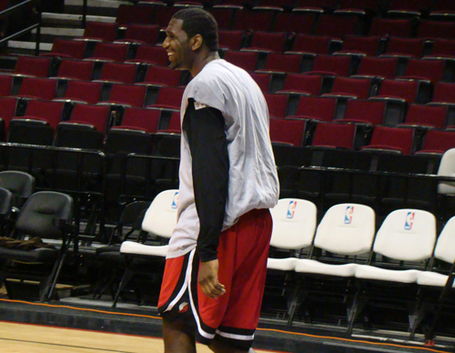 One man who seemed focused (nervous?) was Nate McMillan.  The jokes were gone.  The smiles non-existent.  Straight business.  To the point. Direct answers.  Solely focused on tomorrow's tilt with the Suns.  That's a good thing. 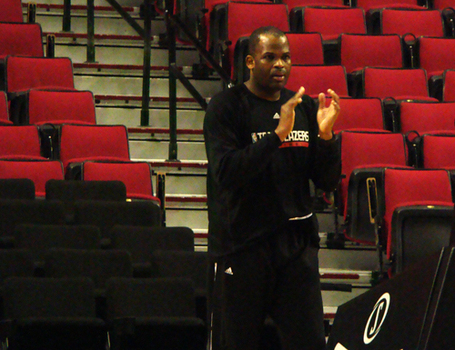 Speaking of the game tomorrow, the word is that you're supposed to wear red to support the team.  People are fired up about this.  I salute their powerful movement.