Phoenix Suns Coach Alvin Gentry is your prototypical "NBA Lifer." He played college basketball for Pistol Pete's dad, was an assistant coach on the Kansas team that Kevin Pritchard Danny Manning led to the 1988 NCAA National Championship, has served as a head coach for 4 different NBA franchises and has made additional stops as an assistant coach over the last 20 years.

So where do you suppose you'll find Alvin Gentry after a sixth straight March loss that put that much more pressure on his Suns team to make up ground and sneak into the Western Conference playoffs?

Hours after a home loss to Cleveland on March 12, in the middle of the night, Coach Gentry fired off the following messages in rapid succession...

12:34 AM ... We will not quit. These guys have great character. Nash.Shaq,and G hill will play hard every night til the season is over

12:38AM ... Don't give up on this team. We need the support of the Twitter Nation! It makes my day reading all the comments!

It's one thing to go behind the locker room door as brilliantly as Jason Quick does.  It's quite another to go behind the living room door -- and that's what it felt like reading Coach Gentry's notes in real time.  That's authentic emotion that made it from his fingers to my monitor.

As far as I know, I've listened to every word Nate McMillan, an incredibly accessible coach, has spoken at home postgame sessions (with the exception of 2 games) in the last calendar year.  Hours of quotes.  I've seen him roll his eyes, sigh, laugh, grumble, defend his players, and the list goes on.  I've diligently transcribed every word Coach Nate has said so that you can get a better feel for his mood after games, wins and losses alike.

What I haven't done is sit down on his living room sofa, lean over his shoulder, and watch as he pulls out his Blackberry and pings messages directly to the fanbase.  That's something only a family member could do.

And that's where Alexis Gentry comes in. 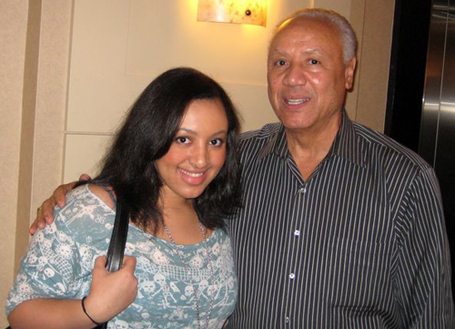 Alexis is Alvin's computer-savvy, writing-whiz, self-described "fan of pop culture" and "geek-speaking" daughter.  She is the founder of a website TrashWire.com and is, perhaps, the only person alive who could convince an NBA Lifer like Alvin Gentry to plug into the latest social networking craze.  On her blog and in article-style posts, she has detailed some of the times she's spend behind the scenes with her father and the Suns team.  It's well-worth your time.

I traded emails with her last week. My questions are bolded; her answers are blockquoted.

There's a stereotype out there that family members of coaches (at all levels in all sports) feel like their coach isn't treated fairly by the media.  You're actually in a very unique position: watching your father interact with the media first-hand and also encouraging him to connect directly to fans via Twitter. Does your father get a fair shake? When you were first selling your father on twitter, what arguments did you make for him to use it?

I think it's the same in every business, when things are great, everyone's happy, but when times are tough, people want someone to blame. Since my dad became the head coach, everything I've read or heard has been overwhelmingly positive. Between the bloggers and the people on twitter, I've been so pleased to see that the fans still believe in this team and I think the media can't help but feel optimistic too.

That was one of the things I told my dad when I was trying to get him to sign up for Twitter, that he would be getting the fan perspective on things without any media filters. So far, I think my dad has really enjoyed reading his replies on Twitter and seeing how supportive the fans are and how much they love their team, even after a couple tough losses.

Your father became coach during the middle of the season after Terry Porter was let go.  Things came to a head during All Star Weekend, which the Suns were hosting.  A lot of reportsmade it sound like a crazy time for the Suns: the coaching change, the events and parties, the questions about Amar'e possibly being traded and so forth. You were at Ground Zero for all of that. Looking back, how would you describe the mood?

For me the whole thing was a bit of a whirlwind. It was my first All-Star Weekend and from the second I got off the plane, things were already starting to go crazy. We were hearing things on the news and I was reading all these posts online. At one point, my dad just said, "Whatever happens happens. Let's have fun!"

Even in the midst of the coaching change, we had an amazing time. We went to the Players Association Gala and Lou Amundson and I tried to get my dad up to speed on current music when he said he didn't know who T.I. was.

The dunk contest, in particular, was fantastic and I really loved checking out all the things going on around Phoenix during that weekend.

Recently Bill Bayno, one of the Blazers assistants, said that in terms of stress: being an assistant coach is about a 2 or 3 and being a head coach is a 10. Would you agree with that? What are some of the things (big or little) that have changed in your life and your father's life since he became head coach?

Being a head coach is definitely more stressful for my dad, but he's done it enough times that he's able to roll with it. As many of his twitter fans have said, "With great power comes great responsibility." I think he's managed to adapt to the change with ease and I've been very proud of how well he's done with the team. We all know he's going to miss "relaxing and eating chicken cordon bleu" but I know he's a good coach and I'm confident that he can succeed.

You have access to the Suns players that others might not.  It's a loaded roster: Shaq, Nash, Amar'e.  But who is the most underrated sun in terms of personality?

I think all the guys on the team are awesome, but I think I have a particular affinity for Grant Hill because I've known him since I was a kid and my dad was coaching the Pistons. He's always been such an amazing, intelligent, kind and all around fantastic human being that it's impossible to dislike him.

Lou Amundson is someone I met this year, but discovered later on that we went to high school together for a couple years. His wonderful sister Alena also helped me file a trademark for Trashwire, my website.

One person I didn't know very well but got the chance to talk to on my most recent trip was Robin Lopez. He was just awesome! We had a fantastic conversation about some great geeky subjects like Watchmen, hand-drawn animation vs. Pixar-style animation, and Facebook etiquette. About five minutes into it, I knew he and I could both speak geek so he was definitely someone unique and fun to be around.

Aside from an awesome blog and the single best "these will make you jealous" pictures section I can remember seeing, what is Trashwire all about? You've worked to incorporate all sorts of cutting edge stuff on the site, what's next?

Trashwire is a site I created in high school around 1999/2000 and have developed over the years, teaching myself about web design along the way. I'm the primary writer, but I also get a lot of submissions from guest writers. I write about whatever I find interesting, from movies to concerts to the most delightfully trashy reality shows.

Right now I've been exploring an area I haven't previously covered on Trashwire: sports. I wrote a piece about the Super Bowl commercials and then a diary-style post about my experiences during All-Star Weekend. Right now, I'm working on a post about my recent trip out to Phoenix and going on the road trip for the Golden State Warriors game. It's basically a much more detailed version of some of the stuff I put on my Twitter (@alexisgentry or @trashwire) while I was out there.

I'm always looking for new writers to contribute posts, so if anyone has anything they'd like to submit, be it sports, a movie review, or even a firsthand account of a celebrity encounter, check Trashwire out and send it over.

The Blazers face the Suns on Thursday night in a nationally-televised matchup wrought with playoff implications.  As you watch the game and you're tap-tap-tapping out your thoughts in real time -- whether via text message, gameday threads, twitter, facebook, you name it --  realize that Alexis Gentry, head coach's daughter, is right there with you.

And later that night, when most everyone is asleep and only the poorest of souls are still busy pulling together game recaps and reports, her dad might sneak on too.