The fist means "Give it to Brandon" 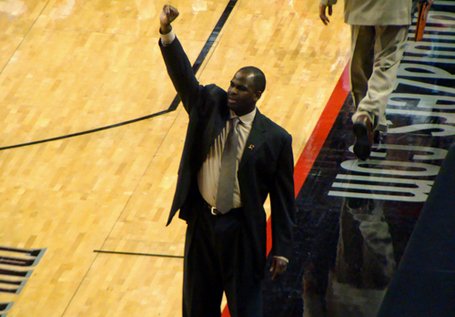 Before it gets lost amid 300 possible tangents (most of which, I'm sure, will involve disemboweling Steve Javie), I need to say: that was one hell of a basketball game.  There is a tendency to throw away the 3.5 hours of your life and emotional investment when the final score doesn't go your way.  There's a tendency to berate your loved ones because you're drunk, throw cups or bottles because you're frustrated, and leave early because you can't bear to watch the last few seconds tick down off the clock.  Those are natural reactions but they are often wrong. Particularly tonight.  Those are the wrong reactions to the Blazers' 114 to 108 loss at home to the Philadelphia 76ers.  Please hear me out.

Almost every time is the right time for snark and cynicism.  This is one of the rare exceptions.

There is a joy in watching a warrior like Brandon Roy refuse to make eye contact for once, his brown eyes fixed 9 feet above the ground, his hands dug deep into a black pullover as if cocooning himself from the heartbreak of an airballed jumper that would have won the game in regulation.  A pleasure in watching as he avoids the writers' seeking eyes, knowing he doesn't have an answer to his 5 of 18. A satisfaction in hearing him give playoff answers anyway: crediting the opponent's defense, refusing to blame the officials, admitting that he, perhaps, took himself out of the game mentally near the end because things didn't quite go right, the whistles hadn't blown as expected.

If it's all wins and losses you miss a lot.

You miss Greg Oden after the media horde disappears.  When there's one lone anchorwoman still learning the ropes, asking him simple things: "Tell me about that dunk?", "How did you change the game?," and seeing Greg's face flash with sincere pride as he tries to remember the things he had just done.  On an NBA court. In front of a lot of people.  Things that will surely surprise him and make him smile again when he watches the tape tomorrow. 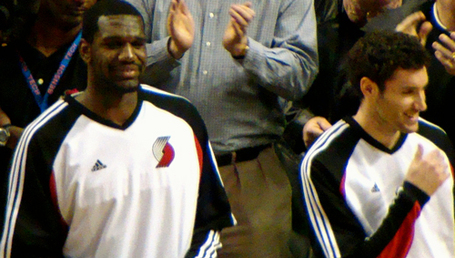 And then the camera shuts off, and his back hunches slightly, and he rolls out of the locker room head down.  It's still a loss.  It was an awkward start for Greg, like many.  But by the end of 53 minutes: confident, ferocious, athletic, dare I say nimble at times.  he was right there during crunch time.  Nate trusted him.  Greg trusted himself.   He's surely taken something from his 13 points, 8 rebounds and 2 blocks effort.  Have you?

Rudy, too, was a rejuvenated force, his fourth quarter perhaps the best single stretch he's played all season.  8 points in 43 seconds.  A four point play. (If ever a player was born to make 4 point plays it was Rudy.)  Skin left all over the court from bouncing after loose balls.  His neck on a swivel as he cruised to a breakaway dunk, checking his rearview mirror repeatedly as if parallel parking or making sure the ghost of Trevor Ariza wasn't riding on his shoulder.  Bigger picture: his shot, which has been hiding somewhere along the Iberian Peninsula, is back: 6 of 12, and 4 of 9 from distance.

Did you feel like you got robbed by the officials: "Well, it's either one of two things.  Either they missed some calls or they are starting to allow you to play playoff basketball. It's been a physical game the last few games we've played. They let a lot go tonight as far as aggressive play, physical play, some contact. So it's one of the two tonight because it was a very physical game, there was a lot of contact and a lot of no-calls. For us, we've got to keep our heads in situations like that and play through it.  It's one of the two."

Did you feel like you got the raw end of the calls: "I thought I saw some things on our end but I thought it was a lot of contact against our guys, a lot of no-calls, that team was aggressive. They were aggressive right from the start.  Defensively, they shot over 80 percent in that first quarter and we didn't make shots. We went to the basket, expect ing some contact, didn't get calls."

101 shots is a lot of shots: "Yeah. You gotta knock down shots. They pretty much put up a wall on all of our isolations and pick and rolls. Made us shoot from the outside.  We didn't get to the free throw line tonight. We've got to be aggressive against that type of defense and not settle. I thought at times we did settle. To get those opportunities you've go to knock them down. 34 threes is a lot of threes. Too many? I'd have to look at the threes.  I thought we could have been aggressive in attacking the basket.  That means that they are closing out to you and when you're in situations like that we can attack that rotation. I thought a few of those shots were due to the fact that defensively they had us at halfcourt and we were shooting with the shot clock running down and not getting into our offense."

Sixers defense: "That team played the same way they've been playing. Very physical. A lot of pressure on the ball. I thought we maybe started off slow but I thought we would snap out of that fairly quickly but it didn't happen until the second half, 3rd quarter and we were able to get back into the game. We got the ball with the last shot."

Was the last play a designed isolation for Brandon: "Yeah, basically. We wanted to make sure we have the last shot in that situation. Tie ballgame and spread the floor."

Greg's play: "I thought Greg was active.  Very active. Blocking some shots.  Cleaning up the offensive glass.  Just being a presence in the paint.  Best we've seen him play in awhile."

Brandon's struggles: "He really didn't have a rhythm most of the night.  Just one of those things.  We've got the last play. Put it in his hands. We're going to make sure that we get something good going to the basket but we definitely get the last shot."

On the free throw disparity: "The key to the game for us every night is to win the free throw line. When you see 39 free throws it shows that team was very aggressive attacking the basket. We only had 17 tonight and 101 attempts. We pretty much played on the perimeter as opposed to going to the basket." 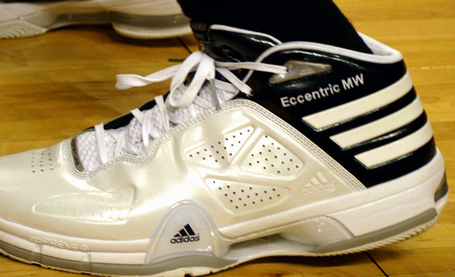