Share All sharing options for: Today's Poll - The Timbers Just Got Official 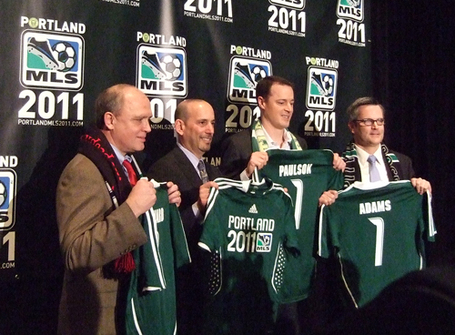 Can't say I had much faith that I would ever see this day. But it happened. Portland has been awarded its second professional team: the Portland Timbers are slated to begin play in Major League Soccer in 2011. Now that it's here, I'll admit that I'm geeking out a little bit. Big, big, big day for Portland.

How the Blazers and the Timbers (and their respective fanbases) coexist will be interesting to follow.

Look no further than this interview on LoadedOrygun with City Commissioner Randy Leonard, who was instrumental in putting together the MLS deal, to feel the friction between the Vulcans and the Timbers ownership group.

On the fan side, just read through the comments on beam us up scottie's fanpost.
Yesterday, we talked a little bit about spreading Blazermania. But if there has been a mass reach-out to Blazers fans from Timbers fans, i've completely missed it. I suppose "Timbers Army" is of the opinion that we'll come around and see the light on our own. Or maybe they've given up on us as degenerate Americans. Either way, I wouldn't blame them.
Is this the go-to website for Timbers info? If not, help me out by please dropping links and sharing your thoughts on the big news below.
[Update: Apparently, SoccerCityUSA is the spot.]
Oh yeah, by the way, vote on the poll.