Get ready to break out your rec stick.

In this post, Kevin Pelton invents a brand new advanced basketball metric simply to resolve an ongoing debate among Blazers fans.  I am not kidding at all.  There is a lot of math here.  It's hard. But it's worth it. Cowboy up and you should have enough ammunition to win any Blazers-related defensive argument.

Introduction: The Blazers Defense is not Very Good (?)

In fashioning a potential solution for the team's defensive ills, Dave concluded with the following words...

The first and most obvious step is just to let these players grow into being better defenders. They need to grow physically, fundamentally, and most importantly in experience. You can't shortcut that process.

Recently when asked to explain our defensive issues I came up with the following areas for improvement.

So, yeah, Pretty much everything.  Likewise, when asked the root of the problems listed above, I wrote...

The team is aware of the issues. Nate has acknowledged most if not all of them directly or indirectly... although in many cases there has not been a resolution.  Most of the problems are a result of age and experience.

On the recent road trip, I think we saw a perfect example of how age and experience can trump talent and depth when it comes to defensive execution.  Experience matters a lot in the NBA: it's always been a truism and it will always be a truism.

But age and experience can also be an easy fall-back excuse for writers, coaches and players alike.  Recently, I've heard increasingly loud voices going R. Kelly on us: "Age ain't nothing but a number!!!111 The team needs to do better!!!111"

If yours is one of those voices, I hear you.  So do the Blazers, apparently, given Brandon's recent comments about the team needing to lock down and get in each other's faces a bit more.  In all of this talk about poor execution and mid-flight moments of clarity, it's easy to lose perspective.

The Conversation: Kevin Pelton, Please Save Us

Thankfully, we've got the Prince of Perspective: Basketball Prospectus's Kevin Pelton.  For a refresher on KP2, check out his previous Blazers-centric work here and here.

Last week, because I enjoy making KP2's life difficult, I asked him: "You know how it's easy to subjectively look at young players and notice their defensive faults? And how it's equally easy to look at older players and call them savvy veterans?  This seems way too simple. And you know how some people argue that experience is an explanation for a young team's defensive struggles and others mock that argument as simply an excuse? Do you think you could settle that debate?  It seems really subjective."

KP2 responded, "You know me. I absolutely hate subjectivity caused by an absence of statistics." He paused, rubbing his fingers on his temples, before continuing,  "Numbers are very powerful. They can solve most debates."

Reassured, I went on, "I know it's hard to measure individual defensive ratings in basketball.  But is there some way to adjust team defensive ratings to take into account the age and experience of its players so we can get an idea for exactly how good or bad a young team is doing on defense compared to the rest of the league?"

KP2 responded, "Are you asking me if I would like to invent a new APBRmetric that I will call Age-Adjusted Defensive Efficiency Rating (AADR) and then let you steal for exclusive use on Blazers Edge?"

KP2 responded, "No problem.  On one condition."

Click through to read through the results of this epic adventure, including the answers to the following questions...

The Finding: Does Age Matter?

For example, John Hollinger's Defensive Efficiency rating measures the number of points a team allows per 100 possessions.  To see his ratings, you must have ESPN Insider, but to give you an idea: Boston rates 1st, Portland rates 18th and Sacramento rates 30th.

KP2's Defensive Efficiency Rating is very similar to Hollinger's only he adjusts the formula slightly to account for team offensive rebounds.  In case you're interested in the specifics, here's what he does...

I use a .96 multiplier on the possession term (FGA + (.44*FTA) - OR + TO) to account for team offensive rebounds (basically, when the defense tips the ball out of bounds after a missed shot).

So Pelton's Defensive Efficiency = Points * 100 divided by that possession term with the multiplier included.

Confused by the math? Don't get discouraged.  The point of Defensive Efficiency is simple: to quantify how well teams stop their opponents, regardless of how fast either team plays.  Given that Portland rates 18th out of 30 teams for Defensive Efficiency, according to the numbers we can say Portland is a slightly below-average team at stopping their opponent.  Does this gel with your subjective view?  It probably comes close.

Next he calculated a weighted age for every team at the end of their season (and up to the current point for this season).   He did this by taking total minutes played that season for each player on the team. On the Blazers, a team that features so many rookies in its rotation, the weighted age is quite a bit smaller than nearly every other team from 2001-2002 to the present.  Using weighted age also eliminates any impact of having Raef Lafrentz's Expiring Contract on the inactive list.  We are looking only at the weighted ages of players that are on the court producing.

At this point, KP2 was ready to graph a scatterplot with Weighted Age on the X axis and LADR on the Y axis.  He did this to find out if there were any visible trends between age and defensive performance since 2001-2002. 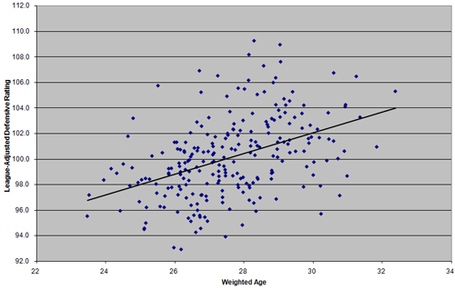 So what does this chart tell us?  Well, there certainly does seem to be a visual correlation between defensive efficiency and age.  What say KP2?

Look at the trendline that runs through the graph.  It shows older teams do, in fact, play better defense.

That trendline actually predicts what each team's Defensive Rating "should" be based on their effective age.

The slope of the trendline is about 0.8, which means for each additional year of effective age, teams defend 0.8 percent better relative to league average.

To do that we simply calculate the correlation between the ratings and age given the data available.

What we have is something in between -- you can see on the graph that there are few teams in the upper left (young, good defense) or bottom right (old, bad defense) quadrants.

The actual correlation figure of this data is .434. How strong is .434? It's decent. Better than what I would have expected going in.

A cool statistics trick: if you square the correlation (multiply it by itself) you can calculate an estimate of what percentage of the variation in teams' defensive ratings is explained by their effective age.

In other words, approximately 18.8% of the variation in a team's defensive efficiency ratings since 2001-2002 can be explained by the teams' effective age.

Whoa. Whoa.  Approximately 18.8% of defensive efficiency can be explained simply by effective age?  That's no small number.  But what about the other 81ish percent?  Where does KP2 think age fits in on the list of factors that explain a team's defensive efficiency rating?

I think 1) coaching, 2) defensive talent of personnel and 3) experience is a fair way to order them.

So now that we've done our homework and found out how age and defensive efficiency are mathematically related, let's turn to this year's Blazers.

Here's the scatterplot for this year's teams only.  Same as above: Age is on the x axis, League-Adjusted Defensive Efficiency Rating is on the y axis. 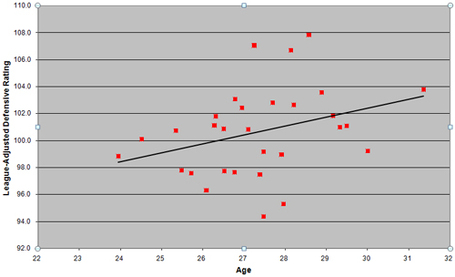 So, what does this chart tell us about this year's Blazers?  KP2 take it away...

Again, the trendline indicates how well a team "should" score on defensive efficiency given its effective age.  On this chart, the Portland Trail Blazers are the second square in from the left because they are the second youngest team in the league.  As you can see, their square is above the trendline, meaning they are in fact better defensively than we'd expect from such a young team.

Exactly how much better are the Blazers than they should be? KP2 set out to answer that question by creating "Age Expected Defensive Efficiency Ratings," (AEDR) which adjusts his standard efficiency ratings based on weighted age.

Here's the formula from KP2 in case you're interested.

(Hilarious note: 128.48 is what a team's defensive efficiency would be if its average age was 0 years old.  That might be extrapolating too far out of our sample.)

AEDR aims to answer the question: based solely on the team's age relative to the rest of the league, what should we expect their defensive efficiency to be?  For the Blazers, a young team whose standard defensive efficiency is 109.8, their AEDR is 111.3.  In other words, based solely on the age of their personnel, we should expect the Blazers to play less efficient defense than they actually do.

What will AADR answer for us, according to KP2...

What we're saying with AADR is: hypothetically, if this team was the average age, what would its defensive rating be, given the relationship between age and defensive rating?

Here's a chart comparing all 30 teams' defensive efficiency ratings with their AADR.  The column on the far right shows which teams gain and lose the most when age is taken into account. 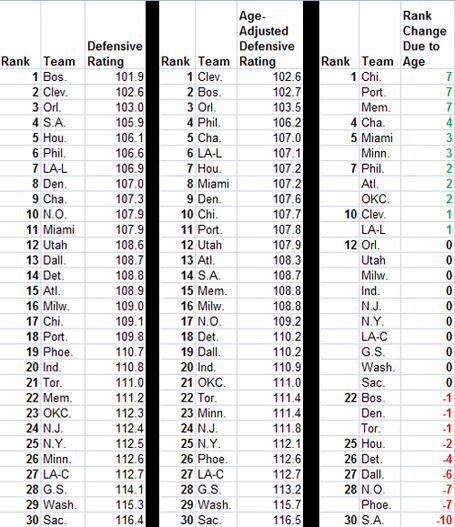 Well, the team that is highest above the trendline is Cleveland, meaning they out-perform expectations based on age more than any other team.  Cleveland leaps over Boston (No. 1 in Defensive Rating) by virtue of its youth. The lowest under is Sacramento, which is the same conclusion provided by looking just at Defensive Rating.

Let's return to our original questions and provide some summary answers.

Of course, any team can play better defense.  But to expect the Blazers to play significantly better defense (even if it's Brandon who is doing the expecting) is asking a lot.  As KP2 noted, only 2 teams since 2001-2002 have averaged 25 years or less and posted better than average defensive efficiency.  That's 2 teams out of a sample of 240.  The odds for the Blazers to accomplish such a feat are statistically quite long.

In general, the same teams that are the best at defense when age isn't taken into account.  However, the Blazers are one of a select group of teams that shows significant defensive efficiency improvement in the league-wide table if age is adjusted for.

There is a demonstrable relationship between age and defensive efficiency. By one measure, we can estimate that age accounts for approximately 18.8% of defensive efficiency when surveying all teams from 2001-2002 to the present.  Age is certainly a factor that should be considered when assessing a team's defense, however coaching and personnel are most likely more critical factors.