The Man Behind B. Roy's First National Magazine Cover

Share All sharing options for: The Man Behind B. Roy's First National Magazine Cover

I hope you saw the news that Casey Holdahl broke yesterday in the fanshots: Brandon Roy is the cover boy for Dime Magazine this month, marking his first appearance on the cover of a national magazine.

Last night I caught up with Austin Burton, the Dime writer who wrote the cover story.  Austin was super gracious with his time.  He explains how he wants to give the Northwest some shine, how Brandon reminds him of KG (!), who has the best sneakers in the league, and much, much more.

Please give a big thanks to Austin from BE in the comments. 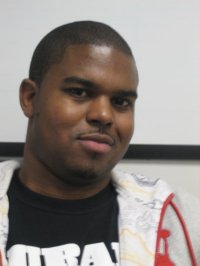 "The man behind B. Roy's first national magazine cover."  That has a sweet ring to it. Tell us a little bit about your background.  What other major stories have you done for Dime? How do you flip writing about basketball in ways others might not?

I was born and raised in Seattle, lived in New York for a couple years, then moved back home last year. I've been writing for Dime for the last four years; I started out as a freelancer and worked my way up to Associate Editor. I'm also the Features Editor of Bounce Magazine, Dime's sister publication that is dedicated to playground ball.

My first big feature for Dime was actually on Zach Randolph back when he played for the Blazers. Since then I've done cover stories on Kevin Garnett, LeBron, T-Mac, Chris Paul, Gilbert Arenas, Michael Beasley, Tyreke Evans and Lance Stephenson. Every issue I'll usually have one or two features, plus a lot of smaller stuff, and I write for Dime's website every day. I also do some work with Sports Northwest magazine; I just recently did a piece on Joel Przybilla for them.

I just like telling people's stories. I don't try to make anyone look good or look bad; I want to tell their story as truthfully as possible and let the reader decide. When I was growing up I didn't have a whole lot of positive role models, so I'd look up to men I read about in books and magazines. Hopefully I can do the same thing for a kid out there -- tell a story of an athlete that he can see as a role model.

Another thing I wanted to bring to Dime when I first started was to give the Northwest some shine. The first thing I ever did for the magazine was an article on Kevin Love when he was at Lake Oswego. I've also done pieces on Nate Robinson, Jason Terry, LaMarcus Aldridge, Tajuan Porter, Jeremiah Dominguez, Isaiah Thomas ... I'm always trying to keep the NW on people's minds.

What was your first impression when you sat down with him the day of the interview?

I actually already knew Brandon. We played Little League football on the same team when we were probably like 10 or 11, but we hadn't really kept in touch over the years. The one thing that stood out when I interviewed him for this story was that he's genuine. Some guys give canned answers or drift into "athlete-speak," but every question I asked, Brandon actually gave it some thought before he answered. He doesn't act like the stereotypical superstar athlete, which he said in the story is how he always wants to be.

The other day, Jason Quick called Brandon the best interview he's ever come across. Agree? Your other favorites? Who would you compare Brandon to?

It sounds weird, but I'd compare Brandon as an interview to Kevin Garnett. Every time I've talked to KG, he's genuine, thoughtful and generally a nice guy. At the end of the interview, KG will say something like, "Good luck with the article," and Brandon does the same thing. Obviously Brandon isn't as much of a character and won't get as worked-up as KG, but those basic elements are the same.

The best interviews for me are just with people who are honest and give their answers some thought. T-Mac and Carlos Boozer are one of my favorites. Gilbert Arenas, Randy Foye, Mo Williams and Jason Terry are some others off the top of my head. Another guy I like talking to is Kenny Brunner. He played at Georgetown a while back and he's on the AND 1 playground team right now.

Some Portlanders believe that titles are inevitable with the team's young core. What was your take on Portland's title chances going into the interview? Did it change after you spent time with him?

It didn't really change much. Before talking to Brandon, I thought the Blazers could win a championship in the future with their current core. If anything, finding out that Brandon is such a likable guy and a likable leader helps them even more. But you know what you're getting from Brandon, and you know the Blazers will do whatever necessary to keep him. The two biggest question marks to me are whether they can afford LaMarcus Aldridge in the future, and how Greg Oden pans out. He doesn't even have to be dominant; if he's just a solid starter, I think they can win a championship building around Roy, LaMarcus and Oden.

You had a nice piece on Michael Jordan and how he would have benefited with the more lenient rules in today's NBA. One could argue that Brandon is one of the biggest benefactors of the more lenient hand check.  If guys were allowed to truly body him like they did back in the 1990s, I wonder if his impact on games might be markedly different.  Does that diminish his abilities in your eyes a little bit?

No, because you can't control the rules or the era you're playing in. I don't hold anything against Wilt Chamberlain because he was bigger and faster than everyone he played against. Same for Shaq when he was in his prime. It's something you have to consider, but a great player is a great player. I think Brandon is such a smart player who's got size for his position and a jumper, so he'd be successful even with the 1990s rules.

Who's got the best shoes in your opinion in the league right now?

On a consistent basis, Jordan still takes the crown. I actually like D-Wade's shoes over the last few years. Probably because the black/red/white color scheme goes with a lot of my clothes, and they're always comfortable on my feet.

Ohhh, red and black Wades go with your clothing?  So they match your Blazers gear, I see how it is.

I'm a Sonics fan, so I can't just 100% root for the Blazers like that -- I've adopted the Pacers as my favorite team until Seattle gets a new one. But I grew up watching Nate McMillan, I knew Brandon growing up, and Martell Webster is my fiancee's cousin, so I'm attached to that team even if I tried not to be. 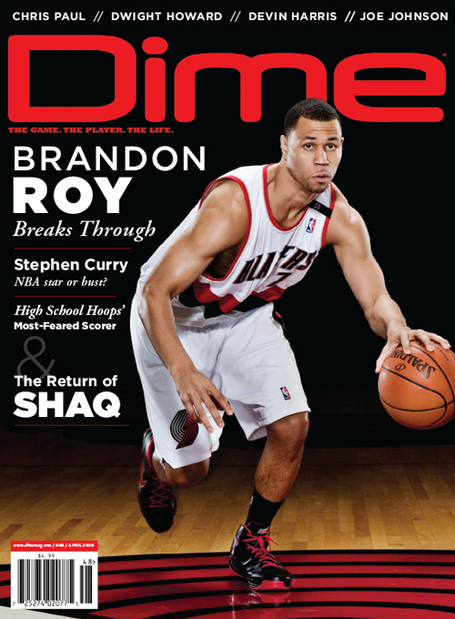 Dime #48 is on news stands now.  Show your support for Brandon and thanks to Austin by picking up a copy.

Austin also mentioned above that he writes for Sports Northwest magazine.  Be sure to check out Dave's piece on Jerryd Bayless in the April issue of that publication. There are some kix pix in there too.