First things first... join the Blazers Edge Readers Bracket Contest.  More than 200 of your fellow readers have already signed up, including luminaries like Kevin Pelton and Ezra Caraeff, so get to it. 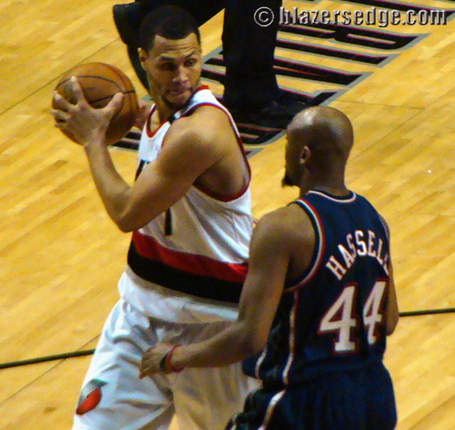 Check out this picture.  Either Kevin Pritchard is living a double life that he hasn't told us about or he's got a twin.  Either way if they make a movie about it, I'm watching. Thanks to Adam Princeton for the tip.

NBA Noise has a list of NBA players on Twitter.  Apparently Charlie Villanueva is catching heat for tweeting at halftime of a recent game. Who will be the first player to tweet from the court?

The Seattle P-I is shutting down its paper version and transitioning to web-only.

If you didn't see it last week, be sure to read Yahoo's investigative report into the recruitment of Kevin Love.  A nice follow-up article here by Brian McCormick.  And another one from Money Players.

Broken up over yesterday's loss to the Hawks?  Check out this article by Kevin Pelton for a potential silver lining.

At the other end of the extreme, having followed the Portland Trail Blazers more closely than any other team this season, it does not surprise me to see them as one of the teams that plays to the level of its competition the least. Portland has a strong record against sub-.500 teams, but has struggled to defeat playoff teams on the road.

Jason Quick does some angst-channeling for Brandon Roy.

"It's not like we have been good at home," Roy said. "I thought we looked bad against New Jersey for three quarters. Same with Indiana. Minnesota. We weren't good. We looked like we did today. It's just at home we find ways to mount that comeback."

In that article, Jason Quick has these words for the backup point guards who are both in full-blown crisis mode right now.

Rodriguez appears mentally defeated, so unsure of himself that he has become paralyzed. On Sunday, he was yanked after a three-minute stint, when on the second possession of the second quarter he committed a cardinal sin for a point guard -- being caught in the air without knowing where to pass. Stuck, he threw the ball directly to Josh Smith, and Atlanta later converted a three-point play.

Bayless, meanwhile, is a shell of the confident, attacking point guard who burst onto the scene in January when starter Steve Blake was injured. Teams have taken away his penetration by sagging off, essentially daring him to shoot from the outside, which he is reluctant to try. Meanwhile, Bayless appears anxious, as if he wants to make four good plays in one possession.

Mike Barrett has his take on the Atlanta game.

On the bus, following the game, I noticed that half of the passengers were sleeping as soon as the bus pulled away from the arena. This is almost never the case. Clearly, the emotional game Friday, long flight Saturday, and early start Sunday, took its toll. I never understood the difficulty of travel in the NBA until I started doing it seven years ago. Every team deals with it, obviously, but because of where we're located, no one logs the miles we do.

Brian Hendrickson profiles Joel Przybilla, who is said to be settling down this season like never before.

"He's so much better this year because of his confidence in himself," said Blazers assistant coach Maurice Lucas. "He's not a dominating center. He's not a Dwight Howard domination guy. And he's not like a (Andrew) Bynum who can control the middle and blocks a lot of shots high up. But he'll end up with two or three blocked shots, 13 or 14 rebounds, seven or eight points. That's perfect."

Don't feel bad if you didn't expect Aldridge to be that high on the list. To be honest, he didn't either, which speaks to the prevalence of the perception that Aldridge isn't a legitimate threat in the low post when he's not shooting turnaround jumpers. Roughly 19 percent of Aldridge's 475 made baskets this season have come by way of dunks, which is a healthy percentage for a player of Aldridge's skill set.

I was in the media room with just a few seconds remaining in the game with Kiki Vandeweghe, who is now in the Nets' front office. I asked him if he thought Batum, at 19 years old, was better than Vandeweghe thought he would be.

"I saw him in France and it was obvious he had a lot of talent," the former Blazer forward said. "But he just coasted. The night I saw him, he scored three or four points. I had no idea he would be this good this fast."

As the family was boarding their flight to Portland, Ruffin peeked into his carry-on bag at the jar of crescent gecko eggs and saw that two babies had suddenly emerged.

Keep the eggs away from Bayless. That's my advice.

I really liked Henry Abbott's 25 things I learned at MIT.

20. Mark Cuban: "Hiring coaches is the hardest job that there is. Period. End of story." Part of his assessment of Rick Carlisle, he explained, involved noticing that Carlisle very often played lineups that Cuban's database deemed to be the most effective from the available roster.

Wendell Maxey does the math to see if the Blazers can win the division.

A hold over from last week, but here's a great frame by frame photo from Sean Meagher and Bruce Ely of Aldridge punking Dampier.

Speaking of nice pictures, check out the photoshops in Bustabucket.com's look at the 10 most hated players in the NBA. The list skews heavily towards stars... none of my top 5 (Eddy Curry, Kendrick Perkins, Wally Sczerbiak, Pau Gasol, Matt Harpring) made the cut.